It’s odd, I think, that Variety‘s Justin Kroll (or his editor) would use quote marks to highlight the name of the rock group that Mick Jagger has been playing with for the last 49 years. It just seems weird that a writer or editor for the oldest showbiz trade in existence would do that. Editor: “Hey, Justin, a rock group’s name is like a play or a book title or a title of a movie…right?” Kroll: “Yeah, I guess so. It’s a performing act and you have to pay to see them….same difference.”

Quotes are a way of implying distance or a certain skeptical attitude on the part of a writer or a publication. You know…like a 1957 Time magazine story about beatniks using terms like “reefer” and “way out” in quotes? Variety referring to “The Rolling Stones” feels a bit analagous to that joke that Robert Klein told in the ’80s about the N.Y. Times always referring to male story subjects as “Mr.”, and concluding that in a story about Meat Loaf they would refer to him as “Mr. Loaf.”

You’re good for most LA Film Fest screenings and events if you have a yellow press badge, but you have to specially RSVP for certain special screenings and events. One of them is “An Evening With James Franco” on Monday, 6.20. So I RSVPed to it this morning, and soon after received this reply: “Jeffrey — We have limited tickets to this event so we’ll note your request and let you know of the status closer to the event.”

So I wrote back and said, “Can I be honest? I don’t care that much about attending this thing anyway.” In response to this the FIND publicist wrote back and said, “Jeffrey — in response to your last email, would you like me to remove you from the list?” And I replied, “No — I didn’t ask you to remove me from your list. Would you yourself like to do that? Because…what, I’m not enthusiastic about attending the Franco thing?

“Sorry but I just have no interest in attending chit-chat events that I’ve RSVPed to and then having received a response that says ‘well, we might not be able to fit you in but hang in there…maybe….we’ll see.’ Life is too short to wait on pins and needles to see if I’ll be allowed to listen to the great James Franco talk about stuff…please.”

You just get busy and pushing yourself with all these events stacked up and it all kind of gets scrambled around and…I don’t know why I posted this but on some vague level it has something to do with Franco’s post-Oscar-telecast rep and the expectation levels for Rise of the Planet of the Apes (20th Century Fox, 8.5).

Three days of coverage about Tennesse’s Bonnaroo Music Festival (or whatever it’s precisely called) from Whoa magazine‘s Jett Wells — Day One, Day Two and Day Three. Driving his mom’s car, Jett and Emily left Sunday morning from Manchester, Tennessee; they arrived back in Brooklyn at 3:15 am this morning. 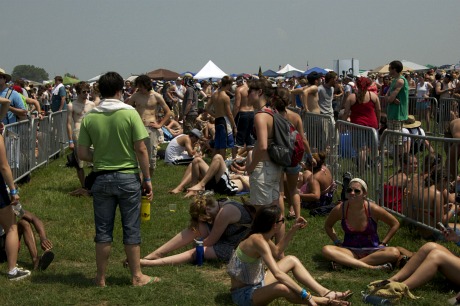 I only just caught up yesterday with Robin Harris’ 5.18.11 piece about how streaming video is bringing about the death of Bluray. It made me very, very angry. Here are several statements from the article coupled with my reactions.

Harris: “The Bluray gamble has failed. Streaming has won the war for consumer’s hearts and minds. Bluray will limp along, but the action is in streaming.”

Wells comment: In other words, access to fresh content matters much more than quality of image? I watched Mike Nichols‘ Day of the Dolphin on Netflix Streaming three or four weeks ago. It didn’t look very good at all. It looked about as clear and sharp as the worst bootlegged Bluray you might buy from a guy in the New York subway. But that’s fine with consumers, according to Harris.

Harris: “DVD/Blu-ray sales are down 20% from the year ago quarter. Yes, Bluray sales were up 10%, but the larger dynamic is that people prefer to stream video rather than buy — or rent — optical media.”

Wells comment: So most people will tolerate any visual standard as long as they’re seeing something new? Terrific. Morons.

Harris: “In the meantime, Netflix has seen its business soar, and become the largest single consumer of internet bandwidth in the US., according to Sandvine. In North America, Netflix is now 29.7% of peak downstream traffic and has become the largest source of Internet traffic overall. Translation: consumers want what they want and they want it NOW! Note that streaming is growing fast even as Bluray player penetration is still creeping up.”

Wells comment: I really don’t anticipate streaming another film until streaming quality improves. I can see streaming films in the future once fibre optic cable is everywhere, but that’s a ways down the road.

Harris: “As Philip Kortum, psych prof at Rice and co-author of the study The Effect of Content Desirability on Subjective Video Quality Ratings, put it: ‘If you’re at home watching and enjoying a movie, we found that you’re probably not going to notice or even concern yourself with how many pixels the video is or if the data is being compressed. This strong relationship holds across a wide range of encoding levels and movie content when that content is viewed under longer and more naturalistic viewing conditions.”

Harris: “The Bluray window of opportunity has slammed shut.”

Wells comment: “Bluray will thrive as long as there are people like me out there, people who appreciate image quality.”

Awards Daily‘s Sasha Stone, Boxoffice.com’s Phil Contrino and I recorded Oscar Poker #36 on Sunday afternoon. The best part of the discussion happens when we get into the waning career of Jim Carrey (Mr. Popper’s Punguins), and where he seems to be at these days, etc. Do all comedians experience a hot-flash period followed by the inevitable slowdown and decline?

Madonna‘s W.E., opening later this year from the Weinstein Co., is an oddball title. Right away I said to myself, “Nope…doesn’t work.” I’m not sure if it stands for (a) Windsor Estate or (b) Wallis Simpson and Edward VIII, or something else.

The movie is a time-jump thing “about two fragile but determined women — Wally Winthrop and Wallis Simpson — separated by more than six decades,” says the synopsis. “In 1998 Wally Winthrop (Abbie Cornish) is obsessed with the story of King Edward VIII’s (James D’Arcy) abdication of the British throne for American divorc√©e Wallis Simpson (Andrea Riseborough). But Wally eventually learns that the couple’s life together was not as perfect as she thought,” etc.

N.Y. Times guys Michael Cieply and Brooks Barnes are reporting that the big studios are feeling a bit antsy about bringing their films to ComicCon 2011. Warner Bros., Disney, DreamWorks and the Weinstein Co. are sitting it out this year, and Marvel also might not attend.

This change-of-heart is essentially due to a conclusion, they say, that ComicCon buzz about this or that film, however enthusiastic it may be inside Hall H, is hermetic and unto itself and doesn’t translate to the general public. And if your movie tanks with the ComicCon crowd then you’re really in trouble.

I’ve been pushing a general assessment about ComicCon movies for some time now. Most of them, based on comic books and video games and smothered in CG-for-its-own-sake, are aimed at undiscriminating fan boys who will give almost any film a pass and a “whoo-hoo!” as long as it echoes or flatters or tips its hat toward their secular comic-book/superhero/cartoon-favoring fan consciousness.

A result is that filmmakers like Jon Favreau have become used to the idea of making fantasy, superhero and comic-book movies for the ComicCon faithful first and then the general public second, and so the plot-driven, character-driven and/or thematic-through-line standards that Joe Popcorn might want to see inserted into films are ignored for the most part. Because filmmakers know that the ComicCon fools will cheer them on no matter how shitty their films might actually be in the eyes of God.

The bottom line, for those who care to acknowledge it, is that most ComicCon movies blow because ComicCon attendees have no taste.

This isn’t because your typical ComicCon attendee is stupid. Far from it. It’s because a typical 2011 believer sees himself or herself as a kind of impassioned monk or follower or deacon or priestess, and judges movies on the basis of whether or not they cater to his/her geek theology and criteria. ComicCon used to be about the faithful celebrating decent, good or first-rate fantasy flicks, but the bigger ComicCon has become the more it’s been about Hollywood fantasy filmmakers catering to the hardcore wackazoids.

It’s become, in short, a totally corrupted dynamic, and fervent ComicCon boosters like Ed Douglas and Katey Rich and James Rocchi wouldn’t admit this if you strapped them down on a metal gurney and threatened to saw one of their arms off. 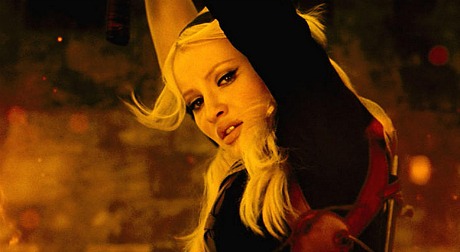 “A growing number of movie marketers are realizing” that Comic-Con “has turned into a treacherous place,” the article says. “Studios come seeking buzz, but the Comic-Con effect can be more negative than positive. The swarm of dedicated fans…can instantly sour on a film if it doesn’t like what it sees, leaving publicity teams with months of damaging web chatter to clean up.”

“Even a joyous reaction at Comic-Con, which takes place in San Diego from July 21 to 24, can skew expectations, as a platoon of studios learned last year, if hard-core enthusiasm doesn’t spill into the mainstream.”

Ground Control to Cieply/Barnes: If movies are tedious and stinky and pass along to the viewer a kind of swine-flu-in-the-bloodstream feeling, they won’t be well reviewed or be popular with Average Joes.

Ciepley and Barnes mention how ecstatic ComicCon reactions to Zack Snyder‘s Sucker Punch last summer weren’t echoed by Joe Popcorn types when it opened last March. That’s because Snyder’s imaginative compositional flourishes were overwhelmed by his attachment to deadly cliches and his mediocrity as a co-screenwriter. As I said in my review, Sucker Punch “is a digital torture device for those seeking at least a hint of compelling narrative, a tendril-ish remnant of logic, a tiny smidgen of story intelligence, and dialogue with a hint of flair or some kind of tethered-to-the-world normality.”

Disney spent millions on Tron: Legacy at Comic-Con, they report, but “a less-than-fantastic payoff” resulted when it opened last December. Uhm…could that be because it mostly stunk and because Garrett Hedlund‘s character was an idiot and because Hedlund exuded no charisma?

Lionsgate’s Buried “was promoted at ComicCon,” they write, “but the film sold just $1 million in tickets when it opened two months later.” Hello? Ryan Reynolds doesn’t get out of the coffin at the end! It’s a well-made movie about suffocating to death!

Scott Pilgrim vs. the World “was the big alarm,” they write. “That Universal movie was the belle of last year’s convention, and the studio spent heavily to make it so, draping the entire side of a skyscraper with an ad, for instance. Released just three weeks after the convention, Scott Pilgrim fizzled and the $60 million movie sold just $32 million in tickets.”

Yes! And what a glorious moment that was!