Included in Elvis Mitchell‘s November 2011 schedule for Film Independent at LACMA: (a) Luchino Visconti‘s La Terra Trema on 11.3 with Bridesmaids director Paul Feig discussing it with Mitchell afterwards; (b) Steve McQueen‘s Shame on 11.7 with McQueen and Michael Fassbender appearing; (c) an 11.10 screening of Corman’s World: Exploits of a Hollywood Rebel; and (d) an 11.16 screening of Alexander Payne‘s The Descendants with Payne, George Clooney, Shailene Woodley and producer Jim Burke.

The trailer for This Means War is probably a much better distillation of what it is — Spy vs. Spy In Love With The Same Woman — than the film itself. Two guys can’t tumble off a 15-foot balcony and crash onto a table below and then go “whoa” and shake it off and walk away like it’s nothing. When that happens you’re in McGLand. The thought of Tom Hardy soiling his rep with a slick paycheck job is depressing, but he has bills to pay like the rest of us.

“Editor’s note: Each week, Globe and Mail editors supply tongue in cheek captions to our celebrity of the week photos. This week: our Occupy Wall Street edition.” — from today’s Globe and Mail‘s Celeb Photos page. 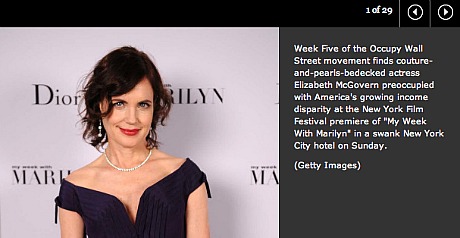 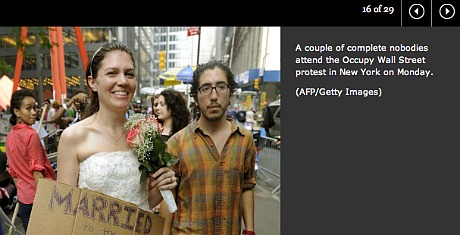 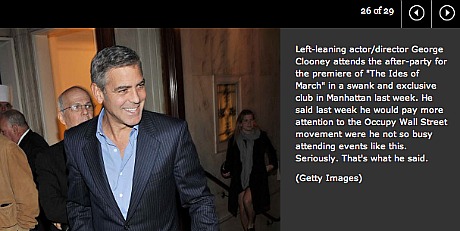 I noticed something at my 25th anniversary high-school graduation party. There’s a special gleam in the eyes of high-school grads because they’re at the beginning of their adult lives and it’s all about what’s to come…can’t wait! That sparkle seemed diminished if not sedated in the eyes of 80% to 90% of my former classmates when they were in their 40s. Here’s to those 10% to 20% who presumably still have it. If you dont have curiosity and a sense of excitement about what that curiosity may lead to, you’re dead.

It’s generally understood that a measured application of a predatory/ruthless instinct is a necessary component in any successful showbiz career. But if clawing becomes the all of it, you’re submitting to a kind of self-poisoning. I don’t even know if the predatory shark ad below (which I found through a David Poland tweet) is real or a put-on, but there’s a vibe that comes off Nikki Finke’s Deadline Hollywood game that’s part put-on and part repellent, and which speaks in any event to the lesser angels of our nature.

Patti Smith perhaps wasn’t attuned to the full upside of social network vistas when this was recorded three years ago, but in the first portion of this clip she expresses the seed of the mentality that has fed the various Occupy movements happening now. (Thanks to Awards Daily‘s Sasha Stone.)

My heart was light and gay when the news broke two months ago that Jerry Bruckheimer‘s The Lone Ranger had been kibboshed by Disney for being too costly. Now that the show is back on and set to open in May 2013, I’m sliding into the hole again. Barring some inspirational miracle, The Lone Ranger will primarily be about Bruckheimer, Depp, Armie Hammer, Gore Verbinksi and Disney stockholders making piles of money, and the rest of us submitting to a slow spiritual poisoning through IV tubes attached to our seats.

Hollywood Reporter award-season columnist Scott Feinberg invited me to talk about everything last Sunday morning. It finally posted last night. It was a good lively chat. Feinberg sounds fine. I sound like I’m talking into a tinny 1925 microphone on an overseas line.

The play bar is at the bottom of the page. There should be a separate, stand-alone mp3 URL so people can directly link to the sound file rather than Feinberg’s intro page.

When President Bill Clinton said to David Letterman last night that “one of the best things about Americans is that we don’t really resent other people’s success,” the retort should have been something along the lines of “okay, but I think they’re starting to on some level…no?”

“As the Occupy Wall Street message of representing 99 percent of Americans has spread across the country, news media coverage of the Occupy movement has spread to the front pages of newspapers and the tops of television newscasts,” The N.Y. Times‘ Brian Stelter reports in a 10.13 story. “Coverage of the movement last week was, for the first time, quantitatively equivalent to early coverage of the Tea Party movement in early 2009, according to data released Wednesday by the Pew Research Center.”

Related: “The U.S. anti-corporate movement has inspired an offshoot occupation in London,” reports The Washington Post‘s Suzy Khimm. “It will kick off this Saturday with a rally headed to the London Stock Exchange, as Dealbook notes today. OccupyLSX describes itself as part of a global movement against ‘corporate greed’ and inequality.”

Related: “With democracy in crisis a true grassroots movement pointing out the flaws in our system is the first step in the right direction. Count me among those supporting and cheering on the Occupy Wall Street movement,” Al Gore wrote last night on his online journal.

Back to Stelter: “The data confirms an anecdotal sense that the movement, which slowly gained speed last month, entered the nation’s collective consciousness for the first time last week, when President Obama was asked about it at a news conference and when national television news programs were first anchored from the Wall Street protest site.

“In the first full week of October, according to Pew’s Project for Excellence in Journalism, the protests occupied 7 percent of the nation’s collective news coverage, up from 2 percent in the last week of September. Before then, the coverage was so modest as to be undetectable by the Project for Excellence in Journalism, which surveys 52 news outlets each week to produce a weekly study of news coverage.

“The study released Wednesday showed that cable news and radio, which had initially ignored the protests almost entirely, started to give the protests significant coverage last week, often with a heavy dose of positive or negative opinion attached.”