Awards Daily today celebrated its first full year of podcasts. Unfortunately this happened to be a dull week so Sasha Stone, Boxoffice.com’s Phil Contrino and I covered the usual topics, etc. But this is a flat period right now — the calm before the storm. It was all we could do to keep from nodding off. Here’s a non-iTunes, stand-alone link.

From Matt Taibbi‘s 10.12 Rolling Stone article: “Break up the monopolies. Pay for your own bailouts. No public money for private lobbying. Tax hedge-fund gamblers. Change the way bankers get paid.”

If (and I do mean “if”) an Occupy mob was to somehow block the path of Eric Cantor‘s limousine on Pennsyvania Ave. and smash the windows and pull Cantor out and rough him up like a punk and give him a Robert De Niro-in-Taxi Driver Mohawk haircut and rip his clothes off and tie him to a tree and apply a blow torch to certain parts of his anatomy, I’d initially condemn them, as would any responsible citizen…but I’d also try to forgive.

7 Comments
Once Upon A Time

Once-legendary super agent Sue Mengers, whose career peaked from the mid ’60s to early ’80s, died yesterday. She was a bit of a terror in terms of her personality (or so I was always told) but a very tough and shrewd player. Dyan Cannon‘s character in The Last of Sheila was more or less based on Mengers. She was respected and valued and “liked”, but not especially loved…or so I gathered. Here’s an farewell piece written by Vanity Fair‘s Graydon Carter. 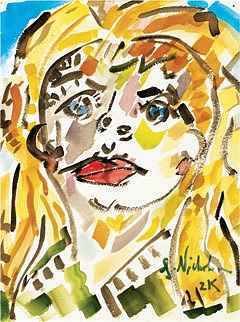 Portrait of Sue Mengers painted by Jack Nicholson, as found on this Vanity Fair q & a page.

The Guns of Navarone Bluray looks significantly better than any DVD version I’ve seen. It’s worth owning for that fact alone. Compare, also, the two screen captures and notice how the Bluray version (top) contains just a wee bit more left-right information that the DVD version. As insignificant as this may seem to Average Joes, it matters to twisted Bluray fanatics like myself.

“Playing a bad mother is more taboo than playing a serial killer,” Ellen Barkin recently told The Hollywood Reporter‘s Scott Feinberg about her role in Sam (son of Barry) Levinson‘s Another Happy Day. “It’s just, you know, the untouchable thing.”

As long as we’re talking about attitudinal undercurrents, a friend suggested this morning that Barkin’s current romantic relationship with Levinson — she’s a MILFy 57 and he’s 26 — will somehow work against the film’s rep in some vaguely values-oriented or creatively suspicious or snooty socio-cultural way. I sharply disagreed. People who work together sometimes wind up knocking boots…and so what? If the film is good then the film is good…period. If Barkin is as snappy and snarly as she seems to be in the trailer, nothing else counts.

It certainly doesn’t matter if people who like to share ideas and fluids and whatnot are 30, 20 or 10 years apart in terms of time spent on the planet. Who cares? We’re all going to die eventually so make it and get it while you can. Just don’t hurt anyone and try and be considerate and unselfish.

And I think Barkin’s f-bomb Twitter postings are kind of rad. She’s…I don’t know what she’s doing but she seems to be…what, getting in touch with her inner Bronx girl or something?

“It was hard for me, but I just kept saying, ‘You’ve just got to fucking strap ’em on, and do it, and not be afraid of them not liking you, of being a bad mother, of putting it out there — because it is out there,” Barkin told Feinberg. “That’s also how I felt very early in my career, with a movie like Diner — like, ‘Don’t be afraid to be the girl who thinks she’s ugly ’cause you do think you’re ugly, Ellen.'”

Another Happy Day premiered nine and a half months ago at Sundance 2011 (where I naturally missed it). Phase 4 Films bought it last May. It opens in New York and Los Angeles on 11.18.

Barkin and Levinson “met on the set of an indie movie” — Shit Year? — “in which she was starring and for which he had been brought on to do some emergency rewrites,” Feinberg reports.

“Barkin recalls that after Levinson had been on the set for a full week, he timidly approached her with a script that he had written and asked her if she would be willing to check it out. On the basis of the work that he had done on that film — ‘which was, compared with what they started with, brilliant’ — she agreed, went home and read it, and called him immediately afterwards to tell him she was in. She also signed up to serve as a producer of the film.”

Like any actress of a certain age, Barkin has to hustle to land meaty, attention-getting roles. She respected Levinson’s writing, like his Another Happy Day script, saw there was a good part for her, decided to bankroll or partially bankroll the film (and thereby boost her own profile and career) and then the romantic thing happened along with everything else. Apparently. That’s how it usually goes.

“His writing was just so off-the-charts,” Barkin said, “with a voice that I have never heard before. I think Sam Levinson is really one of the leading voices of a new generation of American filmmakers, and I think it’s a voice that’s going to be talking to us for decades. It’s just very impressive.”

Their relationship will last as long as it lasts. When one or the other begins to feel that his or her interests aren’t being served as well as before or he/she could do better with someone else…we all know how it works. Eat, drink and be merry, and serve the Movie Godz as best you can.

In a 10.16 post on his site, Zachary Quinto has posted the following: “In the wake of the senseless and tragic gay teen suicides that were sweeping the nation [and particularly] the suicide of Jamey Rodemeyer, it became clear to me in an instant that living a gay life without publicly acknowledging it is simply not enough to make any significant contribution to the immense work that lies ahead on the road to complete equality.

“Jamey Rodemeyer’s life changed mine, and while his death only makes me wish that i had done this sooner, i am eternally grateful to him for being the catalyst for change within me.

“Now i can only hope to serve as the same catalyst for even one other person in this world. That, I believe, is all that we can ask of ourselves and of each other. Our society needs to recognize the unstoppable momentum toward unequivocal civil equality for every gay, lesbian, bisexual and transgendered citizen of this country.”

The only box-office statistics that matter are (a) the spirited, above-average business done by Pedro Almodovar‘s just-opened The Skin That I Live In, and (b) the fact that George Clooney‘s The Ides of March dropped only 28% from last weekend. The political drama will have $7.5 million by tonight and a $22.2 million cume.