The overture fade-to-black in the West Side Story Bluray starts at the 29-second mark. The video is from the British Bluray, which arrived today. It comes from the same high-def master that was used for the U.S. version that streets on 11.15.

I completely agree with an opinion by Rope of Silicon‘s Brad Brevet that the cow-being-killed clip in Ridley Scott and Kevin McDonald‘s Life In A Day (around the 43:35 mark) is appalling and sickening. The poor beast senses what’s about to happen and…I don’t want to talk about it. But it’s awful. Otherwise I found the first half of this film (I’m watching it on the flight back to L.A.) slightly boring.

Way back when people from Georgia used to speak with delicate Georgian accents. I remember hearing them at gas stations and diners when I drove through Georgia on my way to Florida. Vivien Leigh‘s Scarlett O’Hara spoke like a Georgian. Jimmy Carter still does, pronouncing “oil” as “awwl” and so on. But I heard no Georgian dialects during my three and a half days in Savannah. Okay, one or two but just about everyone sounded like they came from Connecticut or Maryland.

I’ve long admired a certain veteran publicist for his ability to remain completely focused and lucid while letting go with red-faced rage. It’s a bad idea, of course, to let emotional ferocity color any sort of discussion, but a lot of people go there regardless. Some of us can hold on to our thoughts after getting pissed, but a lot (most?) of us can’t. Anger makes you spit and sputter and your sentences sound lumpy and primitive. The angrier you become the less able you are to deliver your points with any finesse. But this publicist, whom I worked for in the ’80s, used to let people have it with both barrels and still debate with knife-like precision. That’s a mark of exceptional intelligence.

Sam Levinson‘s Another Happy Day, which has been on the film festival circuit since bowing last January at Sundance and which will open on 11.18, played last night at the Savannah Film Festival. It’s definitely not The Family Stone, as Levinson exclaimed during the q & a. And it has “Red Twitter Queen” Ellen Barkin delivering the most searing, over-the-waterfall performance of her life as one of the most sensitive and well-intentioned crazy-torpedo moms of all time.

Barkin and Levinson talked a bit after the film ended, and I was there in the second row.

Day is a black family comedy without much serenity or calm or closure to pass around. It has teeth and rage and drug abuse and all the rest of that good stuff that has fueled miserable family dramas going back to Eugene O’Neil‘s Long Day’s Journey Into Night and James Goldman‘s The Lion in Winter…but with cryptic laughs. Everyone is hurting, seething, crippled, screaming, cutting themselves, depressed, despairing…you name it.

As Katherine Hepburn‘s Eleanor of Acquitaine says in Winter, “What family doesn’t have its ups and downs?”

It’s about the mother of all dysfunctional family wedding parties (in the Saddam Hussein sense of the term), and particularly about Lynn (Barkin), a mom with an aching heart and a quivering lower lip with a pathological need to constantly express anguish and relive painful moments in her life, and if at all possible to goad others into dredging up their own bad business.

She sees herself as a battered victim and a hard-bitten survivor, and she has taken her lumps, for sure. But she’s made a fetish out of suffering, and she can’t seem to let it go.

I have to stop filing because I have a 5 pm plane to catch, but Barkin’s costars are quite the handful — Kate Bosworth, Ellen Burstyn, Thomas Haden Church, George Kennedy, Ezra Miller, Demi Moore, Michael Nardelli.

I’m supposed to speak to Barkin and Levinson sometime later this week so I’ll pick it up then.

I’ve told a few journalist acquaintances about a Sundance condo share…zip. They’re all set up elsewhere and/or can’t be bothered to reply so I’m going public. It’s a very large & spacious one-bedroom apartment at the Park Regency that easily accomodates three (i.e., myself and a journalist friend plus tenant X.) There’s a whole separate bunk bed area for the third person. The rental term is Saturday to Saturday so we’re taking it for two full weeks (1.14 through 1.28) for $2675. Divided by three = $891 or $89 per day if you’re Sundancing for the full 10 days.

The place has one regular big bedroom (me) with a full bathroom that I can share with someone, two bunk beds in their own area and a living room couch-bed with another full bathroom. It’s not cramped, there’s a decent amount of breathing room, the wifi is solid and it’s ideally located. Walkable to Eccles, walkable to Yarrow, totally walkable to Park City Marriott. It has a shuttle service that takes you anywhere. Big lobby with fireplace, free coffee, heated pool, etc.

$891 and $89 a day for the whole thing sounds pretty good to me, and there’s even room for four if the two newbies don’t mind bunking it down in the same alcove. Four would work out to $668.75 each. I’m always gone in the morning and don’t return until 11 or 12 midnight so I don’t care. Strictly for crashing and showering.

A filmmaker friend saw The Descendants last night (i.e., Sunday) at West Hollywood’s Soho House screening room. “Amazing movie, should go all the way,” he wrote. “The whole cast including George Clooney and Judy Greer plus all the kids were there along with [director-writer] Alexander Payne w/ Pacino, Jack N., Reese W. and Albert Brooks in the audience.

We’re on the same page then, I replied. “It’s got to be the front-runner,” he said. “And Clooney for Best Actor. Shailene Woodley could get nominated and maybe Judy Greer also on the basis of just four scenes.” Three scenes, I countered. “No, four,” he replied. “Beach, house X 2, hospital.” (I’m not going to explain this.)

“Wasn’t Robert Forster‘s cranky granddad good also? That early scene when he berates Clooney for not providing ‘more thrills at home’ and then later when he says ‘she was a devoted and loyal wife and deserved better.’ A lesser director-writer would have had Clooney say a little bit more in response and perhaps even spill the beans, but instead he just eats it. (I’m not explaining this either.)

“All brilliant,” he said.

Late this morning I finally saw Neil Labute‘s Sexting, an eight-minute short that premiered at Sundance 2011. A typically sharp and blunt LaBute piece. It’s basically Julia Stiles as the proverbial girlfriend talking straight into the lens but actually or anxiously to the wife of the married guy she’s been having an affair with. The nature of their exchange is hinted at around the 25-second mark. 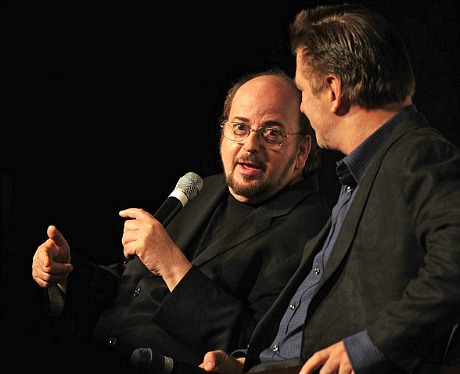 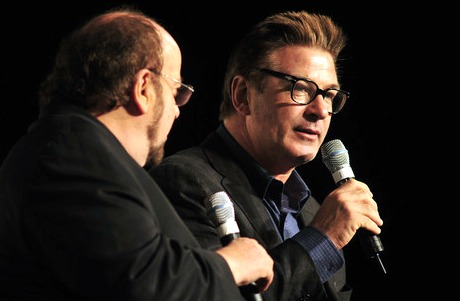 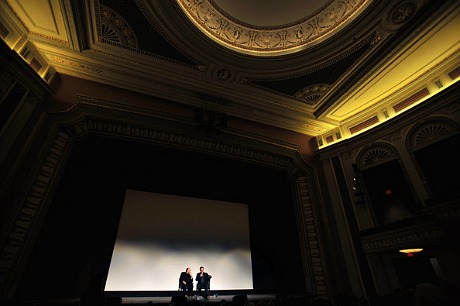 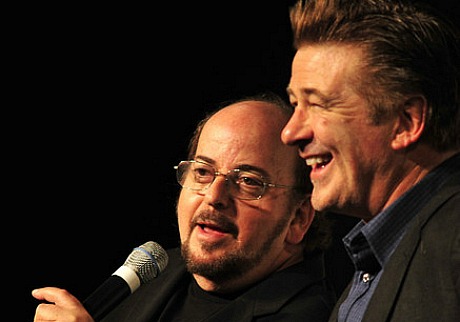 Five Savannah Film Festival-visiting entertainment journalists — myself, Awards Daily‘s Sasha Stone, Hollywood Reporter‘s Tim Appelo, critic Todd Gilchrist and CHUD’s Renn Brown — took part in a confession session this morning with about 25 Savannah film students. It happened in the plush lobby of the Marshall House, and it began, believe it or not, at 8:15 am. Here’s an mp3 file containing some of what was said.