Ratner’s statement: “As a first step, I called Tom Sherak this morning and resigned as a producer of the 84th Academy Awards telecast. Being asked to help put on the Oscar show was the proudest moment of my career. But as painful as this may be for me, it would be worse if my association with the show were to be a distraction from the Academy and the high ideals it represents.”

Academy president Tom Sherak‘s statement: “[Ratner] did the right thing for the Academy and for himself. Words have meaning, and they have consequences. Brett is a good person, but his comments were unacceptable. We all hope this will be an opportunity to raise awareness about the harm that is caused by reckless and insensitive remarks, regardless of the intent.”

I predicted yesterday morning that the Brett Ratner “fags” controversy would last between 24 to 72 hours. And I honestly though it might start to go away last night when Academy bigwig Tom Sherak told Deadline‘s Mike Fleming that AMPAS would let Ratner slide as long as he doesn’t toss any more verbal stink bombs between now and February’s Oscar telecast. 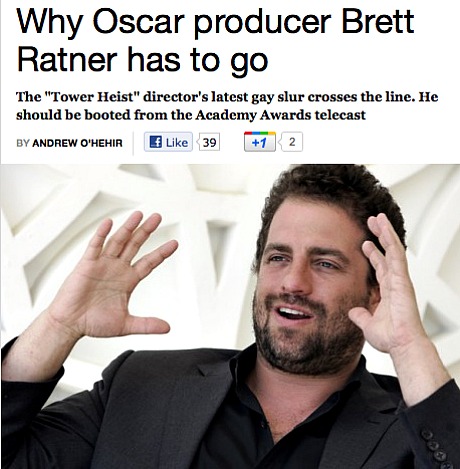 But less than an hour ago TheWrap‘s Steve Pond reported not only that “a tense silence” is seeping out of the Motion Picture Academy “as the drumbeat of disapproval grows” over Ratner’s public statements over the past few days”, and that the org “declined comment on Tuesday as word spread of a sexually-explicit interview with shock jock Howard Stern on Monday.”

Pond also reports that he’s “surveyed a number of Academy members on Tuesday morning, [and that] none were willing to support Ratner. The ones who didn’t shy away from the question altogether said the producer had to go.”

On top of which Salon‘s respected Andrew O’Hehir posted a “Ratner’s got to go” essay this morning. “So far the Academy seems to be standing behind him, after insisting he issue the usual wimpy non-apology,” O’Hehir noted. “[But] that’s not enough: He should quit or be fired, and the Academy needs to hear that loud and clear from the press and the public.

“I’m not proposing blacklisting Brett Ratner, or depriving him of his livelihood or his inalienable right to inflict stupid comedies on us every couple of years. (If rehearsals are for fags, maybe he needs more fags on the set.) It isn’t censorship or prudishness to say that he no longer has the right to be a public face of the film industry, which, amid all its crass commercialism and anti-intellectualism, has long prided itself on providing a nurturing environment for gay people when the larger society was overwhelmingly hostile.

“It isn’t complicated: There’s a line there, a line consisting of common decency and ordinary courtesy, and Brett Ratner has repeatedly crossed it. Let’s make clear to the Academy that he’s got to go.”

When and from where will the next shoe drop?

Clint Eastwood‘s J. Edgar currently has a lousy 45% Rotten Tomatoes rating, and my guess is that this number isn’t going to rise very much between now and opening day (i.e., Wednesday). But a portion of the Friends-of-Clint Club (i.e., NY & LA elites who’ve generally stuck by him and have occasionally found ways to give even his lesser films a pass) are giving their approval. These include N.Y. Times critic Manohla Dargis, The New Yorker‘s David Denby, MSN critic Glenn Kenny, etc. Richard Roeper is actually calling J. Edgar “one of the best films of 2011.”

“It’s not bad for what it is,” I wrote last weekend. “No, better than not bad. ‘Decent’ is a fair term to use. It’s Clint’s version of Brokeback Mountain, in a sense, and is finely performed and professionally assembled, etc. But for all the things it does right and despite that feeling of rock-bottom assurance that an Eastwood film always provides, J. Edgar is a moderately boring film, at times in an almost punishing way. Mostly because it’s a profound drag to spend time with such a sad, clenched and closeted tight-ass.”

Update: In Contention‘s Kris Tapley has just tweeted “kudos to the precious few willing to review just J. Edgar, [and] not Eastwood’s impressive directorial spryness at this stage of his career.”

Screenwriter Aaron Sorkin (Moneyball, The Social Network) has written a short Vanity Fair piece about the personality and temperament of David Fincher, director of The Girl With The Dragon Tattoo and, of course, The Social Network. Here are the portions that I like the most, in my own order and with edits:

“For three months leading up to the Oscars we’d been going head-to-head with the eventual Best Picture winner, The King’s Speech, and six hours after David lost [the Best Director Oscar] to that film’s director, Tom Hooper, he sent me an e-mail with his unused acceptance speech attached. It began, “We’ve finally answered the question, ‘Apples or oranges?'”

“Off the top of my head I can think of 10 people who cared more than David did when his name wasn’t called. I don’t want to give Academy members the wrong idea — he respects the Academy and its highest honor — he just doesn’t cry over spilt milk. David doesn’t cry over anything. My guess is that his single biggest reason for wanting to win was to avoid having people offer condolences for not winning.”

“David Fincher in a bad mood isn’t easy to discern from David Fincher in a good mood. Fincher tired is the same as Fincher energized. There’s never anything about his demeanor that asks you to ask, ‘What’s wrong?’ This might be what people mean when they talk about strength. Also focus.

“David has great patience with people who aren’t as gifted as he is. What he can’t abide are people who don’t work as hard as he does. And he won’t work with people who don’t care as much as he does. Everyone who works in Hollywood has two personalities: their real one and the one assigned to them by rumor. The rumor about David is that he’s gruff, harsh, and difficult to work with. The truth about David is that he’s warm, honest, and an exceptionally generous collaborator. He’s fine with the rumor.”

Haywire proved again that Steven Sodberbergh kills every time he decides to do a crime-action movie. (Excluding the Ocean’s films, of course.) I realized this morning that the same incandescent mentalities who declared that Haywire is “not very good” (air agnes) or “meh…kind of dry and slow-moving” (Alex Billington) are cousins of those who complained that the warehouse shootout scene in Soderbergh’s The Limey (’99) sucked because it doesn’t show anything. 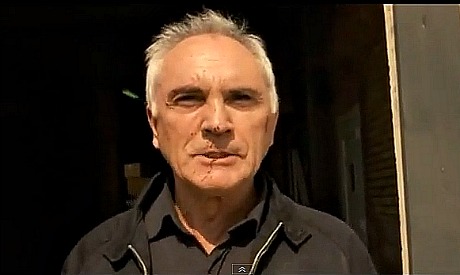 Yesterday a registered letter arrived from Rome’s Corpo di Poilizia, informing that I owe them 105 euros and change for a traffic violation that happened on 5.23.10. Except I was never pulled over and given any kind of ticket or verbal warning…nothing. I don’t know what I did wrong (the infraction number is 13101230071/10) but whatever my crime it must have been traffic-cammed. Before yesterday afternoon I’d never been handed a special delivery letter from any foreign city or nation informing me of a traffic violation, let alone one that allegedly occured 18 months ago.

I somehow got hold of this early-stab, never-used Sexy Beast poster after catching it at the Toronto Film Festival in September 2000. I brought it home in a plastic tube and had it mounted on foam core. It felt too extreme for framing or hanging on a wall, but it does reflect the horrific madman humor in Ben Kingsley‘s Don Logan character. 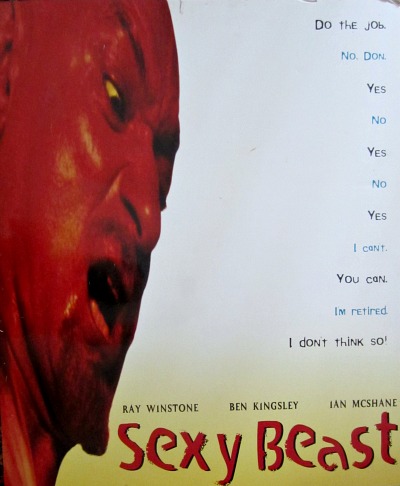 “Retired? Fuck off, you’re revolting. Look at your suntan…it’s like leather, like leather man, your skin. We could make a fucking suitcase out of you. Like a crocodile, fat crocodile, fat bastard. You look like fucking Idi Amin, you know what I mean?” 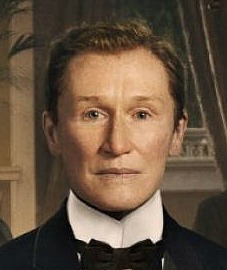 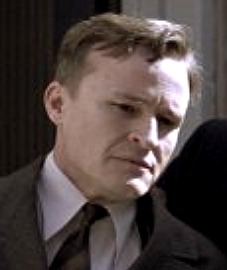