With great effort, director-screenwriter Larry Karaszewski has found an Australian print of Frank Perry‘s Last Summer, and will be screening it on 1.19 at the Egyptian Theater. Star Barbara Hershey, who was so influenced by the film that she changed her name to Barbara Seagull for several years based on a scene in Last Summer, will join Karaszewski for a post-screening q & a.

Here’s a Last Summer trailer that Karazszewki cut together,

Also coming up on February 4th is a screening of The Loved One plus a reunion of the cast and crew including Robert Morse, Jonathan Winters and Haskell Wexler.

I should have linked earlier today to a 1.10 Guardian piece by Joe Uitichi about Artist blowback. Key graph: “Empire‘s Damon Wise believes that most mainstream criticism is nowadays based around finance and marketing rather than the real worth of a film. ‘Is the film commercial, is it awards-friendly, or is it both? Contrarian reviewers imagine themselves to be somehow part of that process, and a film like The Artist is complete bait for that kind of reporter.”

The Salt Lake Tribune‘s Sean Means interviewed me a lonnng time ago about Sundance 2012, and now here it finally is. The piece, I mean. Myself and a few others (David Poland, Jen Yamato, Omar Moore, Peter Knegt, Ray Pride) listing the films they’re most looking forward to when the festival kicks off. Only nine days from now.

All but buried on Deadline is Pete Hammond‘s 7.10 story about the thirteen classic films being restored by Universal to honor its 100th anniversary, and slated for Bluray release between now and the end of the year. Hooray for Universal and shame on those studios who’ve failed to honor their classic films in a similar fashion. Like Paramount, for example, which as far as I know is still refusing to create a Bluray for George Stevens‘ Shane. Dilletantes!

The Bluray kickoffs are Robert Mulligan and Alan Pakula‘s To Kill A Mockingbird (1.31), and Lewis Milestone’s All Quiet on the Western Front (2.14).

The restoration process for each film took up to six months and cost anywhere from $250,000 to $600,000 a title. Plans are being drawn up to tour the films as well, and the blueprint is to accelerate restorations in the future.

“I would like all of our films to be restored,” Universal honcho Ron Meyer told Hammond. “And hopefully as the years go on more and more of them will be done. I think we need to do more film restoration. All of us need to do it.”

Are you listening, Brad Grey? The ghost of George Stevens is hovering above Paramount as we speak, flipping the bird at you and your Paramount Home Video vision-free underlings.

I’ve been led to believe (perhaps unwisely) that this is the new official Iron Lady one-sheet. For what it’s worth I think it’s okay. Any one-sheet that eschews the obvious in favor of a metaphor gets my vote. It’s obviously pitching to independent-minded women. (I think.) Thatcher might have been an elite-favoring conservative, but she stuck to her guns. The blue Asprey bag was some kind of signature thing. 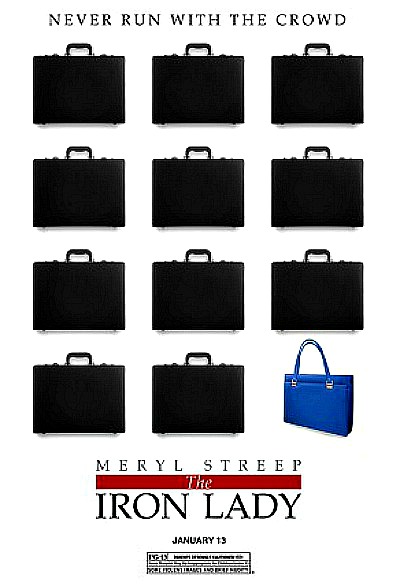 My wifi has all but totally collapsed due to a barely functioning modem. (A replacement will arrive tomorrow morning.) After 45 minutes of swearing and re-booting and calling the Time Warner autobots here are the first five minutes of Steven Soderbergh’s Haywire.

10 Comments
All Younger Then

I did a Movieline sitdown with Leonardo DiCaprio at The Grill in Beverly Hills about two years prior to his April 1995 appearance on Late Night with David Letterman. Razor sharp, he was. Crackling energy. And trusting (as many younger guys tend to be.) It’s a little hard to absorb or accept that this happened almost 20 years….whoa. Time moves relentlesly, and does not suffer fools.

Ignore George Lucas‘s Daily Show comment (delivered last night) that Red Tails (20th Century Fox, 1.20) is as close as he’ll ever come to making a sequel to Star Wars. The thing to focus on is his claim that Red Tails is essentially a 1942 movie (like the 1951 Flying Leathernecks, Lucas said). The heavily CG’ed look argues with that notion up and down. If it looked and felt like a real 1942 film, I’d be the first one there on opening day. 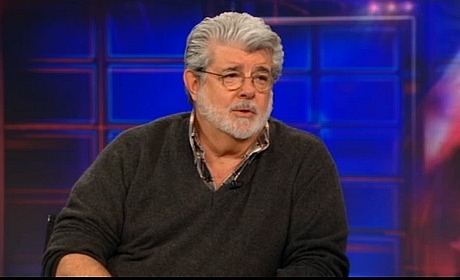 I wrote the following in a July 2011 piece called “World War II Video Game“: “Could the World War 2 dogfight sequences look any more fake? What a non-pleasure it’ll be to wallow in visual values and terms that have nothing to do with 1940s verisimilitude and everything to do with Lucas wanting to slick this thing up as much as possible.

“Lucas has been struggling with this sucker since filming began in March 2009 and reshoots happened in March 2010. Obviously it’s a troubled and ungenuine enterprise. Failure of this sort couldn’t have happened to a nicer guy. The director of record is Anthony Hemingway.

From the Wiki page: “Production began in March 2009. Principal photography took place in the Czech Republic, Italy, Croatia and England. Lucas took over direction of reshoots, in March 2010 as Hemingway was busy working on episodes of the HBO series Treme. Hemingway will have final approval over the footage.”

Awards Daily‘s Sasha Stone and I finally got around to last weekend’s podcast last night. The obvious big topics were (a) the surprise inclusion of Dragon Tattoo‘s David Fincher among the five DGA nominees, (b) the surprising DGA shutout of Steven Spielberg and the all-but-certain Oscar demise of War Horse, and (c) Sasha’s feelings about A Separation. Here’s a stand-alone mp3.