“Do you think they’ll ever make a movie about a big-market baseball team, and they have the money, and they still suck?” Last night Jon Stewart asked Brad Pitt why Oscar movies don’t go negative on other movies like Presidential candidates do in political campaigns. Uhm, well…in my own modest and personal way I’ve been engaged in surgical negative Oscar campaigning for years now. No biggie, just saying.

I dropped by my place during my visit to Los Angeles and picked up a just-arrived Bluray of Billy Wilder‘s The Apartment, which I’d ordered via Canadian Amazon. Joseph LaShelle‘s black-and-white Scope images are radiant and shaded and really beautiful this time out. I felt as if I was truly seeing them for the first time. They’re clean and film-like and yet not, to my eyes, scrubbed or DNR’ed. The best part? You can see the eyeliner and face powder on everyone. Even on Jack Lemmon, Fred MacMurray and Ray Walston. 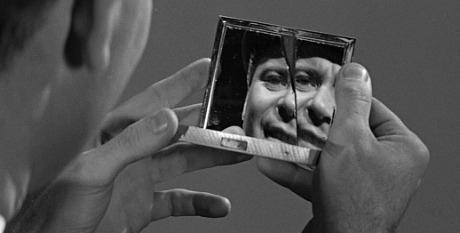 Honestly? I’m on the fence about doing South by Southwest this year. Am I going to spend at least $1000 to $1200 (and probably closer to $1500) on basics to fly there and stay in a flophouse so I can see…what, 21 Jump Street and one or two other films that might be worth the hassle and expense? This is my concern, dude. I’m not saying the value isn’t there. I’m saying I don’t see it yet. This is a process, not a judgment.

Last year Bridesmaids debuted in Austin, and so did Undefeated, Weekend, Natural Selection and The Beaver. For me there was also Buck, although it had premiered at Sundance 2011. What is playing there this year that might be equal to this? Beats me. So I asked a few people for thoughts.

“I think it’s a pretty sensational line-up on paper,” replied Hitfix‘s Drew McWeeny. “SXSW was built on the low-fi, the marginal voices. It’s only really been the last five or six years where they’ve made the effort to balance the big and the small, the broadly mainstream and the intensely personal. They don’t do the same kind of Hollywood movies that Cannes does, for instance. I would argue SXSW has more idiosyncratic taste in terms of what they call ‘Hollywood.’ I doubt Cannes would play Observe & Report, but they sure were glad to show Pirates of The Carribean 4.

“I think if you don’t embrace each festival for its individual voice, then you probably shouldn’t go. Sundance is not Berlin is not SXSW is not Cannes is not Toronto. SXSW is sort of brash and scrappy and has a distinct attitude. It is in every way an Austin festival. I really liked what Matt Dentler did with it, but I would argue that Janet Pierson and her team have taken huge, huge strides in terms of cementing a place in the festival world that I would argue is as vital as any other fest out there.

“Cabin In The Woods makes huge sense for them. It’s not just a good horror film, it’s also a crazy clever meta-argument for why horror films matter at all and why we need red meat in our movie diet. 21 Jump Street makes sense the same way. The film is aggressively funny and a very sharp rip on the entire notion of updating TV shows for the cheap nostalgia cash-in. For the studio making a reboot of Spider-Man and a Men In Black 3 this summer to release a film that farts in the face of franchise thinking with as much cheek as 21 Jump Street, it’s downright punk rock.

“And if you’re still undecided, just read the plot synopsis for Frankie Go Boom. And I quote: ‘A flick by Bruce about his little brother Frank who’s a crybaby fuck who shouldn’t do lame-ass embarrassing shit if he dozn’t want people 2 see it.”

“If you’re not in by now, don’t book the plane ticket. Someone else can use your seat in the theater.”

I responded to McWeeny as follows: “I’m not looking for star-power. And I’m not looking for Sundance or Toronto or Berlin or anything other than a good nourishing film festival. I just don’t want to be asking myself on day #3 or #4 ‘why did I drop $1500 to come here?’ I’ll tell you right now that movies like Frankie Go Boom are DEFINITELY NOT WORTH MY HARD-EARNED CASH. Fuck it if that’s the cream of the crop. I’m just asking where are the three or four films that I’m probably going to feel really bad about missing?”

A fellow journalist said roughly the same thing: “I debated going myself, but the real motive is not to miss anything.”

A near-miss on the 101 Freeway early this afternoon left me hugely impressed with my driving skills. I was next to the farthest left lane, speeding along at 75 or so when a young Asian-American woman in a white Honda SUV turned sharply left without a signal. She was just a few feet ahead. I’m sure I was in her blind spot. This is why they tell you to quickly look over your left shoulder before changing lanes. 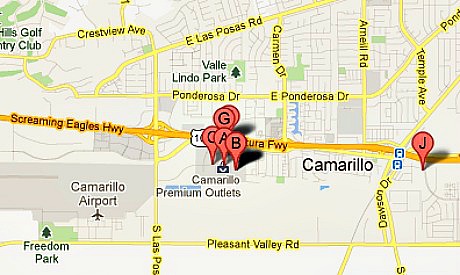 I was breaking the law myself by talking on my cell phone, holding it to my right ear with my right hand. And I was concentrating on expressing a complicated thought when it happened so I wasn’t really paying attention. But the same instant that SUV lady barged into my lane, I veered to the left less than a split-second later, and a collision was barely avoided. “God, I’m good!,” I said to myself five or ten seconds later. Thank fortune there was no one in the far left lane in my blind spot.

SUV Lady obviously saw that she almost hit me and retreated to the middle lane, but then veered left again three seconds later and passed some other guy, and then went back to the middle.

A minute or so later I drove alongside her vehicle to check her out and see if she was loony-looking or whatever. She was young and fairly attractive and not on her cell phone, and not looking or even glancing my way. Or she saw me coming and figured, “Okay, here comes that guy I almost hit….I’m just gonna stare straight ahead and pretend he’s not there.” I eyeballed her all the same, made her think about it. I just saved you and me a heap of trouble, Miss Saigon. Drive a little more carefully next time.

Markus Schleinzer‘s Michael, a “somewhat chilly, jewel-precise” study of an Austrian child molester, “is the absolute best film I’ve seen at the 2011 Cannes Film Festival so far,” I wrote on 5.14.11. “It isn’t pleasant to watch, but it’s briliiant — emotionally suppressed in a correct way that blends with the protagonist, and aesthetically disciplined and close to spellbinding.”

Michael will play at Manhattan’s Film Forum from 2.15 through 2.28. An absolute must-see, if only to get into the argument.

I wrote the following reply to a Glenn Kenny post on 5.14: “Those who wrote or implied that Michael is ‘Haneke-Lite… sadistic sucker bait for rubes who can’t distinguish faux art film from real’ are playing a familiar game…they find a film emotionally discomforting so they resort to the default dweeb putdown — i.e., you’re just not smart or educated enough to understand what a sucker you are. I’ve seen Michael & I know what it really is, and what astonishing & stunning bullshit this is from the ‘pallies’ who are using the elitist line.”

Knowing I’d worked for Cannon Films in the mid to late ’80s, a guy asked me this morning about Dolph Lundgren and the making of Masters of the Universe . I replied as follows: “All I did was write the press notes and visit the set, once. I remember very little because I knew it was a cheeseball enterprise from the get-go and I didn’t give a shit about any of it. The idea of the Golan & Globus machine attempting to arouse the geek/comic-book fanbase was hopeless from the start…pathetic.”

“What was the atmosphere at Cannon when the film opened with close to no publicity and flopped?,” he wrote back. “Everyone knew it was a tank early on so there was this air of funereal resignation all through production and post-production…everyone just going through the motions,” I answered.

Let’s at least acknowledge what I’ve been told again and again and again about the fate of Miss Bala. The main reason it didn’t get nominated for a Best Foreign Language Feature Oscar is because progressive-minded industry women didn’t approve of Stephanie Sigman‘s Laura Guerrero being constantly intimidated and pushed around. They wanted to see her stand up in Act Three and take charge of her fate. Films about women that fail to endorse and affirm the prevailing p.c. doctrine do so at their own peril — that’s a fact.

Yesterday afternoon (as I was politely firing my old accountant and meeting with my new one) Rope Of Silicon‘s Brad Brevet pointed out how oppressive regimented flashback sequences have become (i.e., always some of dreamtrip effect, always a different film stock or texture), and how ingenious it was for Alfred Hitchcock to invite those 1940 audiences watching Rebecca to — horrors! — imagine the details as Laurence Olivier recalled the take of his late wife’s accidental death. The sequence starts somewhere around 3:20, but doesn’t really kick in until 4:00 or thereabouts.

Due respect to Michael R. Roskam and the Bullhead team, but I was fundamentally uncomfortable with the story of a primitive, inarticulate, bull-like Belgian guy with no balls. Literally. Having been more or less castrated as a youth by a neighborhood psychopath. I disengaged and in fact ran the other direction from this film so fast it wasn’t funny. Life is hard enough when you have a pair. And the Academy foreign branch preferred this to Miss Bala? 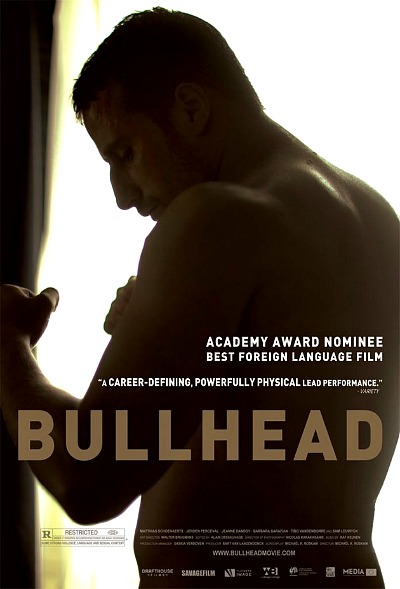 Is this another teaser-for-a-Superbowl-Dictator trailer or the actual Superbowl spot itself? The only original material is (a) “Hey, America, I bought NBC!” and (b) the track-race sequence. The “what am I, a Kardashian?”/”No, you’re much less hairy” exchange was in the original teaser.

TV ad guys trying to reach Joe Superbowl know that however attuned or even brilliant he might be about sports, when it comes to movies he’s half-bombed and/or half-retarded. His eyelids are at half-mast, he’s slow on the pickup and his pants are halfway down around his ankles. You have to keep it primitive, primitive, primitive. And repeat stuff. Think I’m being dismissive? Ask any marketing guy with any of the big studios.

This went up sometime late yesterday. Forgive me for taking one night off and going out to dinner at Genghis Cohen. Fifty lashes. The sense of peace and well-being that came with hooking up with a new, obviously together accountant was so enveloping that I went into a kind of bliss-out mode and forgot myself for a few hours.