To Catch a Thief (Paramount Home Video, 3.6) “looks marvelous on dual-layered Blu-ray. Everything tightens-up impressively and the contrast takes notable strides in the 1080p resolution. Colors also appear to improve with better balance in the presentation that has more than 4X the bitrate of the last SD transfer. A fair dusting of grain, no disturbing noise, no signs of digital manipulation. By far the best viewing I’ve ever had of this film. Beautiful.” — DVD Beaver‘s Gary Tooze. 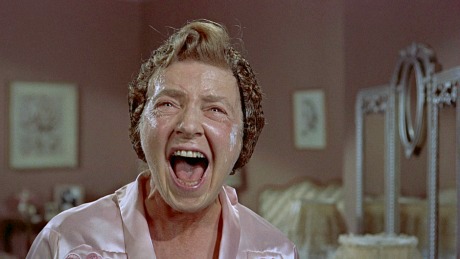 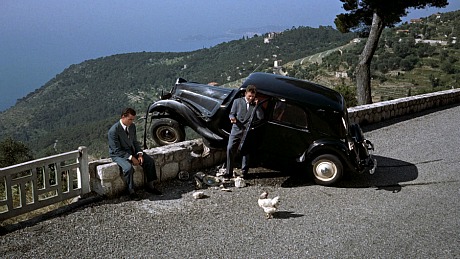 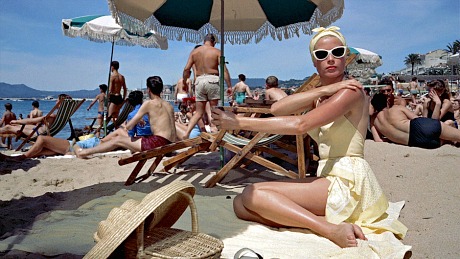 In the wake of this afternoon’s Deadline report that the Academy has reversed course and will now permit Sacha Baron Cohen to do with his red-carpet routine to promote The Dictator, MCN’s David Poland is tweeting “Wow…if Nikki Finke is correct, a new precedent is being set for the Oscars. And I expect people to be fired.”

This, I’ve long believed, is Poland at the nub. When some person or company has been judged to have seriously erred through stupidity or clumsy politics or has otherwise dropped the clay vase on the stone floor, there is only remedy in Polandworld — i.e, severe punishment. People must lose their jobs and/or be tarred and feathered. They must be wounded economically. They must put out their hand and the hand must be cut off with a sword. No wrist-slaps, no admonishments, no probations. Arterial blood must soak the sand.

The blood, it it happens, is over a possible scenario that’s being discussed by Poland and Harold Itzkowitz, to wit: that the Sacha Baron Cohen banned-and-then-allowed-to-walk-the-carpet story is/was (a) a stunt and, (b) that it’s “looking more and more like [it] was orchestrated with Finke & Sherak, not just WME & Paramount].”

One of them commented earlier in the thread: “Is every call by the new Academy team going to be another Brett Ratner moment?”

My point (apart from the particulars of this story, which I know nothing about one way or the other) is that while the stories may change from month to month, Poland’s appetite for Jihadist vengeance remains constant.

Poland inqures: “Paramount spokesperson officially denies N[ikki] Finke, who initiated & promoted a ‘controversy,’ is being paid to shill 4 The Dictator.”

I wrote this right after the 2.16 Wanderlust premiere in Westwood, and then pulled it due to embargo restrictions: “Certain…okay, several portions of David Wain‘s Wanderlust (Universal, 2.24), a snappy satire of straightlaced vs. hippie-ish values and lifestyles, aren’t half bad. That’s not to say I laughed out loud, but I was quiety amused by much of it. And the crowd at the Village tonight was having a pretty good time. 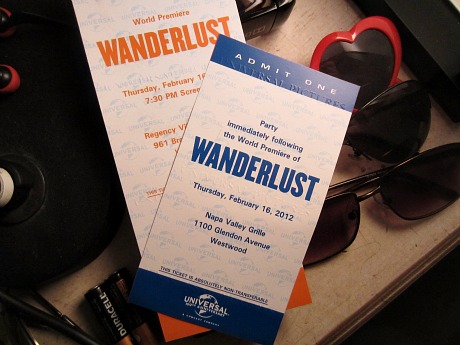 “Wain and Ken Marino‘s screenplay is about a pair of anxious urban marrieds (Paul Rudd, Jennifer Aniston) toying with life at a well-tended hippie commune in Georgia when their…well, when Rudd’s New York job disappears. The film wrenches gags out of Rudd-Aniston reacting to (and in some ways blending in with) the sensual, free-form, flaky aspects of freako life — all very easily satirized — and then Rudd-Aniston pulling up stakes at the last minute and going, “Whoa…enough of that!” And the entrepenurial tidiness of the wrap-up is a bit much.

“Are there any hippie communes in 2012? Didn’t they all fade out about 30 years ago? No matter. The point is that Wanderlust ultimately says hippie life is open and free but also a form of kool-aid fraudulence, and that for all their hang-ups yuppie rat-racers are the real stand-up deal. So while it throws out some very sharp social barbs, particularly at an arrogant, nouveau-riche couple and local news twerps, at heart Wanderlust is a rather timid, conservative-minded comedy.

“Onemarital infidelity scene involving Aniston and another guy happens off-screen (too shocking to visualize?) and another — i.e., going topless before local news cameras — is pixellated. Why do this if you’re going to candy-ass out?

“The film basically says it’s best not to wander too far from your safe middle-class behavior zones. Or, alternately, that a little hippy-dippy in your life can be a fun thing for a week or two, but don’t dive into it whole-hog. Go back to the big city and get a job, big guy! I have a feeling that George and Laura Bush will love it.

“Justin Theroux (Aniston’s current b.f.) is pretty good as the most charismatic guy in the hippie clan. Ditto Alan Alda as the doddering founder of the hippie retreat and owner of the land and estate. Also fine are Malin Akerman, Lauren Ambrose, Joe Lo Truglio, Kathryn Hahn and Melissa Joan Hart.”

It’s been announced that the L.A. Times is going with a paywall on March 5th. Meaning that if I want to continue to read film industry coverage by Patrick Goldstein, Steven Zeitchik Nicole Sperling and John Horn on a wide-open basis, I’ll have to cough up (a) $1.99 per week in a package that also includes the Sunday newspaper (which is a no-go — the idea of that all-but-worthless mass of tree pulp being dropped on my doorstep every Sunday is repulsive) or (b) digital-only access at $3.99 per week. Online access will be included gratis for print subscribers.

In my mind the L.A. Times is a moribund and unnecessary thing save for the output of the above. I’m honestly not sure if I’m inclined to pay $16 a month and change to receive it. I might, grudgingly, but I’ll probably just use the free-access option (i.e., up to 15 stories a month) and take my chances.

What would Mitt Romney say? “Let it die!” 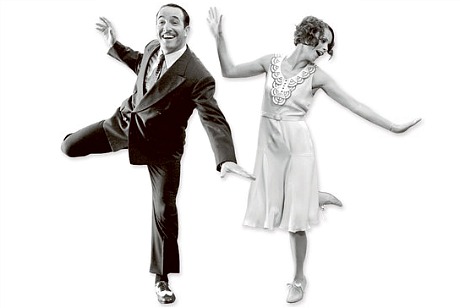 One is that title. If there’s anything that Harvey Weinstein‘s p.r. machine hasn’t been doing on behalf of The Artist, it’s tapping or tap-dancing. The Artist campaign hasn’t been a dance — it’s been a Third Army blitzkrieg. And if she’s talking about tapping on a door (“hello?…may we come in and collect our Oscars?”), the Weinsteins haven’t been doing that either. Nor have they been knocking or rapping or pounding on that door. The best analogy I can think of is that the Weinsteiners came along with some ace carpenters and removed the door jam and unscrewed the hinges and walked right in and did their usual-usual, which is winning Oscars by hook or crook. Which is fine. I’m only saying that winners never knock on doors or wait in lines. Nor do they never talk about their “best.”

Two, Ryzik says The Artist “has had awards buzz since its premiere at the Cannes Film Festival in May.” Okay, there was a bit back then. It began more earnestly in little trickles at the start of the season (Telluride/Toronto) and didn’t build up steam in late October or November, even. Things didn’t kick in big-time until the New York Film Critics Circle gave it their Best Film prize — that, for people like me, was the decisive dagger thrust to the groin. But Cannes awards buzz was, in my view, negligible. I was at that first Grand Lumiere screening and the reactions I read and heard were along the lines of “splendid! charming! a delightful style experiment with heart! how cool to watch a silent film again!” and so on. (I myself called it “a very well-done curio…a highly diverting, sometimes stirring thing.”) But nobody mentioned Best Picture to me. If anyone had been glib or shallow enough to suggest such a scenario, the response would have been “sure, it’s very well-done and all, and I suppose it’s possible that with a weak field next fall it might winnow its way in as a Best Picture contender, depending on the breaks, but c’mon…it’s a cut-and-paste of A Star Is Born meets Singin’ in the Rain, and it clearly doesn’t have the internals to propel it into serious Best Picture conversation.” (My review also stated that it’s “not quite a full-bodied motion picture with its own voice and voltage — a film that stands on its own.”)

Three, Ryzik says that The Artist “would be the first (nearly) silent film to win an Oscar in more than 80 years.” It is also, nearly, the first mainstream silent feature to have been made in 80 years….if you toss Mel Brooks‘ in-and-out, all-but-forgotten Silent Movie into the dumpster.

I do think it’s commendable that the Weinsteiners have brought The Artist to nearly $30 million domestic, and that they might jack it up to $40 million or beyond before it’s over.

The strongest response I can muster is that this video, which uses the Kaltura player, was/is slow to activate. I don’t understand how or why any video clip could be sluggish in this day and age. This is not 2005.

Update: It’s being reported that Sacha Baron Cohen is now good to go with his red-carpet shenanigans to promote The Dictator.

As reported widely over the last 10 hours, Bill Maher announced last night during his CrazyStupidPolitics Yahoo concert that he’s donating $1 million to President Obama‘s SuperPAC, Priorities USA Action. I don’t know what Maher is worth or what the tax ramifications might be, but I’m guessing he’s flush but not stinking. So dropping a mill into Obama’s re-election coffers sounds like a substantial and ballsy thing from his perspective whereas, say, Steven Spielberg donating the same is just a roadside piss.

The San Jose concert ended with the donation announcement, which was intended to inspire other flush entertainment-industry lefties to followed suit. Maher’s two money quotes: (a) “Having a country governed by Barack Obama rather than any of the Republican candidates is worth a million dollars” and (b) “this is the wisest investment I think I could make.”