With N.Y. Times reporter Brooks Barnes having drawn an analogy between John Carter‘s box-office crash and the great financial Ishtar disaster of 1987 (i.e., “Ishtar Lands on Mars“) and journos tweeting about Ishtar over the last day or so, it bears repeating that the Great Ishtar Bluray Delay saga, which I reported about last April, is still unresolved. 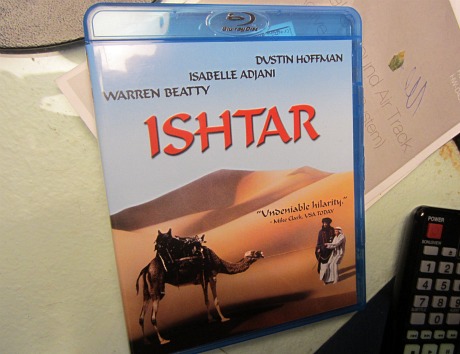 Most Los Angeles-based Sony Home Entertainment execs are away at an off-site meeting today, but Camilla Wilkinson, exec assistant to Sony Home Entertainment president David Bishop, has told me that the Ishtar Bluray is not currently on the SHE release schedule, which is firmed as far as May 2012 is concerned. So yes, a release could conceivably happen in the summer or fall of this year, but this has to be one of the strangest stalled-release situations in the history of the commercial Bluray market, absolutely and bar none.

Two weeks hence (Monday, 3.26) a Masters of Cinema Bluray of Pier Paolo Pasolini‘s The Gospel According to St. Matthew will be released. It’s my second favorite Jesus drama, the first being Martin Scorsese‘s The Last Temptation of Christ, which Criterion is releasing a Bluray of tomorrow. My admiration is about Pasolini’s refusal (or inability) to play the typical Jesus game. His film is dryer than Scorsese’s, but they’re both about shaking the tree to see what kind of odd fruit falls. 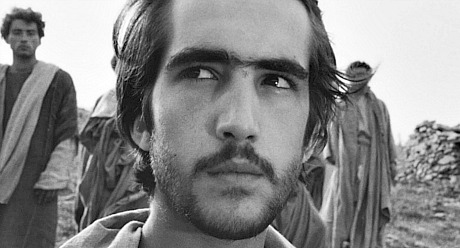 Enrique Irazoqui in Pier Paolo Pasolini’s The Gospel According to St. Matthew.

I’ve only seen Pasolini’s film once, but my recollection is that Enrique Irazoqui‘s Christ is the least tender and compassionate of all the Nazarenes in all the Jesus films. Pasolini took the dialogue straight from St. Matthew, but somehow I remember Irazoqui speaking to his costars in a very straightforward manner, like a mathematics teacher instructing students, and being rather stern and blunt about it. He seemed to always be saying “I don’t want to hear any more of your bullshit, and I’m sure as shit not here to add to the bullshit…I am what I am and the truth is the truth, and if I were you I’d listen up because I’m not here to fuck around.”

Remember when Last Temptation‘s Willem Dafoe tells Harvey Keitel that all the love stuff is yesterday’s news and that now he’s all about the axe? That’s what the Pasolini film is like all the way through.

You know what I’d like to see? A Jesus movie written by Quentin Tarantino. Seriously. It would be worth it just for the reactions it would stir from the Rick Santorum crowd.

Pasolini “employed some of the techniques of Italian neorealism in the making of his film,” says the Wiki page. “Most of the actors he hired were amateurs. Irazoqui was a 19-year-old economics student from Spain, and the rest of the cast were mainly locals from Barile, Matera and Massafra, where the film was shot.”

I was asked last week by Movieline‘s Stu Van Airsdale to come up with quite a few nominations for the 2011 Soily Awards…even though we’re smack in the middle of March 2012 with the Tribeca and Cannes film festivals not too far off. I told Stu I couldn’t go back to 20-effing-11 again and that I needed to be in the now. He said cool, and that I could always vote for the nominees when they break. I won’t post any further that that. Here’s Stu’s rundown.

I’ll post my yea and nays when he announces the winners of on Friday, 3.23. But I’ll tell you right now I’m not satisfied with the nominees for the Soily for Worst Picture of 2011 (i.e., “the most appalling, misconceived and/or unpleasant-to-watch film of 2011 — the more ambitious/pretentious, the better”).

Stu’s Soily panelists nominated the following: Abduction, Conan the Barbarian, Green Lantern, The Human Centipede II (Full Sequence) and Transformers: Dark of the Moon. I say no to just those. Your Highness has to be in there, and so do 30 Minutes or Less, I Melt With You, The Hangover Part 2, Sucker Punch, Pirates of the Caribbean: On Stranger Tides and Sherlock Holmes: A Game of Republican Shadows.

But seriously — Stu has to run his 2012 Soily piece in January of next year. Certainly no later than early February 2013. And then post the winners a week or so later. Nobody wants to take any more bites into 2011 right now.

Every now and then I’ll submit to a horror film, but only in theatres and never at home. But a couple of weeks ago I was sitting solo at home and happened to watch Devil, a 2010 shortfaller that was written by M. Night Shyamalan. And I began to feel creeped out. Okay, scared. I started imagining what kind of fiendish predator might be lurking outside my front door or peeking through my window.

I didn’t think I was susceptible to this kind of primitive stuff, but I was. I am. I don’t think I’ll be watching another horror flick in my living room any time soon. Give me the comfort of watching my next horror film while sitting near a family of noisy, farting, coke-slurping Jersey Shore types inside a Weehawken plex. Actually, I remember being a bit scared by Paranormal Activity 2 when I saw at at the Regal Union Square, although not in a way I couldn’t handle.

The odd thing was that Devil isn’t that good a film. It’s just all right — roughly a 7.5 on the meter. But something about a demonic figure hiding inside a mortal inside an elevator and knowing that the big reveal will happen in Act Three…somehow this shit got to me. In somewhat the same way that an old Kim Novak TV film called Satan’s Triangle gave me the willies.

This despite a dopey payoff in Devil in which Satan is revealed to be a kind of moral prosecutor, sentencing mortals to eternal damnation for having done a really bad thing or two. C’mon…that’s not the devil. He doesn’t flash his crazy eyeballs and send you to hell like Robert DeNiro did to Mickey Rourke in Angel Heart. Even though, yes, this is the kind of devil that tends to get to you when it’s just you and your cats.

I prefer the company of a comme ci comme ca Satan, a “have a drink and don’t worry about it” kind of guy who can’t stand the priggish sanctimony of a judgmental God and Christian theology in general. He’s Al Pacino in Devil’s Advocate or…whomever, Mick Jagger‘s Lucifer in “Sympathy for the Devil.” A guy who’s primarily about logic and excuses and slacking off and working the angles and lines of cocaine in Cozumel. You know…Bill Hurt in Broadcast News.

Deadline‘s Michael Fleming is reporting that Sony Pictures and producer Scott Rudin have nabbed remake rights to Katie Dellamaggiore‘s Brooklyn Castle, an inner-city social uplift doc (i.e., Undefeated meets chess excellence and budget cuts) that premiered yesterday at South by Southwest. The idea is to remake it as a feature with doses of grit, hardship and inspirational feel-good.

This will be Rudin’s second chess-themed film, the first being 1993’s Waiting for Bobby Fischer, which Steve Zallian wrote and directed.

The remake deal was orchestrated by Cinetic Media’s John Sloss.

Dellamaggiore’s doc is about I.S. 318, an inner-city school “where more than 65 percent of students are from homes with incomes below the federal poverty level.” (It’s located at 101 Walton Street, which is just a bit south of the Lorimer stop on the L line — not exactly a bombed-out area.) The twist is that I.S. 138 “has the winning-est junior high school chess team in the country.” And yet public school budget cuts have put the chess program and its accomplishments in jeopardy.

Two Prometheus trailers have dropped so far — the first on 12.22, the second on 2.16 — and how they’re showing us a new teaser for a full-boat trailer that’ll drop on Saturday, 3.17 at 4 pm Pacific? I hate these extended dingle-dangles. I can’t be the only one who’s having this reaction.

I’ve never cared for the tendency of big-budget action film producers to hire interesting European actors who’ve recently become iconic figures among Joe Popcorn types to play a villain. Javier Bardem is an exceptionally charming and gentle fellow who thinks like a poet, but that cuts no ice here. Skyfall director Sam Mendes and 007 producers Michael G. Wilson and Barbara Broccoli are apparently thinking as follows: (a) Bardem won an Oscar for playing a creepy maniac in No Country for Old Men so (b) “we want some of that too!” 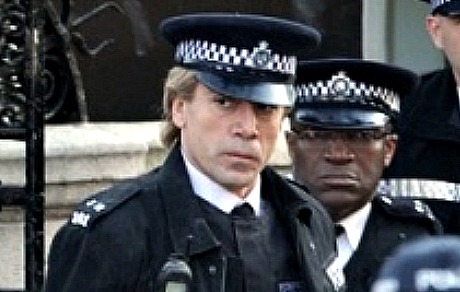 I’m sure Javier appreciates the paycheck, and I suppose one could do worse if you’re casting a 007 villain, but there’s nothing for baddies to do in these films except exhibit a certain perverse flair. There’s nowhere else to go. Bardem is playing more or less the same guy that Gert Frobe and Christopher Walken and Joseph Wiseman and Klaus Maria Brandauer and Christopher Lee and Yaphet Kotto played in their respective outings. It’s a box, a prison.

On top of which I’ve been nursing a dislike for Wilson-Broccoli for almost 20 years now. Wilson-Broccoli are two of the biggest lame-os who ever inherited a janitorial foothold in the action film racket. Trust me — I’ve heard stories about them from more than a few formidables. They’re caretakers.

To judge by this recently-captured photo from the set of Skyfall, the latest James Bond thriller starring Daniel Craig, Bardem has been working out and cutting out the carbs and the drinking, and is obviously adorned with blonde-ish hair (i.e., 007-ese for malevolent). Bardem was performing in a recently shot Skyfall scene in which his character, Silva, impersonates a London policeman. Who gives a shit about any of this? And yet here I am writing about it.

Skyfall will open on 10.26.12. The screenplay is by John Logan, Neal Purvis and Robert Wade. The great Roger Deakins is shooting it. I’m sure Mendes will make excellent use of his talents.

The Wikipage synopsis: “James Bond’s loyalty to M (Judi Dench) is challenged over secrets from her past. When MI6 is attacked, it falls to Bond to seek out and eliminate the threat regardless of the cost to himself.” I’ve read that Dench buys the farm.