A typical grain-monk sentiment is in this review of Universal Home Video’s Buck Privates Bluray, courtesy of Bluray.com’s Jeffrey Kaufman: “Is there DNR? Yes. Is it horrible? [That] depends on one’s tolerance for a digitally scrubbed image. There’s still grain in this presentation, but it has been diminished. The noise reduction is not as dramatic as in many Universal catalog releases, and the studio seems to be gaining cognizance (albeit too slowly for some) of how their efforts are being greeted by potential consumers.” 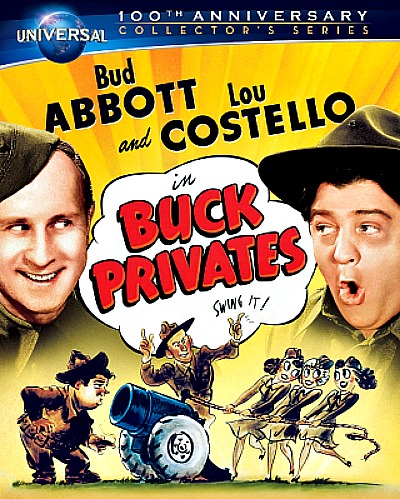 I love Universal’s Psycho Bluray, which has certainly been been DNR’d. It’s one of the most soothingly beautiful black-and-white Blurays I’ve ever owned, and it ticks me off knowing that if monks like Kaufman had their way it would be covered in grain. (On the other hand I would like to see a truer Bluray representation of the real Spartacus.) If loving that Psycho Bluray is wrong, I don’t want to be right. The grain-monk community is a very small clique of elite snobs who are so caught up in grain savoring that they can’t see the forest for the trees. “The people” (i.e., peons like myself) like a good sharp image, period. I personally can’t wait to take a bath in the DNRing of Buck Privates.

Sooner or later the Greta Gerwig relationship movie will happen. As good as Greenberg only better. A voice is telling me this probably won’t be it, but sooner or later it’ll come to pass. I hope. Maybe. 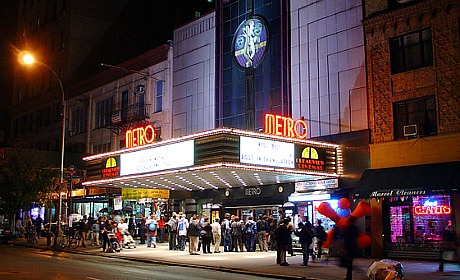 It was reported today that the MPAA has given Lee Hirsch‘s Bully a PG-13 rating after all. The decision was ratified after three f-bombs that nobody remembered hearing in the first place were removed from the soundtrack. The MPAA is also easing up on its 90-day rating change rule, permitting Bully to open in 55 territories on 4.13 with the PG-13 rating. Can we agree at this point to never discuss Bully‘s MPAA rating ever again?

If I was Jim Cameron I would move mountains in order to direct a nice, modest, middle-range relationship movie. Or a nice, midsized American political drama. Or anything at all in the middle range. I’d want the world to know that my films don’t have to be big or super-expensive or push the technological envelope. Most of what constitutes “human drama” happens in the modest middle regions, and I wouldn’t want to go through life suggesting that I don’t get that.

I suggested this notion to Cameron in late ’97 from the offices of People, when we did a Titanic phoner. I may have actually said “you should do a My Dinner With Andre-type thing, just to fuck with people’s heads”…or words to that effect.

I haven’t put enough effort into developing relationships with reliable tecchies who can help with issues like data migration. HE’s regular tech guy has been otherwise engaged so over the last four weeks I’ve hired two freelance guys to migrate Hollywood Elsewhere from Movable Type to WordPress, and they’ve both failed miserably. The first turned out to be a psychotic flake, and the second guy — a resident of Dana Point and an HE reader for the last two or three years — turned out to be comically unreliable and also a loon.

Two weeks ago he disappeared without a peep due to a three-day bout of meningitis in the hospital. (Or so he said.) I’d been feeling worried again because I hadn’t been able to reach him for the last two days. Last night his mother called and confessed that last Monday he was arrested for driving with a suspended license, and is now in jail in Santa Ana, awaiting a 4.17 court hearing.

I work hard, don’t drink, love my cats and this my life? I’m dealing with a guy who can’t complete a freelance job because the cops have come to his home and cuffed him and put him behind effing bars? This is what happens when you improvise and decided to trust intelligent-sounding people who seem smart and reasonable over the phone.

Anyone who drives with a suspended license poses a serious threat to the safety of any community so unless somebody posts bail ($17,500) the authorities won’t let this guy out for another two weeks, give or take. So now I have to find a third person to take over and finish the job. I’ve re-appealed to HE’s technical consultant plus another person I know. The Santa Ana jail guy had allegedly moved the migration along to a fairly advanced stage, or so he claimed last weekend. What a calamity this whole effort has been.

Mouse, my obese, four year-old Siamese male, goes out every night from 9 or 10 pm until crash time around midnight or so. I clap and he comes running from the shadows. Last night around 12:45 am I heard him yowling in that distress-call sort of way that cats use when they’re scared. He’d gotten himself trapped inside the outdoor backyard area of Le Pain Quotidien, which is right next door. There’s a big gate that the employees close and lock when they go home, and Mouse was on the wrong side of it. 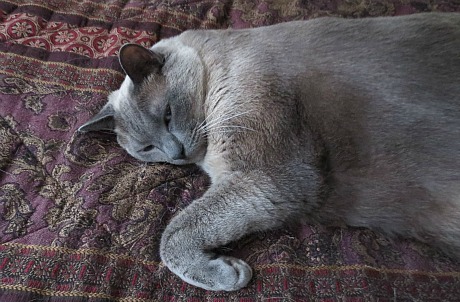 I went outside and told Mouse to hang on. The gate has five or six inches of free space so I called him over to see if he could slide under, or could be pulled under. But Mouse was too fat. I was about to haul myself over the gate, which is about eight or nine feet tall, and go through the whole strained-exertion, T-shirt-ripping, pulling-a-ligament routine. Then I suddenly said “eff it” and called the West Hollywood fire station. They asked for details and said to hang tight. They showed up ten or twelve minutes later — four guys in their late 20s to mid 30s. No fire hats but rubber boots and T-shirts and overalls and all the rest of the unifirm.

One of the guys leaned over an adjoining wall and used a long wooden pole to open the two or three metal slide bolts on the gate, and the gate swung open. Mouse and I were relieved and very grateful.

Thanks to the good firemen of West Hollywood, and no, I didn’t buy them a 36″ pizza or a 24-pack of beer. That would be patronizing. That would be me saying “you guys are a team of really nice, good-hearted, blue-collar schlubs in the Denis Leary mold, and I appreciate what you did.” This is West Hollywood. There’s a decent chance that one or two of the guys who visited last night were gay and perhaps more health-conscious than your average Rescue Me-type firefighter, and therefore don’t drink beer or eat pizza or watch ESPN. Maybe I’ll bring them a plant or something. I need to give this some thought.

Yesterday Variety‘s Jeff Sneider reported that Liam “Paycheck” Neeson, currently bearding it up in Wrath of the Titans, will play “a worn-out air marshal who faces a threat while traveling on an international flight” in a Joel Silver film called Shiny Brown Torpedoes Falling From 35,000 Feet. Oh, wait, sorry, that’s wrong — it’s going to be called Non-Stop.

What’s the difference between Neeson and other action-genre clockpunching shlubs like Jason Statham? Neeson seems to occasionally attract slightly better material, as evidenced by The Grey. Otherwise he’s the very definition of an interesting, struggling middle-aged actor with a touch of the poet who decided three or four years ago to totally drop trou as long as they meet his quote.