Because last fall’s New York Film Festival Lincoln Center showing of the restored Ben-Hur was such a bust, I decided to check out last night’s screening of this 1959 classic at the American Cinematheque. It looked pretty good and for the first time in my life, I saw the 2.76 to 1 aspect ratio on a large scale. But the center dialogue track was on the weak side — you had to cup your ears to clearly hear every word. There’s always something not quite right or good enough.

But honestly? I didn’t want to go to the Cinematheque at all because of the film bums who always show up at these screenings. The late Stuart Byron coined this term in the late ’70s or early ’80s, and I think we all know what it means. It means older film obsessives who always look a little saggy, beefy and tattered. Paunchy, T-shirty, easy-fit jeans, sandals with socks, jowly, unkempt. They never attend with women because they don’t have girlfriends — they never do. I’m sorry but it creeps me out to sit in their vicinity. Slightly. I walk into a theatre and see them sitting there and I think to myself, “Oh, Jesus…I can’t be near these guys.”

I would feel differently if they attended with ladies or with a small group or with male friends, even, and if they dressed more uptown (sport jackets, leather jackets, freshly-pressed slacks or 514s or anything with a little style, flamboyant socks, quality leather lace-up shoes). Or…you know, if they just suggested in any way that they have a life. 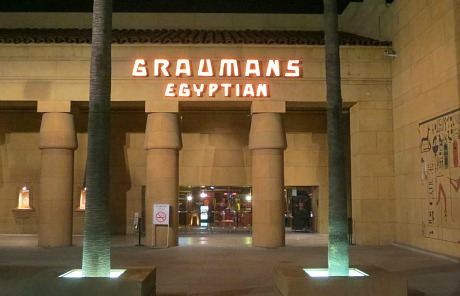 From Facebook page of Washington, D.C.-residing, Truman and Eisenhower-era comic book & illustration collector Ron Evry (“Mr. Ron’s Basement”). All genuinely creative people (like me) are either penny-pinching or indifferent to luxury-laden lifestyles, or at least until they get corrupted. But they always buy quality. A voice is telling me that Clift’s 1940 vehicle was a Hupmobile. 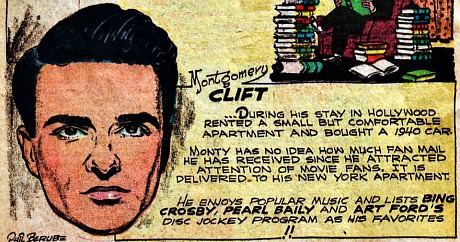 10 Comments
All Hung Up

But the film has a small but significant elephant in the room. Other critics don’t seem to give a damn, but it’s a problem. For me anyway.

This film is about healing from guilt, trauma and death. Lazhar, a newly arrived Algerian teacher at a French elementary school, is recovering from his wife’s passing. And the kids in his class are reeling from the suicide of their teacher, a youngish woman who — get this — hanged herself in the classroom where she taught them. For all the students to see and freak out over. What kind of a person would do such a thing? Any teacher would know that committing suicide at home or somewhere off the school grounds would be ghastly enough for the students. But hanging yourself in a classroom?

Plus I found it completely bizarre that no one in the entire film so much as mentions what a malignant act this was. All they say is “poor sad teacher,” etc. I couldn’t get past this and felt certain distance from the film…sorry.

I talked about it with Falardeau last week on the phone. His screenplay is an adaptation of Evelyne de la Cheneliere‘s play, and he wondered about the hanging aspect, he said, but felt more or less roped into it. I asked him what kind of teacher would not only kill herself but do so in a way that would emotionally scar her students for life? When depressed people are approaching the act of killing themselves they’re swimming in a kind of insanity pool, he said, and they don’t really have their bearings. I don’t buy that. A suicidal teacher could be completely upside down with grief but she’d at least have the decency to kill herself in a way that would lessen the impact among her students — and not intensify it.

I didn’t laugh at last night’s “Bein’ Quirky” SNL skit, but I didn’t mind it. It made me smile a bit. That’s almost like saying I laughed. Sofia Vergara‘s Fran Drescher, Abby Elliott‘s Zoey Deschanel, Kristen Wiig‘s “talking out of the right side of her mouth” Drew Barrymore, and Taran Killam‘s Michael Cera. Wiig and Killam were my faves.

The Three Stooges began to come back, I believe, when Mel Gibson did a little Stooge routine at the start of a drug bust in Lethal Weapon. That was 25 years ago, and now, after relentless delays, the Farrelly brothers’ film version is opening in 4.13. 20th Century Fox publicists have been slow with the screening invites. They showed it yesterday afternoon at the Chinese to a family crowd. This morning I asked if I could please attend the Tuesday all-media, and they said okay.

From Dennis Lim‘s 4.6 N.Y. Times article: “The Farrellys agreed that it made commercial sense to modernize — no pie fights, for one thing — but Peter Farrelly said that to a large extent they strove for absolute fidelity to the original: “They had to look the same, sound the same, talk the same, dress the same.” Die-hards, they realized, would not tolerate deviation when it came to characters who had hardened into legend: Moe, the impotent leader with his mood swings and undercurrent of simmering rage; Larry, with his goggle eyes and frizzy mop of yankable hair; Curly with his trilling falsetto and subverbal yelps and nyuk-nyuks.

“The Farrellys also painstakingly preserved the famous sound effects: the boinks and thumps of all those head smacks and eye pokes and sledgehammers to the skull.”

On this, a morning of Christian celebration of the resurrection of Jesus Christ (and of palm fronds and chocolate Easter bunnies), I’m watching Meet The Press host David Gregory talk with guests about how religion can (or could) affect culture, politics and national policies. And I’m looking at his guest Gigi Graham, the daughter of rightwing Christian bigot and hate-monger Billy Graham, and thinking about my feelings of loathing for the Christian right and my split feelings about religion — it gets the weak and vulnerable through the night and keeps the sheep in line, but it also provides a haven for the smallest and pettiest minds. Rightwing Christians and Islamic fundamentalists are equally vile, but I hate Christians a little bit more because I grew up with them and have come to know their shallowness and complacency first-hand.

The legendary 60 Minutes interrogator Mike Wallace has died. A month shy of his 94th birthday, Wallace slipped into the after-realm “at a care facility in New Haven, where he had lived in recent years,” according to Tim Weiner‘s N.Y. Times obit. I flinched when I read that. The fearless Mike Wallace in an assisted living or medical care facility! What a ghastly, loathsome concept. 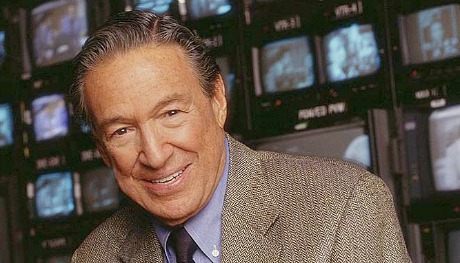 I talked to Wallace and his wife Mary a little more than five years ago at a Peggy Siegal party at MOMA. He was the youngest and healthiest looking and most intellectually alert 88 year-old I’d ever spoken to, and probably will ever speak to.

What did I say to Wallace? That being played by Christopher Plummer in Michael Mann‘s The Insider was one of the luckiest, most positive, image-enhancing things that could have happened to him. He’s portrayed as a charismatic guy who was flinty, tough and powerful, and then (a) made a mistake by kowtowing to CBS lawyers and corporate interests, (b) offered a memorable rationalization (“I don’t plan to spend the end of my days wandering in the wilderness of National Public Radio!”), (c) recognized his mistake, (d) revealed his remorse and feelings of vulnerability to Al Pacino‘s Lowell Bergman, (e) tore Gina Gershon‘s attorney character a new one (“What are you gonna do now? You gonna finesse me? Lawyer me some more? I’ve been in this profession fifty fucking years! You and the people you work for are destroying the most-respected, the highest-rated, the most-profitable show on this network!) and (f) set things right.

Plummer-as-Wallace had one other great line: “Fame has a half-life of 15 minutes. Infamy lasts a bit longer.”

I also asked Wallace what his regimen was — what he ate and didn’t eat, how much exercise, how much sleep he got, how much walking, how much reading, writing, TV time, online time…the whole rundown. Because I want to look as good when I get older. It was mostly a bullshit question since good health and a vibrant appearance are almost entirely about genetics, but I was genuinely impressed.

This was a guy who used to smoke like a chimney and did cigarette advertisements for Phillip Morris and Parliament in the 1950s and early ’60s.

Wallace’s journalistic reputation was that of an engaging and tenacious prick, “the Terrible Torquemada of the TV Inquisition.” I love this passage in Weiner’s obit: “As he grilled his subjects, he said, he walked ‘a fine line between sadism and intellectual curiosity.’ His success often lay in the questions he hurled, not the answers he received. ‘Forgive me’ was a favorite Wallace phrase, the caress before the garrote. ‘As soon as you hear that,” he told The Times, “you realize the nasty question’s about to come.'”

Nine weeks ago Plummer told Pete Hammond during a Santa Barbara Film Festival chat that Wallace “was a cruel guy but a great TV newsman.”

Wallace didn’t really come into himself and begin to mine his Mike Wallace-ness until the mid to late ’50s, when he was pushing 40. His hottest career phase happened with 60 Minutes, of course, which began in 1968 when he was 50.

Wallace’s Wiki page says he “was hospitalized [in the early ’80s] with what was diagnosed as exhaustion. But his wife, Mary, forced him to go to a doctor, who diagnosed Wallace with clinical depression. He was prescribed an antidepressant and underwent psychotherapy. Out of a belief that it would be perceived as a weakness, Wallace kept his depression a secret until he revealed it in an interview with Bob Costas. In a later interview with colleague Morley Safer, he revealed he attempted suicide circa 1986.”

Here’s an interview he did with Kirk Douglas in 1957, when Douglas had just finished shooting Stanley Kubrick‘s Paths of Glory.

“If you want mind-blowing,” I wrote at the time, “consider this quote from Wallace’s introduction: ‘Just the day before our interview, Mr. Douglas had completed shooting on The Vikings for which he had grown his hair long and he hadn’t yet had the chance to see his barber.” In other words Wallace is not only mindful of the regimented, bordering-on-military approach to men’s hair styles in 1957, but feels a need to actually prepare the audience for the shock of seeing Douglas’s coif, which is maybe a tiny bit longer and fuller than an average haircut worn by a typical Man in a Gray Flannel Suit. Lockstep conformity was the rule among urban male professionals of the ’50s, but Wallace’s remark borders on the absurd.”