I paid $15 or $16 bucks to see The Three Stooges tonight at the ArcLight, and it was well spent. I just emailed this to a critic friend who’d urged me to see it: “Wow, you’re right — it’s surprisingly good! The Farrelly’s really delivered. They’ve captured & re-bottled that old-time Stooges spirit and gotten it right. I actually laughed several times and I’m not what you would call a hah-hah type of guy. Plus those Jersey Shore and Kardashian and fart jokes. All three Stooge impersonator-stars — Chris Diamantopoulos (Moe), Sean Hayes (Larry) and especially Will Sasso (Curly) — nailed it. And Larry David! The whole cast & crew were on the same mescaline when they made it. It’s got that jack-in-the-box foolery & that vaudeville timing & those old reliable foley gags. Not a gem or a classic exactly, but the Farrelly’s knew exactly what to do.” 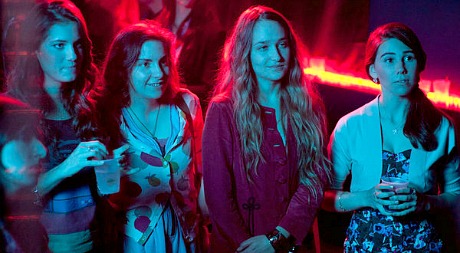 Dunham’s Hannah “is not a heroine fit for network television. She is plain, unshapely and unpleasant in ways that are only occasionally endearing. She’s a parasite sponging off her parents and a forgetful and sometimes unreliable friend. Her liaison with Adam (Adam Driver), an out-of-work actor, is debasing.

Indiewire‘s Amy Taubin describes Hannah as “a stubborn, petulant, occasionally outraged cherub and a short-waisted, pear-shaped body that makes her desperately unhappy even as she dares us to notice that she isn’t as tall and slim as her best friends, and who is also disgustingly self-involved, lazy, limited in her world-view to the degree that she has one, and forever flinging herself at a guy who uses her like a blow-up sex doll with a bothersome voice mechanism that’s been programmed to say all the wrong things.”

And this: “Modestly entertaining in its defiant immodesty, Girls nails the way that women — make that ‘girls,’ no, make that white, upper-middle class, well-educated, and, as far as they know, heterosexual persons with vaginas — talk about sex. The show does that one thing better than any commercial series television has, including its obvious model, Sex and the City.”

I’d have some comments of my own, but I’ve been. like, too frazzled and disorganized and distracted by Bluray glitches and aspect ratios and everything else to obtain a screener so I’ll just watch along with everyone else on Sunday.

Dark Knight Rises director Chris Nolan has spoken dismissively of 3D before, but it can’t hurt to reiterate…what the hell. DGA Quarterly‘s Jeffrey Ressner did the asking, transcribing and composing.

“3D is a misnomer,” Nolan says. “Films are 3D. The whole point of photography is that it’s three-dimensional. The thing with stereoscopic imaging is it gives each audience member an individual perspective. It’s well suited to video games and other immersive technologies, but if you’re looking for an audience experience, stereoscopic is hard to embrace. I prefer the big canvas, looking up at an enormous screen and at an image that feels larger than life. When you treat that stereoscopically, and we’ve tried a lot of tests, you shrink the size so the image becomes a much smaller window in front of you. So the effect of it, and the relationship of the image to the audience, has to be very carefully considered. And I feel that in the initial wave to embrace it, that wasn’t considered in the slightest.”

I respected Cabin In The Woods but I felt poisoned and sickened all the same. An instinct told me to miss Life Happens, and now it’s open with a 32% Rotten Tomatoes rating. I was too lazy or disorganized to see Lockout, but no worries — it’s also rated poorly. I liked Monsieur Lazhar but I had a problem with a teacher hanging herself in a classroom. I didn’t get to last Tuesday’s Three Stooges screening…no excuse. But a 42% RT rating = meh. 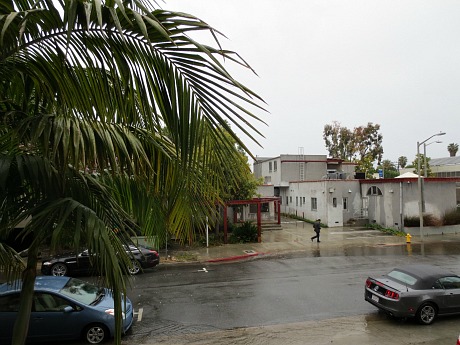 So Lazhar is the best bet among the newbies, but I’ll be going to that DCP TCM Classic Film Festival screening of Vertigo at the big Chinese, and we’ll see about that 1.85 vs.1.66 thing once and for all. I like getting out in the rain and feeling cold and challenged. It reminds me of back east.

This thing wears out its welcome. At the 1:30 mark I started to feel antsy. At the 2:00 mark I said to myself, “I can’t believe this goes on for another two minutes and 34 seconds.”

For what it’s worth I’d love to see you direct Catching Fire because you’ll class it up and put Gary Ross‘s work on The Hunger Games to shame. Suzanne Collins‘ material is so far below your default aesthetic level that it’s not funny, but it’s considered healthy, by industry standards, to take a paycheck job every now and then. Like when Alfonso Cuaron took the Harry Potter/Prisoner of Azkaban gig, which did him no harm.

Is there any hint as to whether you’re really in the loop for this, or are they leaning more toward Alfonso or Cronenberg? Can you tell me anything at all?”

The ongoing media feud between Mel Gibson vs. Joe Eszterhas over the Maccabee project (a “Jewish Braveheart“) has, of course, revived recollections of Gibson’s temperament and, to hear it from Eszterhas, “vile” behavior. This ugly episode will almost certainly lessen interest in Gibson’s Get The Gringo, which is being given an exclusive 5.1 DirectTV debut via Fox Home Entertainment with a DVD/Bluray to follow.

I noticed last night that the projected aspect ratio of Cabaret at the big Chinese theatre was 1.66 to 1 — no question about it. And I was thinking to myself, “Great — I can use this to bash the 1.85 fascists.” But after the screening I saw Warner Home Video’s Ned Price, who will be marketing the Cabaret Bluray when it comes out, and he said the aspect ratio we’d just seen was 1.85. Flummoxed, I contacted the Chinese projectionist and he also said it had been shown at 1.85 via a DCP.

I’m going back to the Chinese tonight and will somehow take snaps of the screen (even though that’s a huge general no-no) during the DCP showing of Vertigo, and then I’ll post the proof. That or I’ll get busted trying and thrown out of the theatre by the TCM goons (whom I wrote about last night).

Or should I just drop it?

The writers stuck in a little “uhm…let’s not think too hard about what gay guys do with each other in the privacy of their own homes” schtick to make the spot sound like less of a harangue…mildly funny.