I feel conflicted myself about the battle of the killing-Osama movies — John Stockwell‘s Code Name Geronimo, which the Weinstein Co. is apparently intending to distribute come September or October, and Kathryn Bigelow and Mark Boal‘s Zero Dark Thirty, which Sony will release in December.

I’m naturally expecting the Biggy-Boal to be the definitive version, given my expectation of Hurt Locker-ish chops (i.e., Anxiety City, you-are-there verismilitude) and Boal’s years-long investigation into the Bin Laden hunt. But I’ve been rooting for the talented Stockwell (crazy/beautiful) to climb out of the escapist youth-flick hole that he fell into after directing the very fine Blue Crush.

Zeitchik reports that Code Name Geronimo is being produced by Voltage Pictures, whose chief Nicholas Chartier won an Oscar as one of the Hurt Locker producers but who was barred from the ceremony because of somewhat icky campaign tactics.

He also reminds that Zero Dark Thirty is being produced by Megan Ellison, who is also affiliated with the Weinstein Co’s Killing Them Softly, The Master and Lawless, which will also be released this fall.

Criterion is obviously planning on bringing out a Bluray of On The Waterfront. If they follow the lead of guys like Bob Furmanek and issue this classic film, which has been exclusively seen for the last 55-plus years in a 1.33 or 1.37 to 1 aspect ratio…if Criterion issues Eliza Kazan‘s 1954 classic within a 1.85 to 1 aspect ratio, as Furmanek The Terrible claims it should be, then they will have blackened their name in the annals of Hollywood lore, and there can be no forgiveness. This will be, trust me, The Mother of All Aspect Ratio Battles.

Earlier today I caught two market screenings — Ursula Meier‘s Sister at 2 pm, and then Klaartje Quirijns‘ Anton Corbijn Inside Out. Both are modestly respectable. No, make that just plain respectable and in some ways exceptional, but I haven’t the energy to write about them. It’s 8 pm and I’m been up and at it since 6:30 am. The engine shuts itself off after 13 or 14 hours.

Every year I run these same slow-pan videos from the same vantage point so I thought I’d get them out of the way early. In several ways these aren’t exactly the same — things have changed, people are older, perspectives have altered, the films are obviously new, etc. So there’s a certain amount of freshness here.

I’m afraid that Ulrich Seidl‘s Paradise: Love, which may well be an excellent film, is going to have to make its way through the festival without my assistance or participation. I decided against seeing it five seconds after opening the press book and realizing it’s about a 50-ish fat lady going to Kenya to have it off with the native lads. 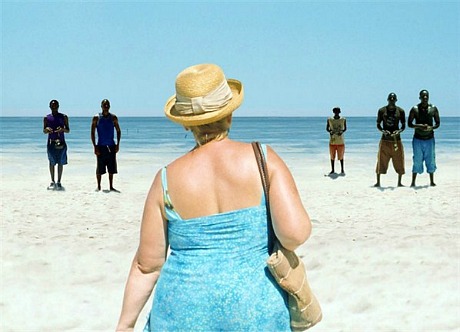 For all I know it’s about a romantic and spiritual journey that will rival Katherine Hepburn‘s in Summertime, but I wouldn’t see this with a knife at my back. Best wishes to Seidl and his collaborators.

Oh, and at the risk of offending the transgender community, Xavier Dolan‘s Lawrence Anyways is out too. I didn’t much care for Dolan’s Heartbeats, a menage a trois film from two or three years ago, and I just don’t feel like doing this and it’s my right as a citizen to say “no” so let’s just leave it alone…no offense but later. If I was forced to choose between the two I’d probably go for the Dolan, for what it’s worth. 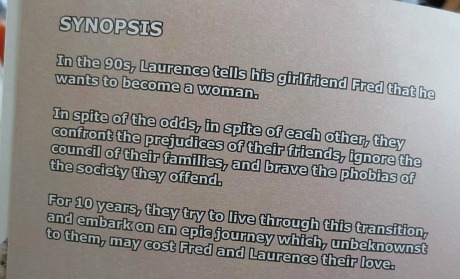 The first Twitter reactions following this morning’s 8:30 am screening of Jacques Audiard‘s Rust and Bone were a bit excitable, but calmer voices soon prevailed and now, eight hours after the screening broke, the consensus is set in cement: it’s a fairly good to good to very good film, but Marion Cotillard has the Palme d’Or heat.

Jeff Nichols‘ Mud, which will have its second market screening tomorrow (and to which press persons are excluded), “draws you in almost immediately with the atmospheric landscapes,” says a guy who saw it yesterday afternoon at the Oympia. “It begins with Ellis (Tye Sheridan) and Neckbone (Jacob Lofland), both 14, heading out on the river to an island where a flood has lodged a boat in a tree. They decide to take it until Mud (Matthew McConaughey), a drifter on the run from the law, shows up and claims it as his own.”

And then he proceeds to recount the whole plot so let’s stop here. But “it’s very much a character-rich drama,” he says. “A coming-of-age story for Ellis and redemption story for McConaughey’s. Nichols’ draws you in with the character development. I was immersed in the performances, particularly McConaguhey’s.” The guy didn’t mention Reese Witherspoon‘s work, but his synopsis suggests that her character, Juniper, is flawed and somewhat trashy, which is a welcome change of pace for Ms. Goody Two-Shoes.

I got up early, did a little work and made the 8:30 am screening of Jacques Audiard‘s Rust and Bone, a rooted, intriguing and obviously well made film..but no “masterpiece,” which is what one American visitor has called it. It’s about detachment, emotional and otherwise. And breaking through and growth and all the usual struggling-with-the-bad-stuff stuff. It’s fine and steady and laudable, but let’s not get carried away.

Critics come loaded to these screenings, looking for a good wave like surfers. Hungry to be carried aloft and feel that ecstasy. And when a film is somewhere between good and quite good (i.e., Rust and Bone), some go “oh my God, I’ve just caught some kind of Hawaiian wave of a lifetime!” Calm down. Get some perspective.

The best thing about “the Audiard” is Marion Cotillard‘s performance (a probable Palme d’Or Best Actress contender) as a woman who’s lost her legs. But the truly handicapped figure is Matthias Schoenfaert‘s Ali, a mild-mannered brute who puts a comme ci comme ca face on his “I’m okay, whatever, leave me alone, don’t touch” selfishness.

Yes, the brawny, Schwarzenegger-like Schoenfaert is playing another ox (a cousin of his deballed Bullhead character), and words fail to describe what a boring drag he can be to hang with at times. So there’s that to contend with. But Audiard is such a skilled and honest filmmaker that most of it comes out right, more or less.

I tweeted this about 90 minutes ago: “The story just meanders along, intriguingly and with metaphorical layers and whatnot, but the voltage meter is set to ‘medium’ throughout.” And then Mike D’Angelo tweeted that it’s “the story of a horribly disabled person, and also of a woman with no legs. Stealthy reverse schematism!” To which I replied, “Yes, Schoenaerts’ character is more disabled than Cotillard’s. Obviously. He’s the one who needs to come together. And…?”

Cotillard is so utterly readable in every scene, every moment…but without any apparent effort. Naturalistic acting at its very finest. There’s so much in her eyes and her mouth. I could just stare at her, endlessly.

There’s other sutff to type but I have a 2 pm screening of Sister to try and crash at a market screening. Later…