64 Comments
Do The Math

During this afternoon’s Django Unchanged panel at Comic-Con, Quentin Tarantino explained what Empire‘s James White calls an “intriguing link” between Jamie Foxx‘s Django and ’70s blaxploitation cinema. According to QT, Broomhilda Von Shaft (Kerry Washington) and Django “will eventually have a baby, and that baby will have a baby…and then John Shaft will be born! Our hero and heroine are the Great, Great, Great Grandparents of Shaft.”

Here’s a portion of a Michael Keaton q & a on Grantland, filed by Daniel Kellison: 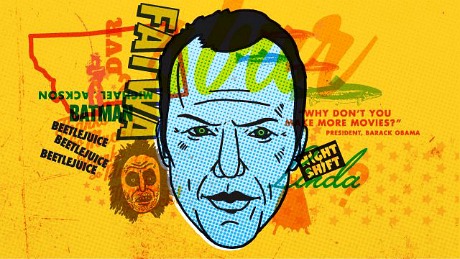 According to a 7.10 posting by terrencemalick.org’s Paul Maher. Jr., Terrence Malick‘s To The Wonder — an Oklahoma-set romantic drama he shot in late 2010 with Ben Affleck, Rachel McAdams, Olga Kurylenko, Rachel Weisz, Jessica Chastain and Javier Bardem — has scared away distributors, who have presumedly been shown the film in its entirety or in portions.

In other words, the same buyers who were going “what the eff is this?” after seeing The Tree of Life are again throwing up their hands and muttering to themselves in the general vein of “here we go again,” “life is too short,” “Jesus H. Christ” and “not me, babe.”

As Maher puts it, “Possibly the difficulties of The Tree of Life and its polarizing effect on the box office may be an underlying issue.”

Maher’s source is either closely affiliated with or working for Film Nation, and of the female persuasion. I’m listening to Maher because he’s a Malick fan, and like any webmaster running a kiss-ass website his default tendency is to praise Malick and otherwise shine favorable lights upon his accomplishments.

Not only is To The Wonder not being released in this country any time soon (although it may open in Europe a few months hence), but “the possibility of any trailer or publicity-related material coming out in the fall of 2012 is still vague, possibly unlikely,” Maher writes. He also reports that “when asked for any kind of teaser image or information, I was told [by my FilmNation source] that there still is nothing in the public domain that they could release.”

What the eff does that mean?

Malick taking two years to cut a film together is SOP (Days of Heaven was in the editing room from ’76 to ’78) but he can’t be moved to even issue a selection of still images from To The Wonder? Or allow a one-sheet to be created? Or put together an appetite-whetting teaser of some kind?

I’ve been saying for years that Malick needs a tough ballsy producer who isn’t afraid to get in his face and read him the riot act and goad him into adhering to a semi-reasonable editing deadline (i.e., between a year and eighteen months, let’s say) and perhaps even influence the shaping of his films in a way that won’t flagrantly agitate the thick-fingered vulgarians in the distribution business, at least to the point that they’ll make semi-serious bids on his finished films, which has not apparently happened on To The Wonder, per Maher.

The fact that To The Wonder is allegedly homeless nearly two years after principal photography is the proof in the pudding. Terrence Malick needs an intervention. He needs a strong partner and counsel who can save him from himself.

More to the point, the indications are overwhelming that Sarah Green and Nick Gonda, Malick’s producers on (a) To The Wonder, (b) the film formerly known as Lawless and (c) Knight of Cups, do not believe in the tough-love approach used by Bert Schneider, Malick’s producer on Days of Heaven. Malick’s endless dithering and dilly-dallying indicates that Green and Gonda are not forcing the issue and have decided to serve him in a passive, whatever-Terry-wants sort of way. They appear to be hand-holders, friends, toadies, facilitators, go-alongers, enablers.

In a 5.18.12 interview with The Hollywood Reporter‘s Pamela McClintock, FilmNation’s Glen Basner said he “hit it off with Sarah Green and Nick Gonda, two of the producers of [To The Wonder]. We were very like-minded people and maintained a friendly relationship. They were looking to make his next movie more outside the system, allowing Terry to have a process that works best for him, and we devised a way to finance the movie that met all of those needs.”

In other words, Malick says “jump” and Green and Gonda say “how high?”

In a 12.13.11 obit, I praised Schneider as “the last producer to semi-successfully micro-manage Terrence Malick and keep him from his own self-indulgent tendencies by somehow persuading him to keep Days of Heaven down to a managable 94 minutes.

“After Heaven, Malick never made a lean, well-honed movie again. When he returned to filmmaking in the ’90s it was all pretty photography and leaves and alligators and voice-over and scrapping dialogue and expansive running times. Mister, we could use a man like Bert Schneider again.

“An avowed leftie, Schneider was a renowned, down-to-business producer of late 1960s and ’70s classics such as Easy Rider (which Schneider reportedly honed into shape when director Dennis Hopper‘s undisciplined editing became problematic), Five Easy Pieces and The Last Picture Show. He also won a Best Documentary Oscar in 1975 for Hearts and Minds.

From Wiki’s account of the post-production of Days of Heaven:

“After the production finished principal photography in ’76, the editing process took over two years to complete. Malick had a difficult time shaping the film and getting the pieces to go together. Schneider reportedly showed some footage to director Richard Brooks, who was considering Gere for a role in Looking for Mr. Goodbar.

“According to Schneider, the editing for Days of Heaven took so long that ‘Brooks cast Gere, shot, edited and released Looking for Mr. Goodbar while Malick was still editing.’

“A breakthrough came when Malick experimented with voice-overs from Linda Manz‘s character, similar to what he had done with Sissy Spacek in Badlands. According to editor Billy Weber, Malick jettisoned much of the film’s dialogue, replacing it with Manz’s voice-over, which served as an oblique commentary on the story.

“After a year, Malick had to call the actors to Los Angeles to shoot inserts of shots that were necessary but had not been filmed in Alberta. The finished film thus includes close-ups of Shephard that were shot under a freeway overpass. The underwater shot of Gere’s falling face down into the river was shot in a large aquarium in Sissy Spacek‘s living room.

“Meanwhile, Schneider was upset with Malick. He had confronted Malick numerous times about missed deadlines and broken promises. Due to further cost overruns, he had to ask Paramount for more money, which he preferred not to do.”

As I wrote on 6.29.11, “Terrence Malick’s 10.1.96 draft of The Thin Red Line was tight and true and straight to the point, and it had no alligators sinking into swamps or shots of tree branches or pretty leaves or that South Sea native AWOL section or any of that languid and meditative ‘why is there such strife in our hearts?’ stuff.” Why didn’t Malick shoot the down-to-it script he wrote? I wouldn’t know, but one reason, surely, is that his producers didn’t say boo when he decided to throw in the alligators and the tree leaves and all but jettison Adrien Brody‘s performance.

Terrence Malick, in short, has been enabled to death by his friends and supporters. He’s a fascinating, highly educated sea captain-auteur who has always followed his heart and has taken his three-masted schooner around the world to exotic and illuminating destinations, but he has almost always been impractical and unreasonable, and he’s been known to allow his canvas sails to become ripped and tattered. He’s almost like a kindly, gentle-mannered version of Captain Ahab — a man tasked with delivering oil to the people of New Bedford but who has other business to take care of. That “other business” has resulted in some great filmmaking, but Malick needs a strong Starbuck in his life.

How hard is it to sing on-key? For many people, it can’t be done. I’ve sat in restaurants and listened to people absolutely murder the “Happy Birthday” tune — and singing “Happy Birthday” is about as easy as it gets. It’s not just hitting notes — you also have to slide into them, sustain them. Wake me up at 4 in the morning and I’ll sing “Your Smiling Face” perfectly in terms of phrasing and hitting notes. Same thing with “Be-Bop Baby.”