“But here’s the difference between the rest of the world and us: We have two Auroras that take place every single day of every single year! At least 24 Americans every day (8 to 9,000 a year) are killed by people with guns — and that doesn’t count the ones accidentally killed by guns or who commit suicide with a gun. Count them and you can triple that number to over 25,000.

“That means the United States is responsible for over 80% of all the gun deaths in the 23 richest countries combined. Considering that the people of those countries, as human beings, are no better or worse than any of us, well, then, why us?” — Michael Moore speaking tonight on Piers Morgan’s CNN show.

During my lost and floundering period in the mid ’70s I worked for a New Canaan landscaper named John Calitri, whom I used to call “Big John.” He was a big Italian guy — tough, white-haired, kind-hearted, laughed a lot. But what I remember best about him is based on a memory of a single hot day during the summer of ’76, and how he and his son (whose name I forget) introduced me to the idea of subconsciously muttering a brand mantra. 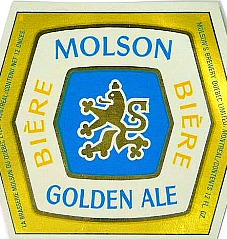 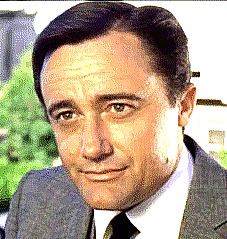 John Calitri & Son both did this on that July or August day, and for whatever reason I’ve never, ever forgotten it.

What exactly is “subconscious brand mantra muttering”? I don’t know if I can describe it in the right way, but it’s the kind of thing you do when you’re feeling tired and bored and in a daydream state, and it just kind of slips out. You’re lugging garden rocks or big bags of fertilizer or unloading fence posts or shovelling sand, and every now and then you find yourself lost in thought and you’re suddenly muttering a brand or a phrase from a film or the name of a TV character or some fast food dish or whatever.

What I’m specifically recalling is that on that particular summer day in ’76 Big John would occasionally (not always but often) finish his sentences (be they orders or urgings or wry commentaries about this or that) with the words “Molson’s Golden Ale.” And on the same day his son was occasionally finishing his sentences with “Walter Chalmers,” the politican character played by Robert Vaughn in Bullitt.

So Big John would say, “Jeff and Dave, you guys stay here and finish up spreading the chips around…you should be done by 4…and we’ll take the truck and get some gas and start on the next job and see you over there…Molson’s Golden Ale.”

John wasn’t saying this “subconciously,” in the precise sense of that term. He was saying it mock-ironically, which is to say he was half submitting to the brand-mantra impulse and half making fun of himself for doing so. He was just in a good-natured Molson’s mood that day or succumbing to a kind of TV commercial ear bug syndrome…whatever.

Is this a very specific form of insanity that I experienced with Big John and his son and a couple of other guys on a single day in Connecticut some 36 years ago, or have others done this or noticed this in other situations?

TV actor Chad Everett has died of lung cancer at age 76, and I’m sorry. On the other hand he was a Republican who supported Richard Nixon in 1972, and therefore someone that I decided a long time ago was some kind of bad egg. But he seemed like a nice enough guy during that “Falling in Love” interview with his wife, the late Shelby Grant, and he did get sober after a struggle with alcohol, which I respect.

So let’s call it water under the bridge and offer condolences to friends, family and fans of Medical Center.

From his Wiki bio: “A Republican, Everett had a much publicized argument with feminist actress Lily Tomlin during the taping of the March 31, 1972, episode of The Dick Cavett Show. Tomlin became so enraged when Everett referred to his wife as ‘my property‘ that she stormed off the set and refused to return.”

“Distinguishing itself from the rash of post-American Beauty Suburbs Suck flicks with Wes Andersonian title cards, The Oranges — taking its name from the affluent New Jersey neighbourhood in which the film is set — finds two close families rended asunder…it’s the Sundance version of Blame It on Rio, which is to say direly lacking in scenery and titties.” — FilmFreakCentral‘s “Bill C.”

The basic action is propelled along by an inappropriate affair between an older married guy (Hugh Laurie) and the much-younger daughter (Leighton Meester) of neighborhood chums (Alison Janney, Oliver Platt).

Everybody likes a little same-sex girlie action. It’s like a dish or a dessert — like soft yogurt. With her mannish haircut and outsider vibe, Riley Keogh‘s “Jack” seems to be the butchier of the two and Juno Temple‘s “Diane”, one presumes, is the swoony and moldable girly-girl. There’s a werewolf metaphor somewhere in the midst of this, but we’ll let that slide. 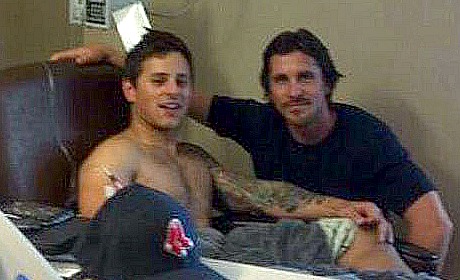 Warner Bros. Publicist #1: “You guys see this? About Christian?”

Warner Bros. Publicist #1: “He’s in a hospital in Aurora. Visiting the gunshot victims.”

Warner Bros. Publicist #1: “So what do we say when somebody calls?”

Warner Bros. Publicist #3: “Tell them we had nothing to do with it.”

Warner Bros. Publicist #3: “Warner Bros, is giving the victims a substantial sum to help alleviate their suffering. That’s our end of it. Christian is in Colorado on his own, representing himself. We need to make that clear.”

Warner Bros. Publicist #2: “I think we should give him a little support, y’know? Show a little heart. Tell people how much we admire him for doing this.”

Warner Bros. Publicist #3: “And what, God forbid, if he says something about the NRA while there? What if…you know, he gets into an argument or an altercation of some kind? It’s happened before.”

Warner Bros. Publicist #1: “What could happen?”

Warner Bros. Publicist #3: “He’s an actor. An adult, a professional and a parent, yes, but an actor all the same. He’s not corporate. He’s there on his own. That’s what we have to say. Why take chances?”

Three days ago I posted a riff about Rachel Wiesz looking “extra-double super-fetching” in The Bourne Legacy “because of the black-rimmed glasses she wears now and then in her role as a scientist.” Well, I sat down yesterday with Bourne director-writer Tony Gilroy, and he said that while Weisz may indeed look fetching in glasses, she only wears them in a couple of scenes. My use of the term “now and then” was therefore inaccurate. The explanation, I suppose, is that Weisz’s bespectacled appearance made enough of an impression to distract or disorient as far as the frequency of same. 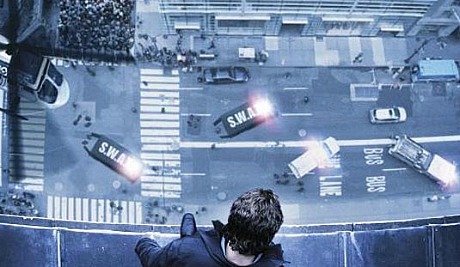 Well, there goes my idea of an exclusive 2012 New York Film festival debut of Roger Michell‘s Hyde Park on Hudson (Focus, 12.7) because of the political-and-cultural FDR-NY connection…forget it. Because it was announced this morning that Hyde Park is debuting at the 2012 Toronto Film Festival. Will NYFF honcho Scott Foundas accept sloppy seconds?

I’m sitting here and sifting through the first batch of Toronto Film Festival selections as we speak. They were announced this morning at a Toronto press conference.

Where’s Paul Thomas Anderson‘s The Master? I don’t see any Master here. Does this indicate a Scott Foundas-engineered North American exclusivity coup of some kind?

Terrence Malick‘s unsold and possibly troubled To The Wonder, which has been imagined as a space-case Oklahoma love story occuring in the mind of a gifted but undisciplined wackadoodle director, will also turn up in Toronto following its Venice Film Festival premiere.

Joe Wright‘s Anna Karenina will pig out and go crazy with 2012 TIFF exposure.

David O. Russell‘s The Silver Linings Playbook will also play Toronto so there’s another debut that Foundas can’t have. If I were Scott I would get on the stick and land (a) Steven Spielberg‘s Lincoln as the NYFF’s closing-night attraction, (b) Robert Zemeckis‘s Flight and (c) Robert Lorenz and Clint Eastwood‘s Trouble With The Curve.

And Juan Antonio Bayona‘s much-awaited The Impossible will also play Toronto. Will this be the absolute first-anywhere debut, or will this Asian tsunami disaster drama peek out first in Telluride?

And don’t give me any of that “oh, wow!…oh, joy!…Looper in Toronto!” jazz. Rian Johnson‘s sci-fi crime actioner starring Joseph-Gordon Levitt and Bruce Willis is said to be pretty good but watch out for Johnson — the quietly oppressive Brick convinced me that he’ll be a problem for many, many years to come. Besides, Looper opens on 9.28, or two weeks before it plays Toronto…big deal.

Does anyone jump off a skyscraper in Looper? Isn’t it contractually assured that in every big-studio sci-fi, comic-book-based or futuristic actioner a significant character HAS TO JUMP OFF A BUILDING? That may be so but I’m telling you right now that any and all building-jumpings are hereby verboten, and any film that includes one henceforth will suffer the consequences.

Pablo Larrain‘s No, one of the surprise hits of the Cannes Film festival two months ago, will have its major North American exposure at Toronto.

The TIFF Galas and Special Presentations include Ben Affleck‘s Argo (a kind of double-header for Affleck when you add in the Malick), the mind-bending. German-financed, Wachowski/Tom Tykwer Cloud Atlas, Derek Cianfrance‘s The Place Beyond The Pines, Billy Bob Thornton‘s Jayne Mansfield’s Car (which played in Berlin), Robert Redford‘s The Company You Keep (a Lem Dobbs-written thriller about a former ’60s radical on the run after a journalist exposes his identity), Stephen Chobosky‘s The Perks Of Being A Wallflower (a Mr. Mudd production) and David Ayers‘ End of Watch.

Nicholas Winding Refn‘s Only God Forgives was teased in Cannes (I saw the footage at the Salles du Soixantieme) so where is it?

I don’t have Clue #1 about Noah Baumbach‘s Frances Ha…nothing. But it’ll be in Toronto.