In his rundown piece about the 69th Venice Film Festival, Variety‘s Nick Vivarelli quotes topper Alberto Barbera as follows: “In preparing Venice I have very much admired and envied my friend and colleague [Cameron Bailey] who heads the Toronto Film Festival. He has an easy job: he can take 350 movies and therefore accept almost anything. We have chosen a much tougher path, in which, after lots of discussions, we had to say ‘no’ a lot. And it was very tough.”

In other words, it’s much easier in a sense to run Walmart than a small boutique catering to a select clientele.

The officially approved trailer for the Wachowski/Tykwer (Warner Bros., 10.26) appears on Apple at 10 am, but until then…

I never feel more wired or attuned or plugged into the hurly burly than when I’m trying to decide which train to go with, the local or the express. What a feeling when you’ve chosen correctly, and what a crushing downer when you haven’t and your train is just sitting there, doing nothing and waiting for nothing as time stands still…blah.

Movieline‘s witty Stu VanAirsdale, a daily columnist and composer of the site’s Oscar Index charts, announced today that he’s pushing on. What happened is that either Movieline owner Jay Penske or a Penske stooge brought in N.Y. Daily News veteran Frank DiGiacamo above VanAirsdale, telling the latter that his copy would henceforth be edited by FDG, and so Stu took the hint. The fact that Movieline also dumped critic Stephanie Zacharek indicates that they’re hoping to tone down the snide urbanity and radiate more of an industry-friendly, go-go attitude. 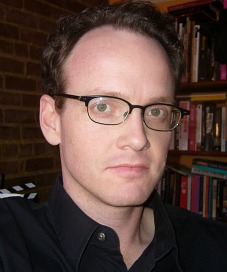 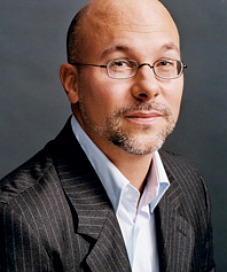 Imagine that the Aurora massacre happened exactly three years earlier — in mid July 2009. And ask yourself what kind of a jam Quentin Tarantino‘s Inglourious Basterds would be in right now with its finale depicting a flaming slaughter inside a Paris movie theatre.

You know that Tarantino and Weinstein Co. chief Harvey Weinstein, who released Basterds on 8.21.09, would be sweating bullets right now. Re-shoot and delay the release date like The Gangster Squad has just done, or hang tough on the presumption that the killing and burning of the Nazi high command in a theatre will be seen as okay because they’re evil fucks who deserve it? I don’t think that would wash.

And by the way, what about the theatre shooting in Bobcat Goldthwaite‘s God Bless America with Joel Murray wiping three or four kids texting or talking on the phone? Different context and satiric intent, of course, but there would still be worries if it was slated to open within the next few weeks or months, I would think. (Thanks to Dave Dubos and a certain director-screenwriter friend for reminding me of these precedents.)

Last night The Hollywood Reporter‘s Gregg Kilday and Matthew Belloni informed that Warner Bros. will probably postone the September 7th release of Ruben Fleischer‘s The Gangster Squad until January 11th, 2013 in order to allow for a reshooting of a scene involving a movie theater shoot-out.

The concern, obviously, is that this scene is too similar to last week’s Aurora massacre, and that it’s better to be safe than sorry by replacing it. The original scene will almost certainly appear on the Bluray down the road…right?

So that’s it — The Gangster Squad is being seen as a compromised, hard-luck film, and is now limping and stooped over and off to the showers. It’ll never again generate any real excitement, not after this. Expectations were a bit dicey to start with (i.e., the Fleischer factor), but now the wind is really out of the sails. If I was running the show I would get the re-shoots done lickety-split and get The Gangster Squad into theatres by late November or December. I’m sorry but a January opening just sends the wrong message.

It’s obviously fine and proper for the Hollywood Reporter to run some articles about the cultural and political after-effects of the Aurora shooting. But somehow that illustration feels a bit wrong. Batman shedding a blood tear? And the title of Gregg Kilday‘s piece, “The Dark Knight Rises Is Still an Oscar Contender,” implies that it may not be a contender in the minds of those who feel the movie is now somewhat “tainted, however unfairly,” as Kilday puts it, due to the Aurora association. Why bring it up then? 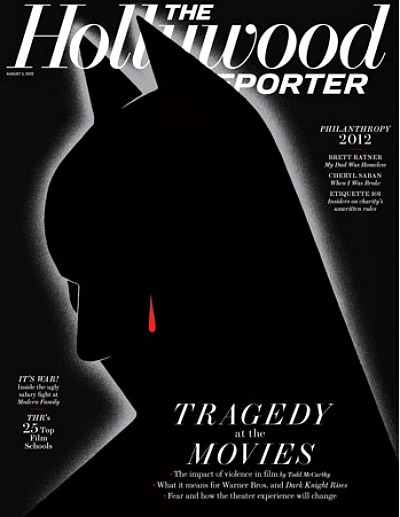 It would be the height if venal industry-think to allow the deplorable deed of a single red-haired psychopath to influence anyone’s Best Picture judgment. That has to be one of the stupidest shorthand Academy riffs I’ve ever heard. If anything nominating TDKR for Best Picture would be a refutation of the association that Kilday refers to. On top of which everyone knows that the Academy owes director-writer Chris Nolan for ’09’s Dark Knight snub so anyone even referring to an Aurora association needs to shut up.

Who woulda thunk that Glenn Kenny is a bit of a choirboy when it comes to assessing or judging the turbulent realms of love, longing and heartbreaks? Don’t look now, but arduous and indiscriminate shagging without regard to peace treaties or boundaries or marriage licenses has been going on for thousands of years. Kenny would do well to read “Romantic Revolutionary,” a biography of John Reed. My God, the dinking that went on among the pre-World War I radical-socialist set!

Forget the Twitter captures — just go here and here and piece it together.

The problem with the world out there is that there are tens of millions of people like this, and there are only a few hundred thousand people like me (or…you know, people who sense complexity and who try, however successfully or unsuccessfully, to comprehend the whole equation, or are at least aware that there’s something called “the whole equation”). But no. The majority rules, and that’s why so much of what constitutes life on this planet (as least in terms of community consensus) is tiresome and sad and banal and hellish.

Spacey, of course, is completely rational, lucid, perceptive, insightful and even Zen-like in this scene, which happens in Pitt and Morgan Freeman‘s moving car as they drive towards a desert rendezvous near the end of Act Three. Spacey seems all-powerful, in fact — the antithesis of the guy Pitt has described. But James Holmes is a loon. He’s in, he’s out, he’s listening, he’s not listening, he’s talking to himself, he’s bobbing his head, he’s haunted, he’s widening his eyes, he’s half-closing his eyes. There’s definitely a discussion going on between Holmes and his demons.

If you were to take Holmes to the edge of a cliff that looks down upon a swamp pond filled with hungry alligators and tell him “okay, you’re going in, pal…any last words?,” I think he’d just bob his head again and blink his eyes and shrug his shoulders and go “alligators?”

Holmes’ jailhouse behavior has been erratic, according to TheWrap‘s Alexander C. Kaufman, citing reports by ABC News and the N.Y. Daily News.

“Authorities muzzled him with a spit guard after he would not stop spitting at guards,” Kaufman reports. “And when police put evidence bags over his hands to preserve traces of gunpowder residue, Holmes — who allegedly told police he was the Batman villain the Joker — pretended the bags were puppets.”

You can dismiss the “Kristen Stewart apparently cheated on Rob Pattinson with Snow White and the Huntsman director Rupert Sanders” story all you want, and I won’t argue with you. There are few things in this world more powerfully disgusting than the tabloid gossip industry. What a constant ordeal it must be to not have the freedom to make mistakes and/or fuck things up in a private (or at least a semi-private) way.

I’ve had that freedom all my life and I know one thing, and that’s if you’re going to play around on the side you have to follow Moscow Rules. You have to become a CIA double-agent in East Germany in the early ’60s. Cheating should never be embarked upon with the idea that you’re probably going to get caught…unless, of course, you’re cheating with that precise idea in mind. Women do this. I’ve seen it first-hand. They feel suffocated and their subconscious is screaming and so they secretly want to get busted so something will change. Or at the very least so they’ll be “heard.”

I’ve been “the other guy” in two long-term cheating relationships — one with a fellow journalist who was married, another with a woman who was living with a guy — and both times les femme infideles handled themselves like Kim Philby, and I’m saying that with respect. You can’t be a casual cheater. You really, really have to watch your back and cover your tracks. You have to be brilliant.

How could Stewart have met up with Sanders without knowing deep down that she stood an excellent chance of being busted by the paparazzi? That’s what I think is fascinating here. This isn’t just a messy emotional drama, but one containing a metaphor about the hungry, sometimes unruly heart. It’s about how unfulfilled, frustrated artists (however gifted or un-gifted they may actually be) are like kindling ready to ignite at the drop of a hat. It’s about how some people can’t cope with those vague feelings of imprisonment that simmer beneath almost all healthy relationships. And it’s obviously about Stewart (and cheers to her for this) expressing a flash of intense anger and/or revulsion for the Twilight franchise. She got a taste of what being in a real movie was like when she took a supporting role in Walter Salles‘ On The Road and then she looked at her own creations and said “what the fuck am I doing?” and started to go crazy.

Maybe she realized b.f. Rob Pattinson has nowhere to go but down after seeing him in David Cronenberg‘s Cosmopolis. It’s possible she said to herself as she sat in that screening room and said, “I love Rob but he’s going to need more and more support as things gradually start to collapse for him over the years, and I don’t want to be Esther Blodgett/Vicki Lester…I want to be Isadora Duncan!”

I don’t believe her apology statement, which her publicist sent to People today. Okay, she probably is feeling “sorry,” but who wouldn’t be after they’ve been totally busted? It’s what you say or do on your own before you’ve been caught that counts. I think she was pushed into apologizing by her handlers. She shouldn’t have to say “I’m sorry” to anyone except RPatz.

A couple of months ago Stewart told Elle‘s Holly Millea that “you can learn so much from bad things. I feel boring. I feel like, Why is everything so easy for me? I can’t wait for something crazy to fucking happen to me. Just life. I want someone to fuck me over! Do you know what I mean?”

Fuck the Twihards and their dipshit fantasies. Grow up, little girls. The world is a much richer and stranger place than you have so far imagined in your philosophies.

So laugh or sneer all you want, but Tom Stoppard (The Real Thing) or the late Harold Pinter (Betrayal) could take this