Is Glenn Kenny the man of vision and principle who can straighten out these Detroit guys? Who’s better suited?

I’m not saying the following 2012 films were the year’s worst, although many will agree that they are. I’m saying that except for one that I didn’t see (Atlas Shrugged, Part II) but heard was Godawful, they gave me a lot of personal grief. I’ve listed them in the order of worst first and most tolerably bad last.

I’ve got Django Unchained listed as the 18th most painful sit because of the “dead zone” second hour. One of the many reasons I’ve got Prometheus listed as my 14th worst, I’ll admit, is because of the mandals worn by Michael Fassbender in the first spaceship scene, but I could go on and on about that film. I’m sure I’ve overlooked a stinker or two.

This kind of family comedy is much more popular, generally speaking, than smart, prickly, emotional family comedies like Silver Linings Playbook. All real Americans laugh heartily when the main character is kicked or baseball-batted in the privates. If only David O. Russell had included a couple of ball-crushing scenes, SLP might be $10 or $20 million richer right now. (No?) Dumb and obvious rarely goes hungry.

The Google Maps app became available today or yesterday. I downloaded it a half-hour ago. A beautiful thing. All the sublime features plus whatever’s new. Fast loading, voice directions, an address appears when you press down. Comfort and joy. 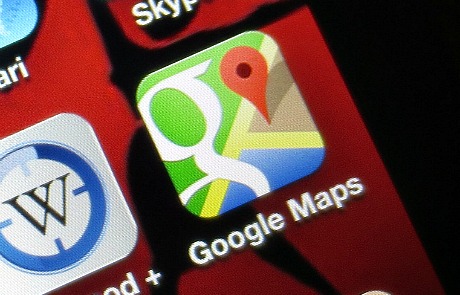 Most of President Obama‘s message about this morning’s school shooting was about grief, particularly his own. He offered one lousy sentence about a need for “meaningful action to prevent tragedies like this, regardless of the politics.” Obama is a lame duck. What can the NRA do to him? He can do and say whatever he wants. And he can’t even utter the words “gun control”?

There’s a delicious moment near the finale of Zero Dark Thirty. A moment of profound giddy finality. It happens toward the end of the assault upon the Osama bin Laden residence/fortress in Abbottabad, when two U.S. Seals are crouched and aiming weapons just outside the doorway to Bin Laden’s third-floor room. And one of them says in a raspy half-whisper, “Osama?” Pause and again: “Osama?” He might as well be saying, “Your destiny…we’re here!…come to us!”

5 Comments
Coffee, Tea or Me?

I’ve never flown with an all-gay crew of flight attendants but whatever. Gay guys are always a tad more responsive, just a tad more alert and obliging. Gays guys in the skies. Dancing, singing…all gay, all the time. Hopefully this new Pedro Almodovar film will debut in Cannes next May. All Pedro films are perfect, even the lesser ones.

There is no bloody horror, no body count, no level of carnage that will stop the National Rifle Association from preventing any restrictions on the availability or purchasing of firearms in the US of A. Any determined nutter in the world can weapon up and barge into a school and shoot as many kids as he/she wants. This is America. This is the culture and the country that we’ve made for ourselves. Congratulations once again to the gun lobby, assholes, crusty rural Republican militants, cowards, gun fiends. 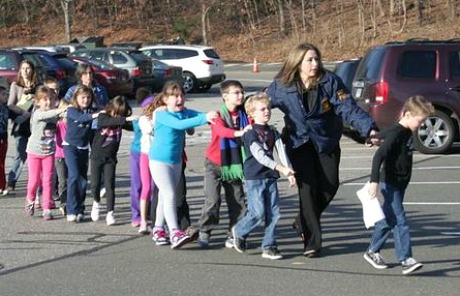 Presumed NRA response: This more than ever makes an argument for the free and unrestricted availability of firearms to one and all, because if the right Dirty Harry had been in the Newton school and was packing, he/she could have taken out the shooter and saved lives.

27 dead, 20 of them kids, possibly all from the same kindergarten class. 6 adults dead plus the shooter.

But The New York Post — and other media outlets citing police sources are now reporting that the shooter is not 24-year-old Ryan Lanza but his brother, 20-year-old Adam Lanza, who killed his mother, a kindergarten teacher at Sandy Hook and possibly another person at a Connecticut home close to the school, who reports say is another relative. Ryan Lanza is alive and has been questioned by police,

The deceased shooter was 20 year-old Adam Lanza. (His bother, 24 year-old Ryan Lanza, was incorrectly identified as the shooter earlier today.) The mother of the Lanza brothers, also dead, was a teacher at Sandy Hooks school. The shooter was reportedly dressed in black commando garb like the wackjob who wasted moviegoers in Aurora, Colorado. One Glock, one Sig Sauer. 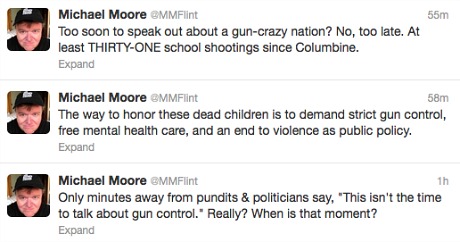 At the end of his review of Ken and Sarah Burns’ The Central Park Five, New Yorker critic David Denby writes that news of the innocence of the five defendants in the 1989 Central Park rape case “got nowhere near the attention that the professions of their guilt did. Few people seemed to want to know. The five men initiated a civil lawsuit against the city that has dragged on for nearly a decade. This movie should hasten some sort of final reckoning.”

That’s a chickenshit way of putting it. There’s absolutely no logical way to dispute that the defendants, now in their late 30s, are entitled to be compensated for being railroaded into jail and having their youth destroyed by a racist and callous justice system. And yet Denby and his editors decided to beat around the bush with a namby-pamby generality.

Here’s how I put it on 10.30: “New York City needs to do more than simply admit error in case of the wrongly-convicted, wrongly-imprisoned Central Park Five — Antron McCray, Kevin Richardson, Raymond Santana, Kharey Wise and Yusef Salaam. Nine years ago the five filed a federal lawsuit against the city, seeking $50 million each in damages or $250 million total. If anyone deserves to be financially compensated for a perversion of justice, it’s these guys. Let’s hope that the five full financial compensation.”