I’ve just downloaded YouTube Capture to the iPhone5. “The app lets you record a video clip, write a caption, select which networks you want to share to, and publish”…wham. Doesn’t just upload to YouTube, but to Google+, Facebook, and Twitter. Includes color correction and stabilization, and “it lets you trim the length and add free background music from YouTube.” I use my own music choices or nothing.

“After all the female avengers of the past fifteen years — Uma Thurman and Angelina Jolie kicking men in the ego and other places — American movies have at last produced a woman clothed, like Athena, in willful strength and intellectual armor.” — New Yorker critic David Denby writing about Jessica Chastain‘s “Maya” in Kathryn Bigelow and Mark Boal‘s Zero Dark Thirty.

14 Comments
“These People Are Restless, Man”

Last night I attended a q & a between Silver Linings Playbook director-writer David O. Russell and Jeff Goldsmith. Russell was fresh and fluid as ever, a nonstop power-pulser. He doesn’t “talk” as much as he channels thought streams and turns on the spigot and out they come. I recorded the whole thing but Goldsmith said “no, no, wait…not yet…Wednesday!” I said “okay, man, whatever, but now is NOW. This stuff doesn’t age well. You have to put it out there. Time’s a wastin’.” 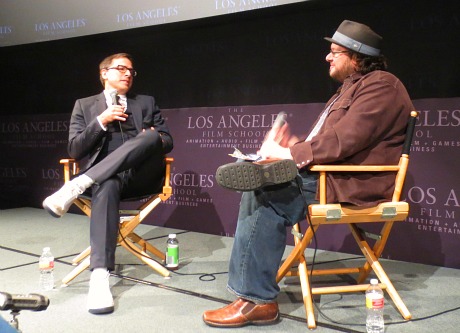 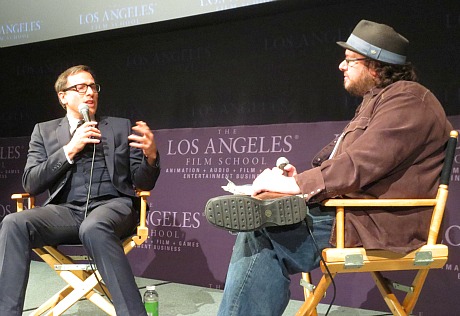 After chatting for an hour-plus, Russell suggested that they take questions from the audience. He sensed that the time had come, he told Goldsmith — “These people are restless, man.”
December 17, 2012 3:07 pmby Jeffrey Wells
7 Comments
Finally!

Sony Classics is opening Pablo Larrain‘s No — an all-but-certain nominee for Best Foreign Language Feature — on 2.15.13, and here, I gather, is the first English-language trailer. I called it “one of the smartest, well-layered and riveting real-life political dramas I’ve seen in ages” after seeing it in Cannes. Indiewire‘s James Rocchi called No “exactly the kind of film you hope to stumble across at Cannes…[something] well-made, superbly acted, funny, human, warm, principled…fiercely moral and intelligent.”

I’m sorry but I’ve said many times that the standard-issue “free-falling from a great height” schtick is a stopper for me. Jumping off 200-foot cliffs into the ocean will kill you as surely as it killed Tony Scott. Don’t even bring up the male-protagonist-falling-from-a-tall-building shot — it’s been done so often there should be an automatic DGA fine for this. JJ Abrams knows how to play the big-action-movie game much better than I, but why can’t there be thrills and threats that are realistically digestible?

Urban-action-fantasy heroes don’t drop cyanide capsules or shoot themselves in the temple or walk in front of speeding cars because we all know these things kills…but they can jump off any cliff or tall building they want and it’s always “wheee!” Video-game perversion.

The Newtown revulsion of the last three days is very much in the air, and I don’t think this is going to do any favors for Django Unchained, which [NON-SURPRISING SPOILER] is drenched in blood towards the finale…bodies on the floor, blood on the walls. It would be one thing if Tarantino was an earnest, hard-core, straight-on filmmaker in the Michael Haneke mode. But he’s all about “attitude”, flip humor, irony and references to ’70s movies, and to pour blood on top of that? Doesn’t feel right in this climate.

It seems provincial and small-minded to say this, given the much larger ramifications, but I think Newtown has probably hurt Django a lot.

Right now, I’m told, it’s Tarantino vs. David O. Russell vs. Tom Hooper for the fifth Best Directing Oscar nomination. This assumes that Steven Spielberg, Ben Affleck, Kathryn Bigelow and Ang Lee are locks…but are they? I think QT is out right now and that the divided reaction to Les Miz speaks for itself, and that the five finalists are Spielberg, Russell, Affleck, Bigelow and Lee.

90% of the clips in this mashup are from disposable, disreputable ADD/CG films with the usual emphasis on shouts, wallows, emotional explosions and “kapow!” impact cutting. No explortion of themes, thoughts, social current, echoes. 2012 was a much more nourishing year than is indicated here. I’ll wager than the editor, genrocks, is youngish, geeky, hyper-ish.

Cheers and thumbs-up to the Indiana Film Journalists Association for handing its Best Picture and Best Original Screenplay awards to Colin Trevorrow and Derek Connolly‘s Safety Not Guaranteed — a fairly novel and highly agreeable little indie. I know that sounds a little patronizing but I don’t mean to indicate that. I never riffed on it much, but I saw it…what, last summer? 80% appproval.

On the other hand…whoa! The IFJA giving their Best Director prize to Quentin Tarantino for an undisciplined and absurdly overlong wank like Django Unchained? I’m sorry but that’s ridiculous. A few more calls like this and their credibility will be in jeopardy.