“Despite its striking use of authentic L.A. locations, from Union Station to the Hollywoodland sign, this highly stylized retelling plays as artificially as a stagebound musical, owing, in part, to Chicago d.p. Dion Beebe‘s deeply shadowed, nearly all-nocturnal lensing.” — from Peter Debruge‘s 1.6 Variety review.

To me, Al Pacino sounded less-than-forthcoming during a recent press conference to promote HBO’s Phil Spector, a David Mamet-directed and written drama about the murder trial of Phil Spector (Pacino) and his relationship with attorney Linda Kenney Baden (Helen Mirren), who represented the ’60s pop music maestro in his first trial for the murder of actress Lana Clarkson. 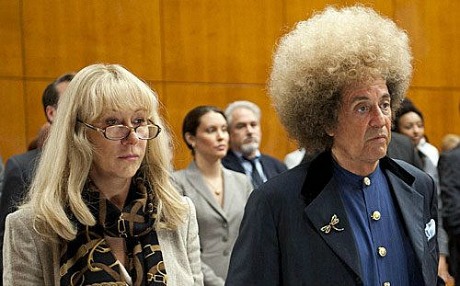 He said he “didn’t feel the necessity to meet” Spector because the jailbird Spector “would have been…a different person. The person I’m playing is the guy who was there before he was convicted.” Fine, but then he said “I played him as what I believe David Mamet wrote and how I believed to interpret him.” And that was it?

I’m going to ask a three-month-old question again, and this time it’s addressed to Pacino and well as Mamet. Are you guys telling me that neither Pacino nor Mamet has watched Vikram Jayanti‘s The Agony and Ecstasy of Phil Spector? Are you telling me that the idea to make a Spector film wasn’t at least partly inspired by Jayanti’s doc, which aired on British TV in 2008 and opened at the Film Forum in June 2010?

Your film came together in (I believe) either late 2010 or early 2011 and was shot sometime between the middle and final-third of that year, and you’re telling me the idea just occured to Mamet or producer Barry Levinson all on its own & out of the friggin’ blue?

No offense but I don’t think so, guys. You should do the decent thing and give credit to Jayanti, if not contractually then at least in interviews.

Here’s that longish article I wrote about Jayanti’s doc on 6.26.10. It’s a good piece of writing if I do say so myself.

Phil Spector will premiere on HBO in February.

18 Comments
To Be Hung on Judd Apatow’s Wall

In a 1.4 posting, New Yorker critic-columnist Richard Brody has written that the vision of marital love in Judd Apatow‘s This Is 40 is “far more complex” than the vision of same presented in Michael Haneke‘s Amour. And he more or less calls Haneke a kind of death-savoring fiend.

Here’s an excerpt from the piece [SPOILER WARNING]:

“[Haneke] films his elderly couple (Jean-Louis Trintignant, Emmanuelle Riva) with a superficial simulacrum of wisdom and experience, strips them of traits in order to reduce them to the function of the film to render the appalling act [i.e., a mercy killing] justifiable, to strip out the appearance of mixed emotions. And yet, what comes through is that Haneke likes filming a killing, takes a smirkingly ghoulish look at the act, and takes unconscious pleasure in the unconscionable.

“As Georges smothers the incapacitated Anne under a pillow, her legs kick in resistance: she may be willing to die, but that doesn’t mean she’s ready to stop living. Nothing in Georges’s demeanor suggests anything but the desire to end Anne’s misery, in defiance of any objection the world might make. How he faces that opprobrium, or the force of law, we can only imagine.

“Haneke either knows and doesn’t show it, or doesn’t bother to imagine it; but, for him, it doesn’t matter. He has had his fun. He has shown murder and made his viewers love it, has brought them into complicity with his smirkingly ghoulish pleasure. The hollowness of the contrivance conceals the grotesquerie of the sacralized Grand Guignol.

“Where Django Unchained suggests Quentin Tarantino’s unconscious delight in the unconscionable Amour reflects Haneke’s calculated desire to stir up a reaction by way of a cynical ambiguity, to recalibrate a moral shock with an overwhelming preponderance of mitigations.

“Would the ostensible mercy killing appear less justified if the couple were longtime fans of yé-yé or Plastic Bertrand rather than Schubert, if they casually flung political opinions of any stripe, if they confided in friends, if their discussions with doctors were observed — in short, if they seemed to live anything other than a life of hermetic perfection? The vision of marital love in This Is 40 is vastly more complex.”

Ridley Scott‘s Prometheus has been so widely trash-canned that this piece seemed redundant when I first saw it…what was it, 10 days ago? On top of which it didn’t engage because the narration was so rushed. But it works now with subtitles. Can Scott ever be “Ridley Scott” again after this debacle? Has his rep been permanently sullied?

“How many times…did I view the trailer for Prometheus? How many man-hours did devotees of Alien and Aliens give to the scrutiny of each mini-scene and to every nook of the teaser’s frame, wondering what Ridley Scott might supply to feed our craving? And how could the eventual film, bursting from the chest cavity of that promise, do anything other than disappoint?” — New Yorker critic Anthony Lane, posting on 12.12.

Michael Haneke‘s Amour is going to win the Best Foreign Language Oscar on February 26th — locked, done, sealed. Anyone who writes “whoa, not so fast…the winner might be Olivier Nakache and Eric Toledano‘s The Intouchables!” is just wanking the pot. Yes, some prefer this film’s emotional clam-broth to Haneke’s icy austerity, but their numbers are relatively few.

If I was a behind-the-scenes godfather-poobah who could just point and dictate the winner, I would give the Best Foreign Language Oscar to Pablo Larrain‘s brilliant and mesmerizing No. Amour, which I’ve been completely turned around on (respectful repulsion in Cannes morphing into hardcore admiration after watching it three more times in LA), has been feted enough. But that’s me. And if I couldn’t order a win for No, I’d give the Oscar to Christian Petzold‘s Barbara, which won me over in Telluride.

Is there anything valid to say about the general Academy situation facing foreign-language contenders? Yes, says L.A. Times reporter Mark Olsen in a 1.6 article. Kill the rule that allows the country of origin to determine the nominee — a process that inevitably makes this selection almost entirely about local back-scratching.

“Some see the [Best Foreign Language selection] process as perennially flawed until the academy reconsiders the one-film-per-country rule,” Olsen writes. “At the Golden Globes, for example, where no such rule exists, the official French Oscar submission of The Intouchables and another well-regarded French film, Rust and Bone were both nominated.”

Four of the Oscar shortlisted films are in French, he notes, but Rust and Bone, Jacques Audiard‘s meditative relationship drama that everyone was approving in Cannes, couldn’t be nominated by the Academy because The Intouchables had the favor of the French film establishment because it made a lot of money.