If you’re an Italian film buff or a travelling-whore entertainment journalist, you could do worse than attend the Capri Hollywood Film Festival, which ran from 12.26 through 1.2. And it’s nice to know that 86 year-old Lina Wertmuller, the legendary director of Seven Beauties, Swept Away and The Seduction of Mimi, is the honorary chairperson of the Istituto Capri nel mondo, which organizes the festival. Ditto that Silver Linings Playbook has won four awards from the CHFF, including Best Film of the Year, Best Actor (Bradley Cooper) and the Capri Hollywood Audience Award.

And it’s noteworthy that Wertmuller has praised David O. Russell‘s film, calling it “the most brilliant romantic comedy in years, but also a real audience-pleasing movie with a heartwarming story and amazing performances.” It never hurts to shower praise on a well-made film, especially if your position requires it.

But for whatever reason (and I can’t quite put this into words after trying for ten minutes), it feels a bit queer to hear the once-great Wertmuller melt over SLP, good as it is and as much as I love it. This is a woman who once stood as a collossus, a woman who blazed a trail by fusing leftwing politics and liberated sexual issues and farcical acting styles…from the early to late ’70s Lina Wertmuller held mountains in the palm of her hands. I don’t know what I’m saying except…I don’t know what I’m saying. 35 to 40 years is a long time ago?

Hollywood Elsewhere would be very interested in prostituting itself in the service of the next Capri Hollywood Film Festival in exchange for air fare and accomodations. That’ll probably never happen with Italy being in a financial crisis and all, but if you don’t speak up…

If you do a search on Politico for “Boehner to Reid go fuck yourself,” nothing happens. And yet a Politico story about the Republican Speaker of the House having twice told the Democratic Majority Leader to do this inside the White House last Friday broke last night about 10:20 pm Pacific.

If I was writing for Late Night for David Letterman, tonight’s joke would go something like this: “So those really intense fiscal cliff negotiations…you’re all up to speed on that, right? Nobody is. Anyway, turns out that last Friday, and just outside of the Oval Office yet, John Boehner, the Republican Speaker of the House, lost his cool and walked up to the Senate’s Democratic Majority Leader Harry Reid and said, according to one well-placed source, “You worthless secretion of brown-green slime sliding down my leg under my suit pants…go fuck yourself!” To which Reid replied, “Whoa, what…whaddaya mean?” To which Boehner replied, “You heard me, you wretched contemptible piece of dogshit! Go fuck yourself!” But the quote was trimmed down for publication.”

It was the story of the night because it’s comforting to know that older men in high positions of authority, men expected to keep up appearances and maintain decorum and civility at all times, lose it just like we all do now and then, or specifically like I do when I’m having issues with one of my Macbook Pros.

That horrible blank-screen, page-refusing-to-load problem that has afflicted Hollywood Elsewhere for almost three days has been solved. The guy who fixed it about an hour ago is known to Softlayer customers as “Jefferson S.” I felt this huge surge of affection. I wrote him and said “Please call me or let me call you so I can thank you profusely! I can’t believe it. YOU FIXED THE PROBLEM!” After three or four other tech support guys couldn’t crack it. A smelly 75-pound monkey has been lifted off my back.

What January 2013 films are even half-worth seeing? I don’t believe that Ruben Fleischer‘s Gangster Squad (Warner Bros., 1.11) is going to be much. Taylor Hackford‘s Parker (Film Disrict, 1.25)…who am I kidding? For the most part Jason Statham seems opposed to starring in crafty, above-average films — his last decent effort was ’08’s The Bank Job. I’ve heard that Kim Jee-Woon‘s The Last Stand (Lionsgate, 1.18) is a real January release. Mark Wahlberg + January 18th = Allen Hughes‘ Broken City. We’ve all heard about Andres Muschietti‘s Mama (Universal, 1.18)…half decent, not too bad.

This is why the Sundance Film Festival (happening this year between 1.17 and 1.27) is so terrific. It saves you from the January blahs and provides a respite from the Oscar race (which, yes, is a lot more interesting this year).

I haven’t read James Wolcott‘s Vanity Fair cover piece on Jennifer Lawrence, but I know this photo argues strenuously against almost everything she delivered in Silver Linings Playbook. Tiffany is/was/always will be the no-bullshit, stare-into-your-soul, broken-wing girl — a little gothy, fucked-up, vulnerable, impulsive, brilliant, feisty, raspy-voiced, loyal and honestly…? Not all that “hot” in a conventional flash-glossy Maxim sense. She’s way above that, a force of nature, a powerhouse. In short, the VF cover shot is a kind of diminishment. 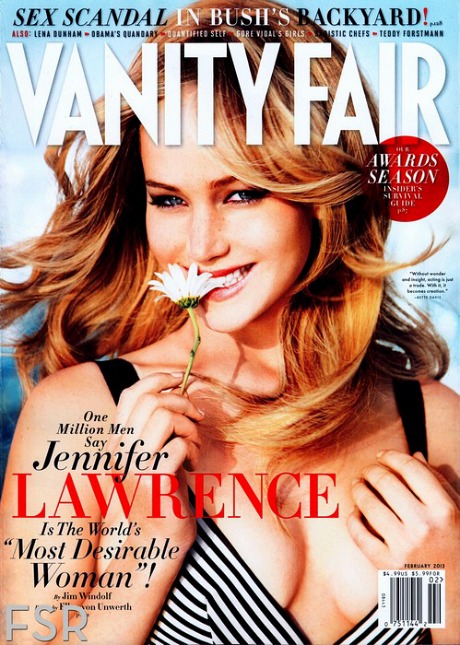 No Comments
This Sucks

Apart from the submental whoo-whooing from the drunks, last night’s Eiffel Tower light show in Paris was really sub-par…if this is in fact what happened. Where were the fireworks? Was their absence an austerity measure by French president Francois Hollande? The Tour Eiffel sparkly-twinkly thing happens every night in Paris after dark. It’s nothing. I saw the greatest fireworks show in my life 13 years ago in front of the Eiffel Tower…me and the kids. I’ll never forget it.

Posted two years ago: One, I haven’t been to a New Year’s Eve party in ages. And two, my last really cool New Year’s Eve celebration happened 12 years ago in Paris. But as I have nothing new to say, it couldn’t hurt to post the best-written humbug rants from the last four or five years.

Posted last year: “There’s nothing fills me with such spiritual satisfaction as my annual naysaying of this idiotic celebration of absolutely nothing.

“I love clinking glasses with cool people at cool parties, but celebrating renewal by way of the hands of a clock and especially in the company of party animals making a big whoop-dee-doo has always felt like a huge humiliation.

“Only idiots believe in the idea of a of a midnight renewal. Renewal is a constant. Every morning…hell, every minute marks the potential start of something beautiful and cleansing, and perhaps even transforming. So why hang back and celebrate a rite that denies this 24/7 theology, and in a kind of idiot-monkey way with party hats and noisemakers?

Posted six years ago: “My all-time best New Year’s Eve happened in Paris on the 1999-into-2000 Millenium year — standing about two city blocks in front of the Eiffel Tower and watching the greatest fireworks display ever orchestrated in human history. And then walking all the way back to Montmartre with thousands on the streets after the civil servants shut the subway down at 1 a.m.”

Posted five years ago: “I need to stay in the city until sometime in the early morning, despite the intense cold and wind. I live below a family of animals — Hispanic party elephants — who stomp around and play music so loud that the building throbs and the plaster cracks. It’s a fairly safe bet they’re going to lose their minds tonight so I may as well just huddle down in the city and bounce around from bar to bar. New Year’s Eve is the emptiest holiday ritual of the year, and an opportunity for shallow under-30s to act like assholes.”

Posted seven years ago: “I’d say ‘Happy New Year’ to everyone, but…all right, ‘Happy New Year.’ But I’ve always hated saying those words. Nothing’s ‘happy’ by way of hope. Happy is discovered, earned, lucked into, found. At best, people are content, joyously turned on for the moment, laughing or telling a funny story or a good joke, placated, relaxed, energetic, enthused, full of dreams, generous of heart, intellectually alive…but ‘happy’? The word itself has always struck me as one that only simple minds would use.

“I’m not forking over $14 to any bartenders for a drink. Anywhere. I don’t care who I’m with or what anyone thinks of this policy/attitude. I’ll give $14 to a homeless person first. I won’t give my money to anyone or anything that rubs me the wrong way tonight. I hate everything about New Year’s Eve, especially young guys going ‘ooowwwoooaaagghh!’ in animal bars as midnight approaches.

“We all know the same mistakes are going to be made over the next twelve months, and that the only thing certain is that everything will be more expensive twelve months from now. The only comfort I have is this: the morons who believe global warming is a myth are going to meet each other at parties and get married and have kids and try to teach their children that global warming is a myth, but a significant number of these people are going to fail in this effort because kids always see through their parents’ bullshit.”

From the Wiki page: “‘Auld Lang Syne=’ is a Scottish poem written by Robert Burns in 1788 and set to the tune of a traditional folk song. The title may be translated into English literally as “old long since”, or more idiomatically, ‘long long ago’, ‘days gone by’ or ‘old times.'”

Crippling website problems, WordPress transfer finessings and server shiftover issues have occupied me constantly for the last seven hours. Things are either getting better or starting to look better…or are more or less exactly the same way they were yesterday. Either I don’t know or I’ve forgotten or I’m so exhausted and/or bitter that all I want to do is nod off or throw up. I know I can’t do this any more today. All I can say for sure is that so far 2013 has been a shit year.