Support on Patreon Follow @wellshwood
55 Comments
What Were The Lincoln People Thinking?

The DGA Best Director award going last night to Argo‘s Ben Affleck makes it a 99% certainty that Steven Spielberg‘s Lincoln won’t win the Best Picture Oscar. Now that we know the score, I’d like to openly ask all the Gurus of Gold and Gold Derby prognosticators who stuck with Lincoln all through December and especially January a simple question: why? What tea leaves told you that there was enough serious passion out there to push this well written, ploddingly paced, passionately performed grandfather clock of a movie into the winner’s circle?

We now know that the passion was never there, not really. And yet for weeks Team Lincoln told us over and over again “it’s the likeliest winner, what other film has the stature?, it has to happen, it’s Spielberg’s best in years, it’s too good a film, it’s about a legendary U.S. President, it’s made well over $100 million” and so on. Even after those Argo wins at the BFCA, Golden Globes and the PGA and especially after Bill Clinton‘s Lincoln plug at the Golden Globes suggested to some of us that the hand had been overplayed, a lot of people still held fast. Why? What vibrations from what insect antennae told you to stick? I’m honestly curious.

Yes, I had Lincoln down as my own Best Picture prediction for a while but I did so with resignation and depression. From the beginning I saw Lincoln as a lazy default choice. It was just sitting there like a lump of mashed potatoes. I couldn’t wait to dump it after sensing a change in the wind.

My pet theory: The downfall of Zero Dark Thirty sealed Lincoln‘s fate. If ZD30 hadn’t been torpedoed by the Stalinists and had held on the strength it had in early December with all the critics awards, it would have taken a lot of support away from Argo, which after all is a more congenial and entertaining version of the same basic story (i.e., a brilliant CIA maverick bucks the bureaucratic tide in order to push through a secret, risky-seeming CIA operation in the Middle East that involves hoodwinking Islamic militants and which ends in delicious success). The Argo and ZD30 votes might have split the faction that is now voting entirely for Argo, and Lincoln might have inched ahead and become the favorite…maybe.

Dr. Svet Atanasov‘s review of the triple-format On The Waterfront Bluray (Criterion, 2.19) went up yesterday on Bluray.com. The praise is abundant — “simply fantastic…flawless contrast …overwhelmingly beautiful blacks and whites…absolutely no traces of problematic lab tinkering.” But he doesn’t summarize the content of “On the Aspect Ratio,” a six-minute essay that explains why Criterion went with three aspect ratios. One of their reasons, I’m fairly certain, was to placate people like me.

If you’re not like me (i.e., not invested in “boxy is beautiful” headroom), take a look at the above screen captures and explain to me how it’s better to chop Marlon Brando‘s knees off and to kill the smoggy sky above the peak roofs and chimneys in the background. There really, really has to be something wrong with you to say “yes, that’s good, cut off those knees and fuck the sky.”

The final big smackeroo of the 2013 Santa Barbara Film Festival was Roger Durling‘s on-stage encounter with guaranteed Best Actress Oscar winner Jennifer Lawrence. Durling is an open-hearted admirer of the 22 year-old actress and offered much effusive praise, but this tends to make Lawrence glaze over a bit. (What can you say when someone says you’re the greatest? “Yeah, I guess I am”?) But he was knowledgable and polite and gentle with her, and it was all to the good. 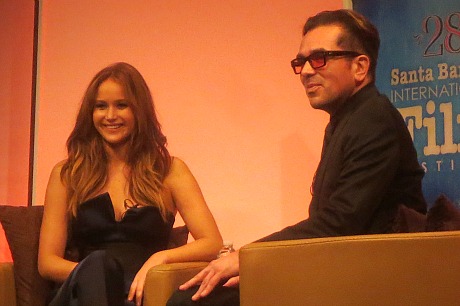 Lawrence spoke about how she likes to keep her acting fresh and instinctual. She doesn’t like to prepare too much and waits until the day of a scene to memorize her lines.

Her performance as Tiffany in Silver Linings Playbook shows she has great hot-flash instincts and loads of intense primal energy. But — let’ s be honest — this didn’t come through in a vivid and unmissable way until she hooked up with the mesmerizing David O. Russell.

Last night’s message, in short, is that Lawrence is a very fine actress, but only in the right film and under the right director is she wowser. Durling called her the bee’s knees. What he meant was “under Russell she was.”

She was tough and planted — a paragon of backwoods backbone — in Debra Granik‘s Winter’s Bone, and blazingly alive and vulnerable and sometimes gobsmack in SLP, but her other performances (The Beaver, Burning Plain, Like Crazy, X-Men) are just okay — agreeable, sufficient — by contrast.

The clips of Hunger Games that were shown last night reminded me what a lousy film it is, and what a painfully tedious director Gary Ross can be with average or sub-average material, especially when you compare Lawrence’s Katniss Everdeen with Tiffany and what Russell got from her.

For me, the best part of the tribute was a collection of clips (which Durling personally assembled) that showed how Lawrence is cut from the same cloth as Carole Lombard in My Man Godfrey, Claudette Colbert in It Happened One Night, Barbara Stanwyck in The Lady Eve and I forget who else. Everyone got it. Lawrence’s Tiffany belongs to a long tradition of spunk.

Watch this clip for Russell’s imitation of Robert De Niro‘s reaction to Lawrence after they performed their first scene together: 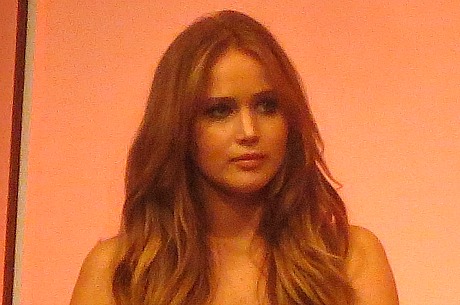 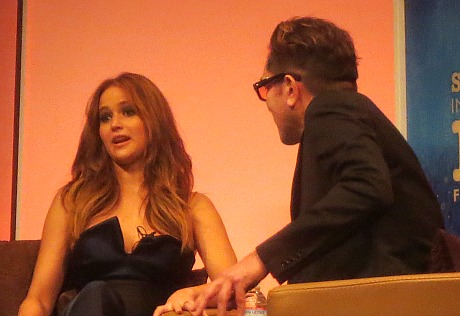 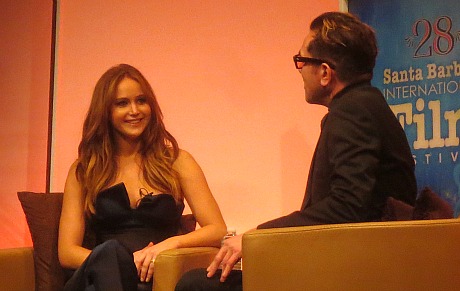