Here’s a one-hour BBC doc about Cannon Films, apparently lensed around ’87 or ’88…but it’s hard to tell. “I worked as a Cannon staff press-kit writer for much of ’86, all of ’87 and into early ’88, so I know whereof I speak,” I wrote in August 2010. “I know all about that operation and the mentality behind it. There were quality exceptions here and there (which I was very grateful for), but the films were mainly schlock. Which fostered a certain atmosphere among Cannon employees. ‘Fatalism mixed with humiliation resulting in gallows humor’ is one way to describe it.” 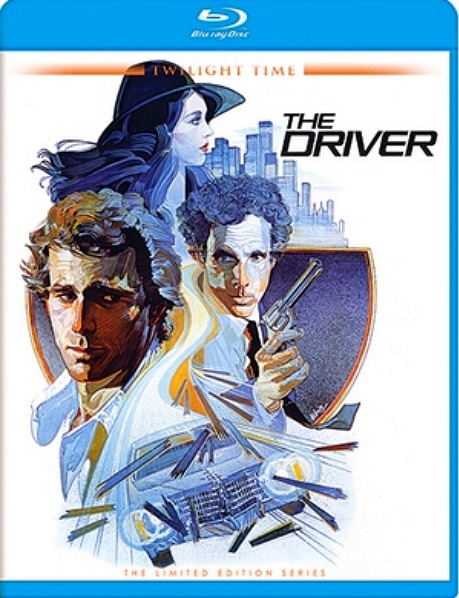 Unlike Slate‘s Dana Stevens, my objection to flip-flops has solely to do with the fact that many, many people out there (mostly men but a fair number of women also) have unappealing feet. I sit on subway cars and look at the toes of people who should never be barefoot except in their own bathrooms and even then, and I ask myself “whatever happened to the concept of sartorial shame?” Or “she thinks this makes her look attractive?” I was almost surprised yesterday when I sat across from a 20something sandal-wearing couple on the A train, and they both had feet that I regarded as tolerable if not moderately attractive — a very unusual occurence. 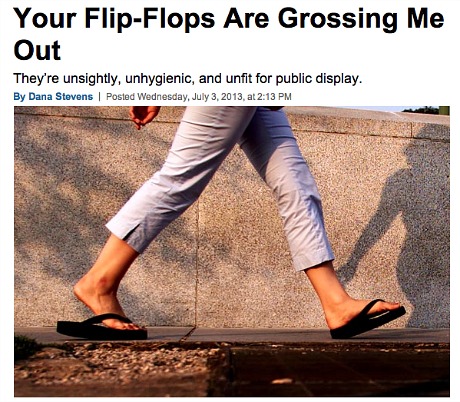 That said, I planted my flag on anti-flip-flop soil years ago. Glenn Kenny has tweeted that I’ll now be grateful to Stevens for validating my views on this topic. No offense (and I’m sure there’s none taken) but she’s a visitor and I’m an old resident. “This is my table, man. I own it.” — Paul Newman as Eddie Felson in The Hustler.

5 Comments
“No More,” She Said

Congrats to whomever cut and scored this trailer for Rob Epstein and Jeffrey Freidman‘s Lovelace (Radius-TWC, 8.9). Because it makes the film, a slow-downswirl tragedy that takes you down an icky and downish journey, seem a lot more engaging than it actually is. After catching it at last January’s Sundance Film Festival I filed it under “glad I saw it but if it had never been made I don’t think the universe would be any poorer or hungrier.”

So Alfonso Cuaron‘s Gravity, the 3D zero-gravity survival drama with Sandra Bullock and George Clooney, will open the 70th Venice Film Festival out of competition on Wednesday, 8.28. So the Warner Bros. release won’t play Telluride and most of us will be seeing it in Toronto.

Honestly — does this trailer indicates that Afternoon Delight is “about the sexual awakening of a woman in a sexless marriage,” as the Wiki synopsis says? To me the trailer suggests a tale about the near-torpedoing of a sexless marriage when the wife brings home a young pretty stripper. Oh, I get it — the “sexual awakening” refers to girl sex. I didn’t see this at Sundance; couldn’t fit it in.

When people get old and/or fat they trudge up stairs. If that’s how they need to play it, okay, but I must say it’s rather unpleasant to be stuck behind a trudger on the concrete steps of a New York subway station and being more or less forced to trudge along. It’s a bit more tiring that way and it certainly does something to your spirit to be made to feel like a mass-man. The only way to ascend staircases of any kind is to bound up them like an antelope. Or at the very least ascend quickly, two steps at a time. I tend to use the left side of the stairs for passing, of course, but that doesn’t work very well. Basically I just suck it in and deal with the trudgers as best I can, but I can at least mention the annoyance.

A Michael Fleming/Deadline story popped yesterday afternoon about Steven Spielberg and DreamWorks nabbing the rights to John Steinbeck‘s The Grapes of Wrath with an interest in basically remaking John Ford‘s classic 1940 adaptation. It was clearly stated that Spielberg won’t direct, just produce. 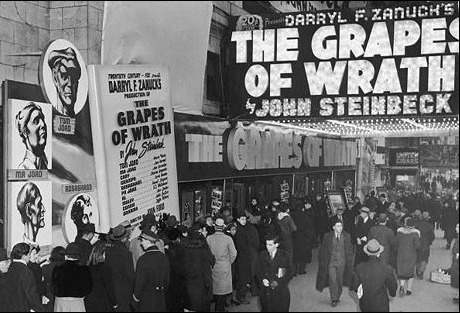 This struck me as odd as this is the kind of material Spielberg could rock his career with if he were to shoot this 21st Century Wrath in a plain, austere, dust-bowly vein with Dorothea Lange capturings and (a really huge IF) in a way that would simultaneously suppress his sentimental instincts.

Spielberg needs another Schindler’s List on his resume, something for the ages. He needs to direct a film with material that fits him as well as he fits it. He would do well to tap into his compassion for regular Joes and at the same time (a) pay tribute to Ford, a major career influence, and (b) demonstrate that he’s grown past his need to play his usual manipulative games. Spielberg-basher that I am, I believe that a Spielberg-directed The Grapes of Wrath could be (if he doesn’t fuck it up) a possibly phenomenal achievement.

“I don’t judge comedies by contemporary standards (i.e., you can do or say any finger-up-your-arse, simian-impulse thing that comes to mind and if it sticks to the wall, no matter how coarse or fuck-all flatulent or phlegmy, it’s funny) but by classic Billy Wilder standards, which is that it has to be carefully and honestly and realistically written according to the laws of commonly-perceived human behavior, and it has to hold water in terms of plot and motivation and character in the same way that any dead-straight drama (Death of a Salesman, A Lie of the Mind, A Moon for the Misbegotten) has to hold water.

“You can’t throw out the rule book because you’re making a ‘comedy.’ Comedies aren’t about escapes and time-outs — they’re about looking inward. Comedies aren’t that different from dramas — they’re just pitched differently and sprinkled with a kind of dust — and are much, much tougher to write and perform. Comedies need to be just as much about what people are facing in life — how they’re coping with loneliness and ambition and financial pressure and growing-up issues — as stage plays or dramas. They have to be real. They’re not excuses to light farts and flamboyantly goof off and just…whatever, go anywhere or try anything. — from a two-year-old HE review of Horrible Bosses.