In one fell swoop, The Lone Ranger producer Jerry Bruckheimer and costars Johnny Depp and Armie Hammer have boosted the reputation of film critics everywhere by giving them credit for having a lot more power than most people think. Variety‘s Stuart Oldham is reporting that the trio is blaming critics for the failure of The Lone Ranger by trashing it early on and coming down on their $250 million western with hammers and claws.

I read Michael Fleming‘s Deadline story about Steven Spielberg bailing on American Sniper. Four of the five basic w’s of journalism — Who, What, When and Where — are answered for the most part, but the Why feels threadbare. “Spielberg couldn’t square his vision of this movie with the budget,” Fleming writes. I wonder what really happened. Hasn’t Spielberg heard about smaller budgets having an upside because they lead to creative cost-cutting?

I’ve been moaning for years about the absence of a Bluray of Martin Ritt‘s Hud (’63). James Wong Howe‘s Oscar-winning black-and-white widescreen photography cries out for a high-def mastering. You can watch a high-def Hud via Amazon HD, and I’m sure I’ll eventually figure out how to install Amazon HD on my 55″ Vizio. But there’s something about owning a Bluray that trumps access to a high-def download. I want a Hud Bluray to have and to hold. Paramount Home Video put out a DVD about 10 years ago, but I presume they’ve since licensed the rights to Warner Home Video.

In June 2011 I was sent a copy of Diablo Cody‘s Lamb of God, which eventually became the now-completed film called Paradise (out 8.9 via Direct TV, theatrically on 10.18). “That Michael Fleming logline about the main character, who’s literally named Lamb, being a Christian who turns to stripping is incorrect,” I wrote. “It is, however, a moral tale about a Christian girl among the hapless heathens. The Vegas strip but no stripping, Cheetah Club, cash gifts, a dead fiance, a skin graft, Vicodins, etc. A well-written, sometimes sassy but more often plain-spoken drama about sins, values, generosity, growth.”

Alan Spencer‘s delivery reminds me a bit of the rat-a-tat-tat dialogue in The Social Network and His Girl Friday. I understand Spencer’s affection, but I wasn’t that much of an Eastwood fan in the early days. I wasn’t even a fan of his directing until Unforgiven. Okay, I respected Play Misty For Me and Breezy and maybe Pale Rider, but I wasn’t knocked out by them. Forget the orangutan movies. But everything changed after Unforgiven. From that point on I was on my knees.

My Bluray and DVDs represent my taste and appetites, of course, but primarily they’re a kind of refuge and watering hole for the soul — emotional foxholes that I’ve sunk into many, many times and am ready to sink into again whenever the mood strikes. I look at them and I feel proud and accomplished, and I love that I don’t keep them in alphabetical order. I had nothing to do with making them, of course, but at least I’ve reached a point in my life in which I can recognize and revel in “the best.” Much like a wine connoisseur who derives profound satisfaction from owning several dozen bottles of really good stuff, etc. 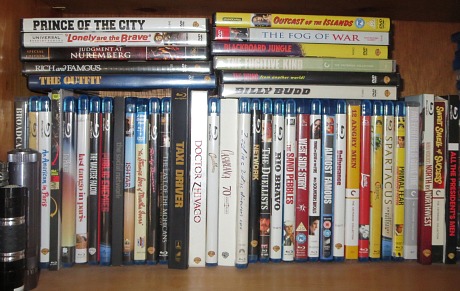 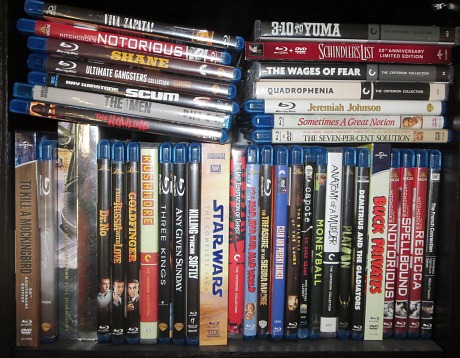 No Comments
Shot Across The Bow

On the same day that Peter Landesmann‘s Parkland opens stateside (9.20), an anti-Parkland book called “Reclaiming Parkland” will hit the stands. The author is JFK assassination-conspiracy authority, researcher and finger-pointer James DiEugenio. Parkland embraces the “Oswald did it alone” theology in Vincent Bugliosi‘s “Reclaiming History” and DiEugenio is a sworn opponent of this. The apparent result is that Parkland producers Tom Hanks and Gary Goetzman plus their failed attempt to make Bugliosi’s book into a miniseries will face scrutiny in his book. 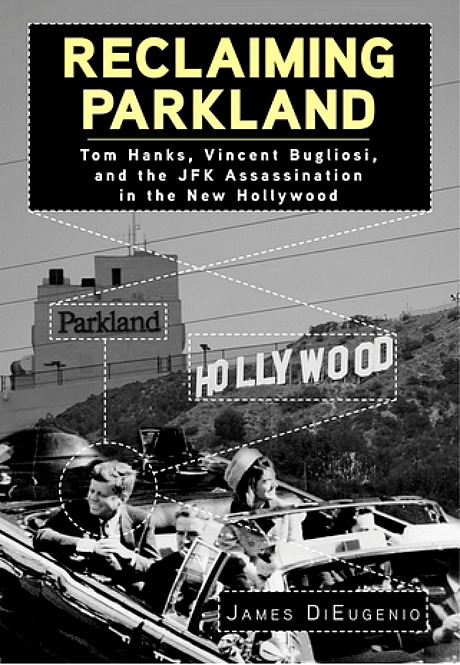 With Adam Sandler stooge-helmer Peter Segal (Tommy Boy, Anger Management, 50 First Dates, The Longest Yard) setting the tone and a flip, smart-ass script by Doug Ellin, Tim Kelleher and Rodney Rothman, Grudge Match (Warner Bros., 12.25) might be a half-tolerable comedy. Maybe. But you never know with these lowball enterprises which (let’s be honest) are aimed at Joe and Jane Popcorn from Paramus, New Jersey. You can bet that Grudge Match will be drenched in amyhdrous butter fat and covered with handfuls of salt. Alan Arkin as a trainer will be funny — you can tell that right off the top. Whose ex-wife or disapproving girlfriend will Kim Basinger play?

I was told today that three significant award-season films that are probably going to play the 2013 Telluride Film Festival — Alexander Payne‘s Nebraska, J.C. Chandor‘s All Is Lost and Joel and Ethan Coen‘s Inside Llewyn Davis — will not make the trek to the Toronto Film Festival, which starts just a few days after Telluride ends. Telluride films almost always go to Toronto so this is…well, it’s interesting.

I hope this information is wrong, or that the distributors of these films will think things over and change their minds. I saw all three at Cannes and suspect they’d all get a rousing reception at Toronto.

Seven years ago I ran a piece called “The Old Toronto Sidestep.” It was about a decision by Sony Pictures to not screen Ryan Murphy‘s Running With Scissors at the 2006 Toronto Film Festival. A week earlier I had written that Fox Searchlight had made the same decision about Nicholas Hytner‘s The History Boys.