Support on Patreon Follow @wellshwood
3 Comments
One Works, The Other Doesn’t

This two-month-old trailer for Sandra Nettelbeck‘s Last Love (formerly Mr. Morgan’s Last Love) feels classier and more elegant and generally more appealing than the trailer that was released on 9.27 (i.e., yesterday). For one thing the late July trailer admits that the film is set in a French-speaking city (pic was shot in Paris and Brussels) while the new version seems to be trying to obscure that fact. I haven’t seen Last Love (Image, 11.1), which costars Michael Caine, Clemence Poesy, Justin Kirk and Gillian Anderson. But I know that Nettelbeck knows what she’s doing. Mostly Martha (’01), which she also directed and wrote, is one of the most sensibly satisfying romantic films of this century.

I believe that Richard Curtis has done more to sugarcoat and suffocate the romantic comedy genre than any other director-writer I can think of. If there’s someone else who has injected his films and scripts with more mirth, fluttery-ness and forced euphoria, I’d like to know who that is. Curtis has no discernible interest in ground-level reality (as the way-above-Curtis’s-level David O. Russell does) . When writing romantic material he seems interested only in those levitational moments when an attractive man and a simple-but-dishy woman can finally let their true feelings out and look into each other’s eyes and….aaahhh! In my view anything with the Curtis stamp is an instant must-to-avoid.

I’m inclined to accept John Wells‘ explanation about why August: Osage County (Weinstein Co., 12.25) ends with a shot of Julia Roberts driving down an Oklahoma road in a pickup truck rather than on the isolation of Meryl Streep‘s sharp-tongued matriarch sitting at home with Eric Clapton, which is how the play version ended. In a 9.11.13 L.A. Times story Wells, the film’s director, told Steven Zeitchik that research audiences didn’t like the Streep ending and “were terrified about what happened to [Roberts’ character]…keeping it the way it was in the play was just too alienating to the people the film needed to appeal to,” Wells says. “I heard it over and over again — to the point that it was ‘Let’s see what happens if we put Violet on the steps and then cut to Barbara.’”

With the 50th anniversary of the JFK assassination approaching, expect a deluge of articles, books, documentaries (including a new four-hour American Experience examination premiering on PBS on 11.11 and 11.12) and even a theatrical re-release of Oliver Stone‘s JFK. Yesterday I watched a four-month-old Newseum discussion of the JFK murder by Robert MacNeil and Jim Lehrer, both of whom were in Dallas that day. Lehrer is openly contemptuous of Stone’s 1991 film, and I must say their refusal to give any credence to conspiracy theories seems a bit smug and stubborn. But they were notepad-and-shoe-leather reporters who were right there — McNeil may have obliviously spoken to Lee Harvey Oswald in the immediate aftermath of the shooting, he says — and doing their best to differentiate between the wheat and the chaff. Agree with them or not, but they exude a certain authority.

At 1:47 cinematographer Robert Surtees does a kind of stylized fourth-wall breakthrough. Instead of resorting to the usual rack focus after Anne Bancroft exits the frame, he manually slows the focus on Katherine Ross‘s face, taking three or four seconds to portray what’s happening in her head. A similar device is used in The Verdict when the camera stares two or three developing Polaroid snaps of a comatose woman in a hospital bed. As they become more and more recognizable, a metaphor for the emergence of conscience in Paul Newman‘s ambulance-chasing attorney is conveyed. Name other instances in which a camera or a cinematographer stopped being invisible (i.e., unobtrusively delivering images) and in so doing briefly interrupted the narrative flow to actually “speak” to the audience about an emotional or intellectual development of some sort.

If you’ve read about John Cassevetes‘ Shadows (’59) you know he shot it twice — once in ’57 and again in ’59. The Wiki page says that “the second version is the one Cassavetes favored,” and it’s clearly stated that the new Criterion Bluray is offering the ’59 version. And yet a DVD Beaver screen capture shows a Times Square cityscape that was probably shot in April or May of ’57. How do we know this? Pic shows the 1957 Dean Martin dud Ten Thousand Bedrooms (which opened on April 3, 1957) on the marquee of what I presume to be the marquee of Leow’s State (B’way and 45th). Movies had longer runs back in the day but Bedrooms was generally regarded as a mediocre film and was “not a success” and therefore almost certainly was gone within three or four weeks. Notice also that The Ten Commandments wqs still playing at the Criterion after opening there on 10.5.56, or a good six months earlier. 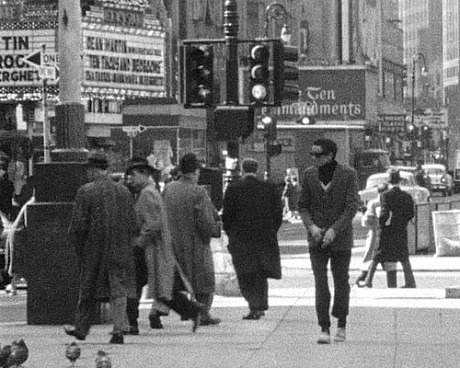 For a reason presumably known to Lars Von Trier but obscured to almost everyone else, the narration for this Nymphomaniac clip is a reciting of the first sentence from Edgar Allen Poe‘s “The Fall of the House of Usher.” This suggests that the film will be perverse or pretentious or maddeningly oblique. Or perhaps a combination of all three. “During the whole of a dull, dark, and soundless day in the autumn of the year, when the clouds hung oppressively low in the heavens, I had been passing alone, on horseback, through a singularly dreary tract of country; and at length found myself, as the shades of the evening drew on, within view of the melancholy House of Usher.”