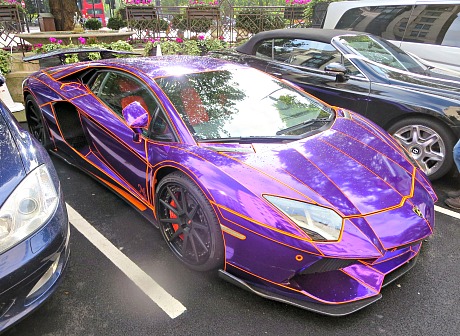 The ugliest Lamborghini in world history was parked outside the Dorchester this afternoon, obviously owned by someone filthy rich (some Middle-Eastern guy?) and clueless beyond belief. It has to be a guy — no woman would drive around in something like this. I’m also guessing that the style is borrowed from Joseph Kosinski‘s Tron. The guy who bought this car needs to have his wealth impounded and then it needs to be given to the poor.
(More…)
October 20, 2013 1:38 pmby Jeffrey Wells
24 Comments
Cool British Reptile

It’s good that Benedict Cumberbatch has been enjoying his big emergence moment since…what, Tinker Tailor Soldier Spy? My personal shorthand is that he’s the new lizard-eyed Richard Burton. Cumberbatch is planted and vivid and very “right now” but he does look like a brilliant fellow with rather cool blood in his veins. That’s not a putdown. It’s just something in his vibe and genes. The feeling of acute intelligence within him is quite fierce. I could be wrong but he’ll never be able to costar in anything dumb or downmarket. 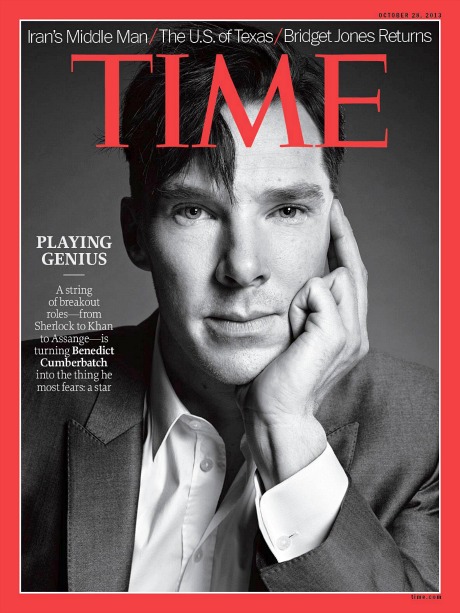 6 Comments
Disturbance In The Force

One morning about a week ago I started feeling a sense of something bad around the corner. I didn’t know what it was. I thought maybe my mother had suffered another stroke and taken a turn for the worse. (We’ve all heard stories about parents and wives sensing it when a son or husband has died or been hurt in a war zone.) Then I thought it might be girlfriend trouble, but I decided against that possibility. (Things are always in flux on that front.) Then I thought that my obese Siamese cat Mouse had been hit by a car — nope. All I knew was that something was causing this queasy-gut feeling. And then the day passed and the sun came up the next morning and the feeling went away. So much for premonitions, but for a while there I was sure something was up.

Nobody does cruelty and savagery like teenagers in high school. Especially those in their early to mid teens. I was thinking about this in the wake of Kimberley Peirce‘s Carrie, about a teenaged girl with exceptional powers being picked on by venal female classmates, and the recent suicide death of 14 year-old Rebecca Sedwick, the Floridian girl who jumped to her death after being bullied online about some inane matter. (Her taunters, one or two of whom are now being prosecuted, were apparently ragging on Sedwick because she had been seeing somebody’s ex-boyfriend.) I was also thinking back to the grief I went through in high school because I was “different” in my own way. What a joyful experience that was! I remember the taunting and the cruelty like it was yesterday.

A hero or good-guy protagonist is always more interesting if he has weaknesses or flaws of some kind. If you can portray a basically honorable fellow with problems or vulnerabilities, it always enriches the flavor of the character and the portrayal both…no? Which is why I was intrigued when I read about possibly erroneous assertions by Maersk Alabama crew members that the real-life Captain Richard Phillips, portrayed by Tom Hanks in Paul Greengrass‘s Captain Phillips, may have ignored or unwisely dismissed reports about Somalia pirate threats prior to the 2009 hijacking and hostage crisis.

It may be, as noted, that these allegations are untrue, but if I’d been in the shoes of Greengrass and screenwriter Billy Ray, I probably would have seized upon this material as it’s always more engaging when you have a slightly blemished, less-than-true-blue hero.

In a recent Reddit discussion Greengrass said he’s “confident that Captain Phillips did not take an irresponsible route along the coast of Somalia and ignore a specific warning, as alleged in the press. We spoke to every member of the Alabama crew bar one, all of the U.S. Military responders that played a leading role in these events, and thoroughly researched backgrounds of the four pirates and the issue of Somali piracy generally. And I’m 100% satisfied that the picture we present of these events in the film, including the role playing by Captain Phillips, is authentic.