It’s obvious that Robert Redford‘s role in this possibly tolerable Marvel film allows him to play it straight and modest and sensible and so on. He isn’t wearing spandex or a helmet or throwing lightning bolts out of his fingers. So all indications are that Captain America: Winter Solder is in no way, shape or form “Redford’s Norbit.” In a Best-Actor-race context, I mean.

I honestly feel that a reality series about Hollywood’s award-season blogger crowd — Awards Daily‘s Sasha Stone (the feminist-compassionate earth mama), Hollywood Reporter columnist/analyst Scott Feinberg (the tough-talking whippersnapper), Gold Derby‘s Tom O’Neil (the shoot-from-the-hip statistician), MCN’s David Poland (the chuckling, lecturing, eyebrow-raising know-it-all), Deadline‘s Pete Hammond (the tireless tapdancing political gadfly who files at 2 am), Indiewire‘s Anne Thompson (the seasoned, lightly-treading diplomat), Hitfix‘s Kris Tapley (the solemn and judgmental young guy who wants to bail on this racket in order to write screenplays), Vulture‘s Kyle Buchanan (the soft-spoken droll guy) and myself (the Last Honest Cowboy Hat — the most poetically-inclined, confessional-minded and intuitive, non-alcoholic poet-samurai truth-teller of them all) — would make for excellent viewing. I would watch it in a heartbeat. Seriously — are you going to tell me that other reality series (i.e., Fucked-Up, Soul-Poisoned Housewives of Suburban New Jersey) would be even half as interesting as a bunch of clever, eager-beaver neurotics (okay, semi-neurotics) hustling around Hollywood in their alligator shoes? The difference is that it would be entirely composed of edits from Google Glass captures. Everyone would have to wear these glasses 18/7. No video crews following everyone around…that’s old hat.

4 Comments
Seance on a Saturday Morning

Late this morning Awards Daily‘s Sasha Stone and I again discussed whether or not 12 years A Slave is an all-but-inevitable Best Picture winner due to the “pivotal moment in history” factor. We also kicked around The Counselor and the Nikki Finke-at-odds-with-Deadline management thing. Again, the mp3.

Now that Blue Is The Warmest Color has been seen by the Friday night crowd, is it “the first great love story of the 21st Century” or what? And are certain Oscar bloggers earning their hottest-place-in-hell points for dismissing Adele Exarchpoulos‘ world-class performance as a marginal also-ran? N.Y. Post critic Kyle Smith calls it “vulnerable, eager, curious, innocent and thirsty for experience…the opposite of Cate Blanchett’s mannered, tic-laden, strenuously actress-y performance in Blue Jasmine and, as such, it’s easily the most haunting work I’ve seen by an actress this year.” 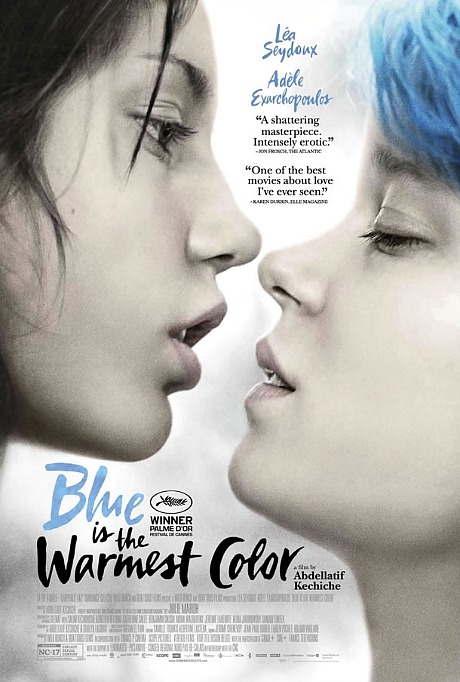 “I saw The Counselor at a theater in Silver Spring, Maryland,” writes Boxoffice.com‘s Phil Contrino. “The crowd was with the movie for most of the duration. I could tell they were genuinely wondering what would happen next and the soon-to-be infamous car scene with Cameron Diaz generated real laughs. But the film’s momentum died when it became crystal clear that a certain female character was not going to make it out alive. It reminded me of the reaction to Drive when I saw that with a paying audience. The crowd was with it right up to the point when Ryan Gosling punches Christina Hendricks.

“The lesson here is simple: women are driving the box office in a considerable way and they don’t want to see bad things happening to female characters. They are sick of the woman-as-victim, damsel-in-distress idea. They want to watch movies about strong women who overcome obstacles, and Hollywood would be wise to give them more of that instead of relying on tired story arcs that treat women as disposable secondary characters.”

“I’m glad yesterday’s Counselor post [i.e., “A Bleak, Indelible Beauty“] at the N.Y. Times gave you good copy,” F.X. Feeney wrote this morning. “I’m also especially delighted by the surging response by the commentators. ‘Merton’ catches me dead to rights about dismissing a whole genre. I didn’t mean to do that — I was just gnashing my teeth in a fit of lost temper over the way people are reacting to the uncompromising brilliance of The Counselor.

“One of the responders objected to the scene of Malkina (Cameron Diaz) in the Catholic confessional, saying it had no point. Actually, the sceene has a profound one [that is] touched upon in a throwaway line: “I never knew my parents. They were thrown out of a helicopter into the Atlantic Ocean when I was three.” There’s a lot of tragic history under that line. Because she is Argentine, it means her parents were desaparecidos (‘disappeared ones’) killed by the Junta in the 1970s, as part of their holocaust against their own citizens” (i.e., Argentine leftists). “Malkina is thus a literal orphan of history. As she’s not been allowed any ordinary connection to humanity, she has renounced being human (or tells herself she has) and elected to model herself after her beloved Cheetahs. ‘To see a quarry killed with elegance is very moving to me,’ as she says later. ‘It always was.’ In the deepest sense, she was killed with her parents.”

The day before yesterday I loaded OSX Mavericks on all four computers — the two 13″ Macbook Pros, the recently purchased 13″ Macbook Air and the slow-boat-to-China 2009 iMac that I barely use any more. (You need a backup or two in case of disaster.) You have to get with the new program immediately — no dawdling. I definitely like the newer version of Pages. I don’t know what else I like about it. I just like embracing the newest thing. The snake must shed its skin.

I think it’s hilarious that amiable Huffpost guy Ricky Camilleri asked 12 Years A Slave star Chiwetel Ejiofor how he and his fellow cast members had fun on the set. Whee! “There was a lot of love on the set, a lot of focus, a very high level of engagement,” Ejiofor answers, “but the fun was not on the set.” At an earlier point Camilleri laments that “even critics says it’s a masterpiece but Fox Searchlight may have difficulty marketing this because of the brutality” and says that it’s unfortunate that they’re even saying this. By the same light one could complain that Oscar watchers like myself aren’t showing the proper respect for Steve McQueen‘s film by nothing that a significant pushback response has manifested among the Academy rank and file. It’s very unfortunate that this has happened. There is only one valid response to a masterpiece, and this is to kneel down and absorb and be grateful for that communion. The sad reality is that many people are too egocentric for this. They sit there and go “yeah, yeah but what about what I want?”