I’ve finally seen Yuval Adler‘s Bethlehem, the winner of six Ophir awards (including Best Picture) as well as Israel’s Best Foreign Language Feature submission. It’s a lucid, tightly wound thriller that regards the Israeli-Palestinian conflict through a filter of double-agenting and family matters and betrayal and anxiety. And then turns it all into tragedy. Bethlehem is a stand-out. Required viewing and then some. The Academy’s foreign language committee would be foolish not to pay heed.

Last night Deadline‘s Anna Lisa Raya quoted American Hustle producer Richard Suckle, who attended Saturday afternoon’s Deadline Contenders event at the Wallis Annenberg Center for the Performing Arts in Beverly Hills, that David O. Russell’s film “was locked down today.” Which means that the visuals are finalized but that the music and mixing aren’t done yet. Five days from now (or on Friday, 11.8 at 9:30 pm) Russell will sit for an AFI Film Fest q & a tribute consisting of clips from Hustle as well as previous D.O.R. films. I’ve been told that Hustle won’t screen for press until 11.22 or thereabouts, but it seems a bit odd to have Russell do a big tease presentation inside the Egyptian and not give fans a special treat. But Russell can’t, I’m told. The film won’t be fine-tuned and screenable for another two weeks after the AFI thing. AFI programmers have no film due to screen after the Russell talk and this will be a Friday night so something could be screened…theoretically, I mean. It just won’t be American Hustle. 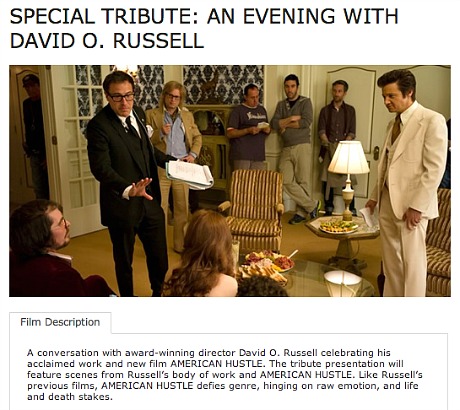 Before reading a piece called “Bresson Gone Bad” by FilmKrant‘s Adrian Martin, I had never contemplated that Only God Forgives director Nicholas Winding Refn might be some kind of watered-down or, more to the point, deranged aesthetic descendant of Robert Bresson…the thought!

“Refn is surely a curious case,” Martin writes. “He joins Carlos Reygadas and Gaspar Noe (whose Enter the Void is clearly the Big Brother of Only God Forgives) in a loose grouping of filmmakers who try to marry a certain contemplative or ascetic legacy, on one side — that means, especially, the legacy of Robert Bresson and, and in a slightly different vein, Jean-Pierre Melville — with lurid, sensational, decadent, violent content on the other side.” Wells insertion: Let’s not forget Heli‘s Amat Escalante!

2 Comments
Don’t Get Too Excited

Kerry Washington‘s Oprah imitation in last night’s opening SNL skit is/was, for me, the single best thing she’s ever done. That includes her supporting performance in The Last King of Scotland and especially her turn in the absolutely dreadful Django Unchained, which she actually lost points for appearing in.

Awards Daily‘s Sasha Stone has just advised me to be more vigilant in policing ugly comments on this site. Well, I do get rid of people who won’t stop with the personal insults or obnoxious scoldings, but I guess I need to ask again for a little more civility or at least for more effort in the parsing or shading or careful phrasing of sentences. I’ve been writing about the need to cut down on the piss-spray element for about five years. I would love it, believe me, if I could raise the intellectual water levels or at least attract some Cambridge don-like commenters who might….aahh, what’s the use? I’m a broken record on this topic. Things never change around here.

“Interesting, thoughtful, well-phrased opinions of any kind are eternally welcome here,” I wrote three or four years ago. “I believe in beauty, redemption, catharsis and the daily cleansing of the soul. I live for the highs of the mind — for the next nervy retort, impertinent crack, witty turn of phrase, turnaround idea or wicked joke. And I know — we all know — that blunt-gruff reactions and persistent ideological ranting works against the flow of such things. I will not permit the infinite array of reflections about life, movies and politics that could and should appear on Hollywood Elsewhere to be suppressed or pushed aside by the relentless hammerhead barking of a small cadre of ideological Mussolinis, tough guys and hardballers.”