Everybody loves Bruce Dern, but that’s beside the point when it comes to the Best Actor mosh-pit situation. Dern’s performance as the snarly, checked-out, beer-slurping Woody in Alexander Payne‘s Nebraska has an indelible something-or-other quality that may stick to industry ribs when they see it…or it won’t. But there’s a lot of competition out there so how can the friends-of-Bruce rally round and push him along so that at least he finishes fifth? Because from where I’m sitting the chances of Dern, winner of the 2013 Cannes Film Festival’s Best Actor prize, even being nominated don’t look all that great.

I really hope I’m wrong but if I am please tell me how. Have I posted this riff before? Maybe so but I need to go over it one more time because, you know, the nomination ballots have to be turned in no later than Sunday midnight. Kidding!

A couple of weeks ago I did a phoner with Motel Life star Stephen Dorff, who for my money gives one of the most touching performances of his life as a mentally challenged one-legged loser gimp. Alan and Gabriel Polsky‘s film (Front Row, 11.8) is a gentle lower-depths drama about a couple of brothers, Frank and Jerry Lee Flannagan (Emile Hirsch, Dorff), whose morose, hand-to-mouth life goes from bad to worse when Jerry Lee accidentally kills a kid with a hit-and-run. Dorff and I had a nice smooth chat — he’s one of those guys you can say anything to and he’ll bat it right back without skipping a beat. He gets the cosmic totality of things. Anyway, I edited and converted the Dorff file to mp3 and….I don’t what happened but it’s gone. This hasn’t happened in a long time, but I fucked up and I admit it.

Four or five days ago a Russian-subtitled trailer appeared for Jim Jarmusch‘s dryly perverse Only Lovers Left Alive (Sony Classics, sometime in 2014?), but so far no English-language version has popped up. I realize it won’t open in this country until sometime next year, but obviously a good trailer has been cut together and everyone’s digging it so why not issue a subtitle-free version? Where’s the harm? This is a very droll, no-laugh-funny vampire movie about middle-aged goth hipster musician types — a nocturnal lifestyle movie that Lou Reed would have loved. (Maybe Jarmusch showed it to him before he died?) After seeing it in Cannes I called it “a perfect William S. Burroughsian nocturnal hipster mood trip…I sank into it like heroin.” 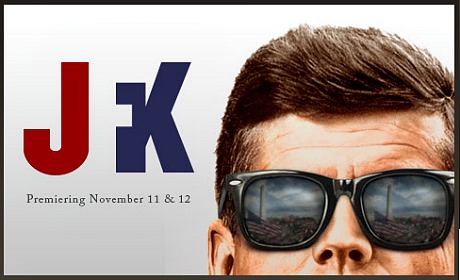 This is a catchy poster for John Wells and Tracy Lett‘s August: Osage County (Weinstein Co., 12.25). In the play it happens at the end of Act Two. In the film it’s somewhere around the halfway mark. Meryl Streep’s insults and rudeness get worse and worse until Julia Roberts loses it and leaps like a cat and the chairs go tumbling and the plates and silverware crash on the floor. 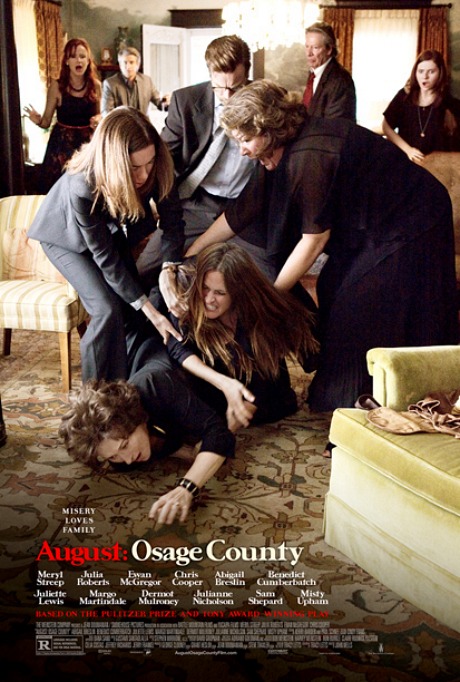 I wouldn’t listen again to Arcade Fire‘s “Afterlife” with a knife jammed in my ribs…not if I was driving through the desert and bored out of my skull…but stand-up cheers for the (curiously dark-haired) Greta Gerwig dancing and hopping around and baring her soul and keeping this video together for three minutes plus, “all on her own” so to speak. And it was shot live three nights ago! Phenomenal choreography, brilliant camerawork, inspired sets and lighting cues. The spell is broken when Arcade Fire band members make their entrance, but it’s still a very special piece. Hats off to director Spike Jonze.

38 Comments
I Forgive You, Sister

Since catching Stephen Frears and Steve Coogan‘s Philomena (Weinstein Co., 11.27) at the Toronto Film Festival I’ve been expressing how appalled I felt by a bizarre offer of forgiveness that the film ends with — a pass given to an obviously reprehensible old-crone nun who has brought considerable anguish into the lives of an elderly Irish mother and her late son. Why can’t I accept forgiveness in this instance? A Cardinal rule of drama is that the main characters (and particularly the main evil-doer) have to meet with some form of justice at the end, and yet Philomena Lee, the real-life mother played by Judi Dench, can’t shake off a feeling of loyalty to the Catholic Church plus she doesn’t want to live with anger. And so evil skates because old ladies need their serenity. 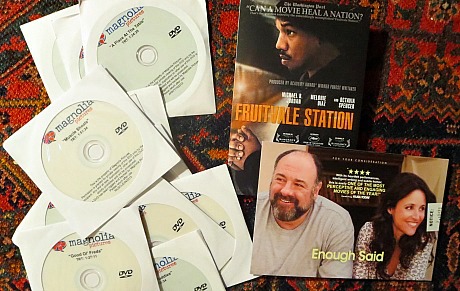