I landed in Salt Lake City at 6:45 pm, a shuttle dropped me off at the Park City condo around 8:30 pm, I unpacked my stuff and went right over to Fresh Market to stock up. At the checkout counter I ran into Indiewire critic Eric Kohn and five young critics (Carlos Aguilar, Robert Fowler, Mary Sollosi, Emma Myers, Kyle Burton) participating in a Sundance Institute Fellowship for Film Criticism and funded by the Roger Ebert Memorial Scholarship. (A sixth young critic wasn’t there.) The critics, chosen from roughly 400 applicants, are going to be reviewing films under Kohn’s guidance during the Sundance Film Festival as a kind of rough-and-tumble workshop. Tough deadlines, publicists, long ticket lines, party food, not much sleep, long hours…enjoy Sundance, guys! 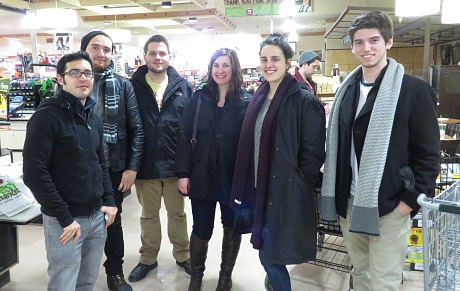 (l. to r.) Eric Kohn and five of the six participating critics (l. to r.): Carlos Aguilar, Robert Fowler, Mary Sollosi, Emma Myers, and Kyle Burton…although I’m not 100% sure of the sequence of the names because Kohn sent a needlessly complicated email stating that the names should be regarded counterclockwise. Who says “counterclockwise”?? Everybody says “left to right” when they send along captions.
January 15, 2014 10:44 pmby Jeffrey Wells
17 Comments
Before Leaving…

My Salt Lake City flight leaves in about three hours. No significant snow is expected in Park City for the next five days, which is disappointing. Maybe the lack of snow will cut down on the presence of skiiers on the city buses. Skiiing is great in and of itself but during the Sundance Film Festival there is nothing lower on the Park City social scale than skiiers. They sit on the buses like zombies, their eyes devoid of any apparent feeling or spark, and I sit across from them, not exactly filled with contempt but regarding them askance and muttering “one of the world’s greatest film festivals is going on right now and you’re here to ski?” Oh, and one other thing that I should have reported earlier but I only just read the report myself: Carol Rixey, the elderly proprietor of Park City’s Star Hotel who five years ago refused to honor my sentimental room reservation by leaving my cowboy hat at her establishment, passed away last May. She fell through a ceiling while repairing a floorboard in the attic of the hotel. Carol was 86. Condolences to her family and friends. I never blamed Carol for not only dismissing my cowboy-hat gesture but for becoming so alarmed by my articles about this misunderstanding that she gave my hat to the Park City police. Before this happened Carol treated me like family when I stayed at the Star in ’07 and ’08. She was kind and tough and never minced words.

Hat-tip to the Warner Home Video marketing guys for creating an original cover design for the forthcoming Bluray of William Friedkin‘s Sorcerer (4.22.14) rather than use the old 1977 one-sheet concepts. Original art is S.O.P. with Criterion Blurays, of course, but corporate marketers tend to succumb to boilerplate instincts. That awful jacket design for the recently released Bluray of Shane, for instance. 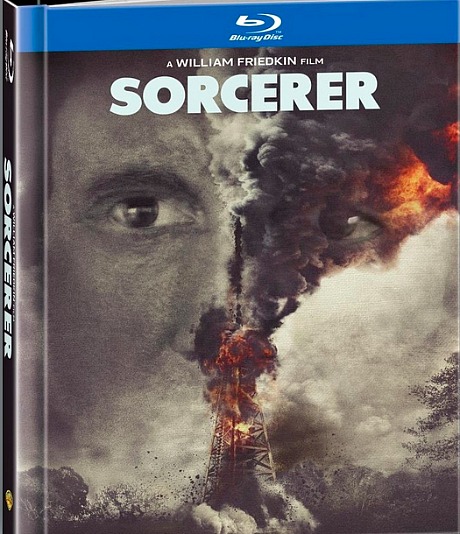 I’m supposed to know my old movies, and yet the instant I saw this photo I realized that not only had I never seen The Senator Was Indiscreet (1947) but until last night I’d never even heard of it. There are always good reasons why movies disappear and never return. I’m presuming that however pleasing it might have seemed to moviegoers in late 1947 and ’48, Senator probably plays like a creaky comedy of manners. Forget about today — it probably had no social resonance five or ten years after it opened. It is one of thousands of respected studio-era films that nobody (not even classic film buffs) gives a damn about today. History is always a merciless critic. Only the truly world-class, creme de la creme efforts are remembered a half-century later. Ask yourselves — among the nine or ten Best Picture contenders vying right now, which will be remembered in 2065? Trust me, only The Wolf of Wall Street, Inside Llewyn Davis and 12 Years A Slave. 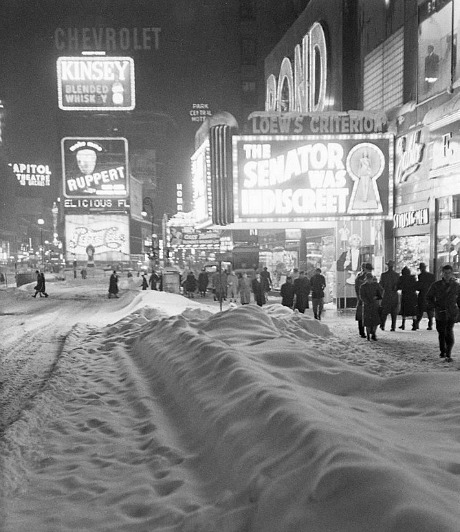 Presumably taken sometime in late December of 1947, or just after The Senator Was Indiscreet opened. George Sidney’s Cass Timberlane, another completely forgotten film that costarred Spencer Tracy and Lana Turner, was playing at Leows State.
(More…)
January 15, 2014 11:32 amby Jeffrey Wells
33 Comments
Anti-Banks Case Has Been Made

Scott Feinberg‘s 1.15 Hollywood Reporter piece about recent anti-Walt Disney Facebook postings by Abigail Disney (grandniece of Walt, grandaughter of Roy Disney) is moot as far as the Oscar fortunes of Saving Mr. Banks are concerned. The case has been made over and over that Banks is a corporate whitewash that pampers Disney’s reputation and cheers his decision to ignore the complaints of the joyless, brillo-haired scold P.L. Travers (Emma Thompson) in the creation of Mary Poppins (’64). The views of Academy members who’ve paid attention to these complaints and those who are committed to ignoring them in perpetuity are set in stone. Banks will probably be Best Picture-nominated and Thompson is a lock for Best Actress, but that’ll be the end of it. 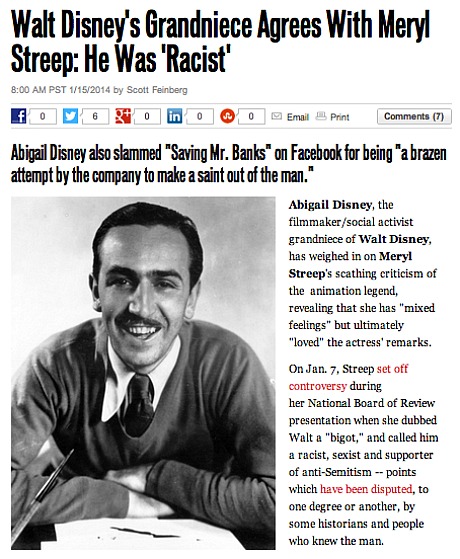 The Razzies were a moderately amusing concept in the ’80s and ’90s, but the world has moved on. One reason they’re barely paid attention to is that worst of the year lists are ubiquitous online during December and early January, and whatever limited interest might exist in this post-relevant annual event (which attracted moderate attention when good sport Sandra Bullock accepted her Worst Actress award in person in 2010) has all but dissipated by the time of the presentation, which is always right before the Oscars per the scheduling of founder John J.B. Wilson. But the main reason the Razzies are roadkill is that they only go after easy prey. Where is the pizazz in announcing that Grown Ups 2, a piece of Adam Sandler sequel sausage that no one cared about to begin with, has acquired eight Razzies noms? The other worst picture nominations were won by The Lone Ranger, A Madea Christmas, After Earth and Movie 43.