Filmmakers and audiences who believe that dramas are all about thud and glumness and heavy-osity and that comedies are all about froth and silliness and the sound of farts are really quite clueless. We can all be thankful that the late Harold Ramis was not among them. “I’ve always thought that comedy was just another dramatic expression,” he told Believermag‘s Eric Spitznagel in a curiously undated q & a. “I try to measure the amount of truth in a work rather than just looking at the generic distinction between comedy and drama. There’s a lot of bullshit drama out there that leaves you totally cold. And there’s a lot of wasted comedy time too. But when you get something honest, it doesn’t matter what label you give it. Look at a movie like Sideways, which is funny and still so painful. It points to the idea that life is full of ambiguity. Most people live somewhere on the spectrum of anxiety and depression.”

Roughly two weeks before the 20th Academy Award ceremony at the Shrine Auditorium on March 20, 1948, a Harper‘s article by Raymond Chandler appeared (or was filed) about the Oscars — the cultural legacy, Chandler’s belief in the artistic potential of films, his personal experience at a previous ceremony, etc. Chandler, on the verge of his 60th birthday, had co-written Double Indemnity with Billy Wilder five years previously; two years hence he would work unhappily with Alfred Hitchcock (i.e., “that fat bastard”) on Strangers on a Train. Here’s an excerpt: 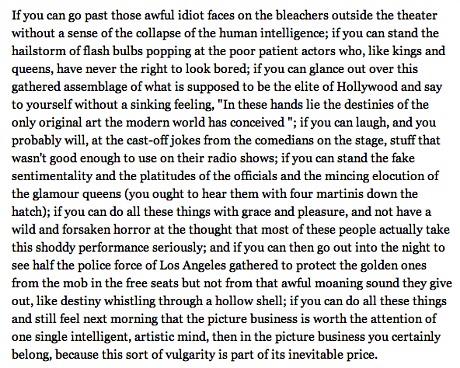 About 40% into the trailer Gyorgy Ligeti‘s 2001: A Space Odyssey music kicks in. (A little lazy, no?) The script openly references 1954 as the year when “something was unleashed” (or words to that effect), which of course is the year when the original Gojira opened in Japan. The seawater effects are the highlights, I think. So Mr. Godzilla attacks New York and San Francisco? Why not some smaller cities? Why not Savannah, New Orleans, Tampa or Portland? Why not Corpus Christi?

12 Comments
Meaning Of The Logo

Web/graphic designer Christian Annyas has today posted a visual history showing the evolution of the Warner Bros. logo over the last 90 years. The first Warner Bros. studio opened on Sunset Boulevard in 1918. But it wasn’t until 4.4.23 when Warner Brothers Pictures was formally incorporated. It’s ironic that 70 to 80 years ago Warner Bros. was known as the studio that specialized in tough, socially realistic movies (particularly in the 1930s about gangsters and underdogs and working-class characters). What is Warner Bros. known for today, for the most part? Aside from the Oscar-nominated Gravity and Her, it mainly churns out corporate superhero CG-driven fantasy-franchise films aimed at GenX and GenY submentals.

Ken Russsell‘s Women in Love (’69), indisputably his greatest film, can only be seen via a MGM Home Video DVD issued in 2003 and via occasional showings on TCM. There’s no Bluray, and no high-def streaming via Vudu, Netflix or Hulu Plus. There should be. The cinematography by Billy Williams (Gandhi, On Golden Pond) demands a meticulous high-def remastering. Women in Love is one of the most sensual films ever made about men, woman and relationships (and I’m not just talking about nude wrestling scene between Oliver Reed and Alan Bates), and one of the most anguished in portraying the sadnesses and frustrations that plague so many relationships and marriages. It’s also one of the first mainstream films to really explore and dramatize the lives and longings of free-spirited, semi-emancipated 20th Century women (i.e., Glenda Jackson‘s Isadora Duncan-like Gudrun and Jennie Linden‘s somewhat more conservative Ursula) in a historical context. 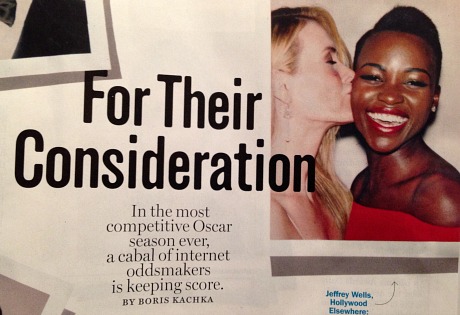 It seems that directors are largely against the idea of actors carrying umbrellas during rainstorm scenes. The reasons seem simple enough. It’s bothersome to frame an actor carrying an umbrella as the camera would have to shoot up from a slightly lower angle, and it’s difficult to light an actor carrying an umbrella without an artificial-looking glow. It strongly argues with reality, but that’s pretty much the Hollywood rule — no umbrellas unless it’s Alfred Hitchcock shooting the Amsterdam assassination scene in Foreign Correspondent. Carey Mulligan gets throughly soaked as she walks in the rain in An Education, but nobody is indifferent to this in real life. If I don’t have an umbrella I pull my jacket over my head or I cover my head with a newspaper, and I crouch down and run.