Until this morning I’d never laid eyes upon a photo of Stanley Kubrick and Marlon Brando together. Kubrick was signed to direct One-Eyed Jacks for Paramount Pictures in early ’59, which is presumably when this shot was taken. A year or so earlier Brando’s Pennebaker Productions had paid $40 grand for the rights to Charles Neider‘s “The Authentic Death of Hendry Jones.” Rod Serling‘s adapation was rejected, and then Sam Peckinpah wrote a version that was turned on 5.6.59. Brando fired Peckinpah and hired Calder Willingham to rewrite, and then Willingham and Kubrick were eventually let go. Guy Trosper (Birdman of Alcatraz, The Spy Who Came in From The Cold) became the new screenwriter and wound up with the chief screenwriting credit. 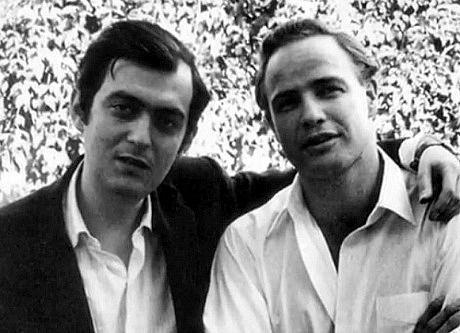 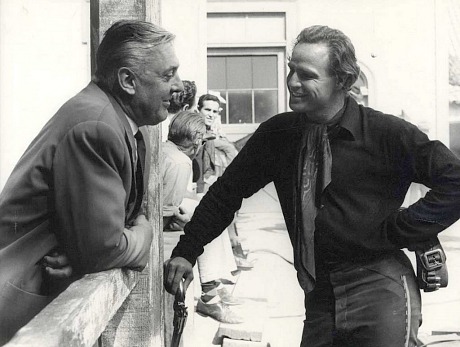 I don’t have to tell you Pompeii is bad. Everybody knows Pompeii is bad. It’s ludicrous, and that’s because mythical popcorn movies have all devolved into the same mindless, effects-driven gruel that even the schlockmeisters of the past (Dino De Laurentiis, Sir Lew Grade, Carlo Ponti) would refuse to touch if they were time-machined forward. Epic, escapist, large-scaled cinema has been engulfed and poisoned by the ComicCon virus (video-game and comic-book mythology, physics-defying fantasies), and submentals the world over are submitting to the historical visions of pulp-loving low-lifes like Zack Snyder (whose 300 I hated) and Steven DeKnight (the Spartacus series) and Pompeii‘s Paul W.S. Anderson (the poor man’s Snyder). Some of the “fans” (i.e., the ones who watch this crap ironically) obviously know that the video-game vistas and blatantly fake-looking CG compositions are unfit to watch and that the cliched, braindead dialogue is unfit to listen to, and yet everyone is nodding out and munching away in the multiplexes as if that’s the way it’s supposed to be. We all know things are bad — worse than bad. They’re crazy. It’s like everything everywhere is going crazy. 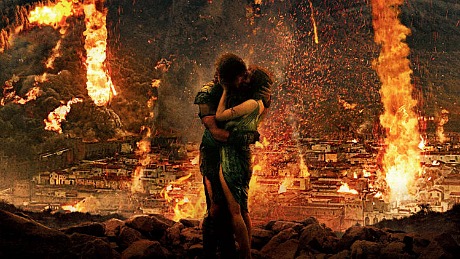 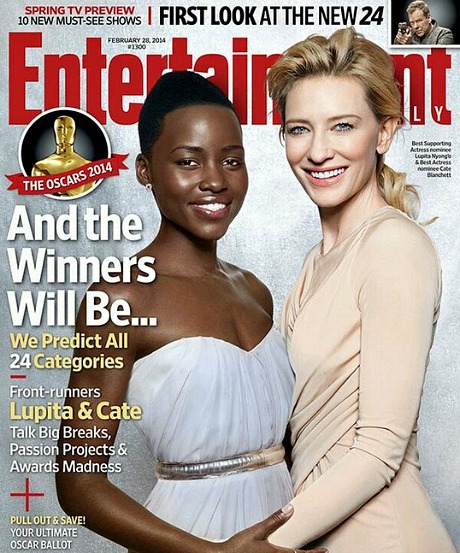 This June Squibb bit on Jimmy Kimmel…what’s the difference? Twelve hours, 18 hours …as long as you’re not a full 24 hours late. That’s where I draw the line.

A 2.21 NPR report briefly explores how people tend to place more stock in artists who behave eccentrically than those who do not. “Part of the reason people love Lady Gaga and Vincent Van Gogh is that these are very eccentric artists,” the copy reads. It follows that “people [tend to harbor] strong, unconscious stereotypes that eccentric artists are better.” 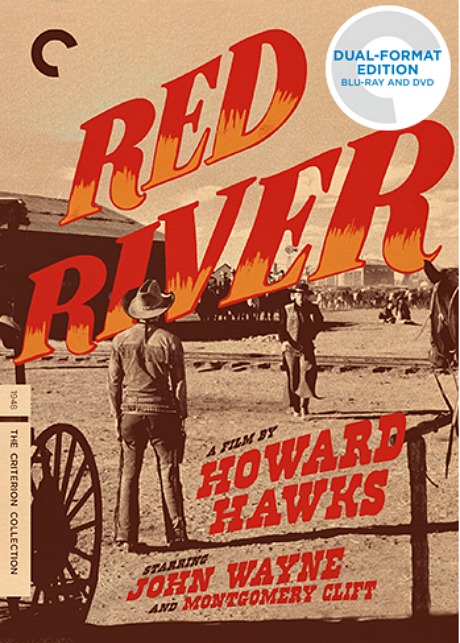 The one-sheet for the forthcoming Godzilla (Warner Bros., 5.14) has a nice inferno-ish quality. Molten lava, blast furnace, etc. A colorful descendant of the black-and-white cityscapes of Tokyo aflame in the original Gojira. The movie, of course, will almost certainly be sludge. At last summer’s ComicCon director Gareth Edwards said that his Godzilla “will be portrayed [more] as an anti-hero rather than a villain,” adding that the beast “is a representation of the wrath of nature…we’ve taken it very seriously and the theme is man versus nature and Godzilla is certainly the nature side of it. You can’t win that fight. Nature’s always going to win and that’s what the subtext of our movie is about. He’s the punishment we deserve.” 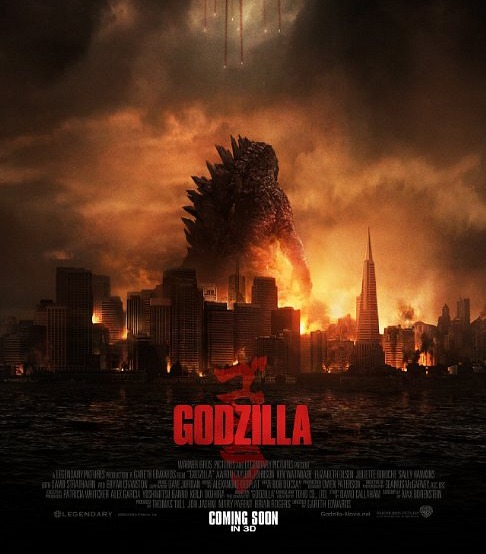 I don’t know what city is going to be attacked within the film (looks like San Francisco), but principal photography began last March in Vancouver, and then things moved to Honolulu in late June. Principal photography wrapped on the weekend of 7.13/14.

I am committed to catching a 12:10 pm 3D screening of Pompeii at West Hollywood’s Grove plex. I am a lamb going to slaughter. With a Rotten Tomatoes rating of 31%, Pompeii almost certainly sucks ass. And yet RogerEbert.com’s Glenn Kenny, of all people, has given it half a pass. “The action scenes are choice, and once the clouds of ash and shooting fire and churning seas start up, Pompeii achieves a momentum that most sensationalist studio fare can’t touch.” I am determined to hate on this film, but whenever I see something with a pre-determined prejudice, I always notice one or two things that I like and I come out shrugging and going “Aaahh, didn’t blow as badly as I expected.”

Not only is TheWrap critic Inkoo Kang dead wrong in stating that the conclusion of Hany Abu-Assad‘s Omar (Adopt, opening today in N.Y. and L.A.) is “weak” and “strangely numbing” and “a tacky resolution.” She’s so dead wrong that I’ve decided that henceforth she needs to be regarded askance. (There’s a difference between having a distinct opinion and apparently missing what other sensible, informed critics have observed.) Salon‘s trustworthy Andrew O’Hehir has described Omar‘s finale as “a shocking final explosion that seems inevitable in retrospect.” And N.Y. Times critic A.O. Scott has declared that “the film’s final scene feels shocking and abrupt, but also chillingly inevitable, consistent with the logic of a situation that defies all reason.” 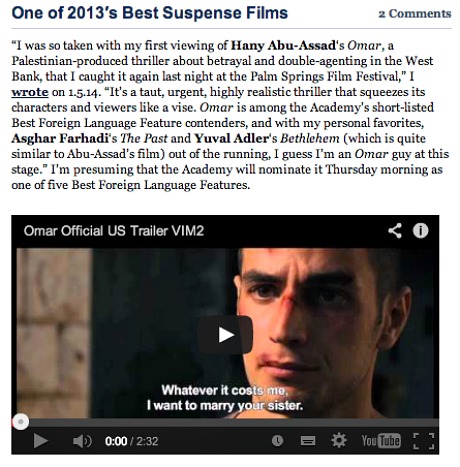 If you’re shooting a scene on rural railroad tracks, you need to do two things. One, you need to contact local railroad authorities and make double-sure about which trains will be coming along at exactly what time. And two, you need at least two production assistants with walkie-talkies to be watching several hundred yards away in both directions in case a rogue train shows up unexpectedly. If you haven’t done both these things, it’s your own damn fault if something goes wrong. Another sensible idea: if you’re shooting with a bed on the train tracks and you suddenly realize that a rogue train will be roaring through in a minute or less, you get the hell out of there. Forget about the bed and run like hell or jump off the railroad trestle bridge…simple.

“Actors have been lashing out against their profession and its grip on their public images since at least Marlon Brando,” James Franco remarks in a 2.19 N.Y. Times Op-Ed. “Brando’s performances revolutionized American acting precisely because he didn’t seem to be ‘performing,’ in the sense that he wasn’t putting something on as much as he was being,” he states. This is precisely what Brando seems to be doing during this lightly absurd 1965 press conference for Bernhard Wicki‘s Morituri, a World War II thriller made during Brando’s ten-year stinker phase (which wouldn’t end until The Godfather). Brando has obviously decided not to sell but to “be.”

“An Oscar Voter Spills Secrets on Woodygate, Wolfgate, and Awards Scandals” by Daily Beast contributor Michael Musto. Subhead: “There are 6,000 Academy Awards voters, but there’s only one who really counts — the one willing to talk to us about Woody Allen, American Hustle and all the Oscar smear campaigns.”