A pair of films about compulsive gamblers are currently shooting — Missisippi Grind and The Gambler. Both are remakes of a pair of renowned gambling films released in 1974, and both are looking at early 2015 release dates. Ryan Fleck and Anna Boden‘s Grind is a loose re-imagining of Robert Altman‘s California Split, and it costars Ryan Reynolds and Ben Mendelsohn, possibly in the roles played by George Segal and Elliot Gould in the Altman film. Rupert Wyatt‘s The Gambler, a remake of Karel Reisz and James Toback‘s The Gambler, stars Mark Wahlberg as James Caan, Brie Larson as Lauren Hutton, John Goodman as Paul Sorvino and Jessica Lange as Wahlberg’s mom. Toback’s largely autobiographical Gambler script for the ’74 version has been rewritten by William Monahan (The Departed). It partly adheres to the original and partly not. Toback is an executive producer of the remake but has no creative input. But he has a certain level of input in Mississippi Grind — he recently performed a cameo in which he belted Mendelsohn. Grind also stars Sienna Miller, Analeigh Tipton and Alfre Woodard.

“So let’s say — just as a hypothetical for instance — you are an 81-year-old star whose last movie was in 1991 and who hasn’t been to the Oscars in many a long year. Not that you were ever nominated for one in the first place; you were, after all, a sex symbol for most of your career. As the evening approaches, the anxiety sets in. Harsh lights, you think. High-definition cameras. And a public that remembers you chiefly as the ice goddess whose beauty once drove James Stewart to the brink of madness. 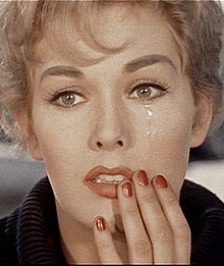 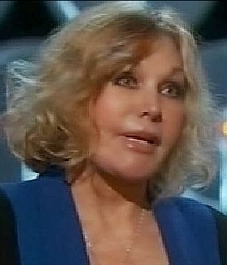 I don’t blame Kim Novak — I blame the plastic surgeon. He (no woman would do this to another woman) should be brought up on charges. I honestly felt that her face looked a little bit like John Merrick’s. I’m sorry but I felt humiliated for her.

“And even back then, when you were 25 years old, you worried constantly that no matter how you looked, it wasn’t good enough.

Paddy Chayefsky‘s The Americanization of Emily (’64) is about as intelligent and savvy as an adult political satire can get. (I’ve always loved the phrase “positively clanking with moral fervor.”) It’s nowhere near the class of The Hospital or Network or even Altered States. Too much speechifying. And there’s no way an anti-war Naval officer like James Garner‘s Charlie Madison would exist in the middle of World War II, even as a London-based “dog robber.” His philosophy is pure mid ’60s. But I love ’60s black-and-white films, and so I’d buy the forthcoming Warner Archive Bluray in a second. But I’ve already bought Vudu’s HDX version, and I can’t imagine it looking any better.

4 Comments
She’s Not There

Arie Posin‘s The Face of Love (IFC Films, 3.7) is a mostly mediocre love story. The performances aren’t half bad and at times touch bottom or are good for a chuckle, but the ghastly, on-the-nose script (by Posin and Matthew McDuffe) sucks the oxygen out of the room. The film is basically about how a well-off 50ish widow named Nikki (Annette Bening) poisons a promising relationship with Tom (Ed Harris), a nice, middle-aged artist, by lying her ass off. She’s attracted to Tom because he’s an absolute dead ringer for her deceased husband, Garrett (also played by Harris), who drowned five years ago. But instead of copping to that simple fact, she lies and lies and lies and lies all through the film. The only reason Nikki/Bening gradually opens up is because she’s forced to. Needless to add she’s a total drag to hang with.

Grantland‘s Mark Harris has ripped into yours truly in a 3.3 piece about the Oscars. In paragraph #8, to be precise. [See below] So here are replies to some of his assertions, which, summed up, basically pat the Academy on the back for a job relatively well done. Not perfectly (in part because they gave their Best Supporting Oscar to Dallas Buyer’s Club‘s Jared Leto, whose performance didn’t ring Harris’s bell) but good enough. 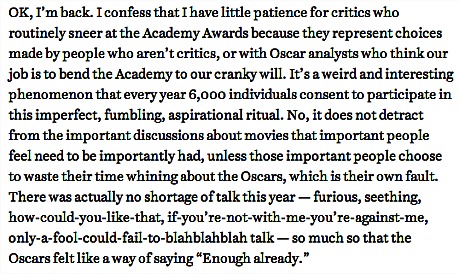 Harris statement #1: “Academy voters turned to a tough, sad, hard film about our own bad past made by a black Englishman and said, ‘This was the best of the year.’

Wells response: No, they didn’t do that, Mark. A relatively small portion of the membership did. Probably a third or a bit less. Nobody will ever know the exact percentage but this was almost certainly no landslide. Harris knows full well there was a very strong concern among many award-season pundits that quite a few Academy members either didn’t like 12 Years A Slave enough to vote for it or hadn’t even popped the screener in (or had skipped through the brutal parts if they had). I’m certain that Harris also suspects, like everyone else, that 12 years A Slave barely squeaked through to a win, and that if the Best Picture race had been a mano e mano between Slave and Gravity, the Academy would have definitely given the Best Picture prize to Alfonso Cuaron‘s space ride. Dollars to donuts Steve McQueen‘s film was saved because the anti-Slave vote split between Gravity, American Hustle and to a lesser extent Philomena.

Ask anyone on the street and he/she will tell you that the real-life character played by Chiwetel Ejiofor in 12 Years A Slave was named Solomon Northup. They’ll also tell you his last name wasn’t spelled Northrop or Northrup. Yesterday this fact was emphasized by yesterday’s New York Times correction about a story about Northup’s forced enslavement that was published 161 years ago, to wit: “An article on Jan. 20, 1853, recounting the story of Solomon Northup, whose memoir ‘12 Years a Slave‘ became a movie 160 years later that won the Best Picture Oscar at the 86th Academy Awards on Sunday night, misspelled his surname as Northrop. And the headline misspelled it as Northrup.” As President Kennedy reminded on 4.27.61, “An error does not become a mistake until you refuse to correct it.” 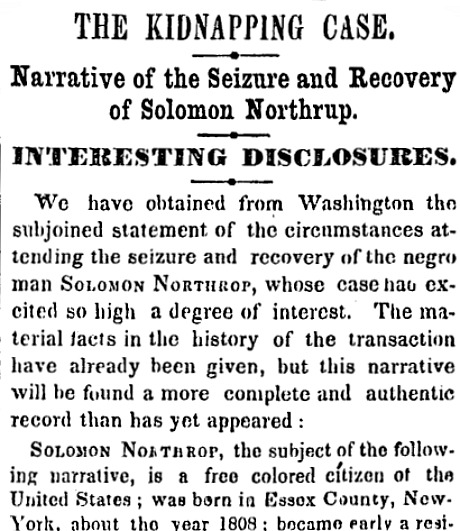