The trailer assures that Will Gluck, Jay-Z and Will Smith‘s Annie (Sony, 12.19) is a spunky musical-comedy by way of Manhattan wealth porn. Aimed at the squares, yes, but I like the vibe. (Or I’m in the mood for it after the sturm und drang of the just-finished Oscar season.) If Annie turns out to be half-decent you know Quvenzhane Wallis is going to be Best Actress-nominated…bank on it, Michael Musto! Jamie Foxx as Benjamin Stacks, i.e., a Daddy Warbucks for our time. Cameron Diaz as “the cruel owner of the orphanage where Annie resides”…a Dickensian orphanage in 2014 Harlem run by a neurotic white lady? Rose Byrne and Bobby Cannavale costarring. The screenplay is by Gluck, Aline Brosh McKenna and Emma Thompson. (Yes, the actress.)

L.A. Times reporter John Horn wrote yesterday that he’s recently spoken with “two Oscar voters [who have] privately admitted that they didn’t see 12 Years a Slave, thinking it would be upsetting…but they said they voted for it anyway because, given the film’s social relevance, they felt obligated to do so.” The morning after the Oscars I wrote the following: “[Academy voters] felt in the end that they had to go with a film that mattered, that said something, that was strong of heart. But I’ll bet a lot of people just voted for it without having seen it. They trusted, based on the strong Slave passions they’d heard or read about, that they were doing the right thing.” How representative of the Academy voters are Horn’s two sources? Two blades of grass usually suggests there’s at least a patch nearby.

Aaahh, to be a wandering American journalist in Eastern Europe in the early ’30s, running short on cash and optimism, and then to suddenly luck into a job at an English-language daily called the Trans-Alpine Yodel. And to be charged each day with reporting the occasionally threatening news of the day, to work in a large newsroom filled with the clatter of Olivetti and Underwood typewriters, to crack wise with the constantly-smoking and occasionally booze-sipping staffers and printing-press guys…what a life, never to be lived, only dreamt of. 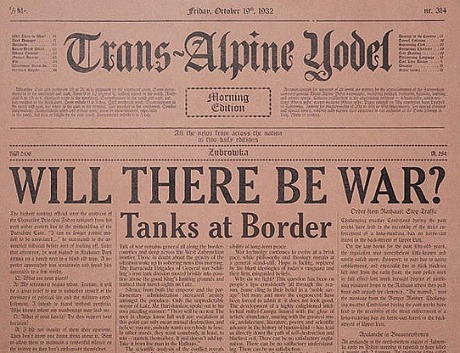 9 Comments
Missed It At Sundance

“Writer-director Steven Knight’s Locke (A24, 4.25) is basically just Tom Hardy driving a car while making a bunch of phone calls, and yet this ingeniously executed study in cinematic minimalism has depth, beauty and poise. A finely tuned showcase for Hardy’s exceptional acting skills, Bluetooth-enabled dashboard displays and the dynamic range of the Red Epic camera, the pic tracks a dark night of the soul for a construction-site manager en route from Birmingham to London.” — from Leslie Felperin‘s 9.2.13 Venice Film Festival review in Variety. 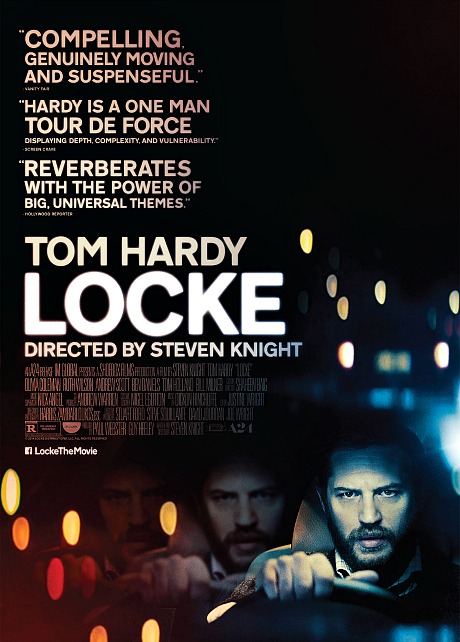 Last weekend the Spirit Awards gang should have handed a special indie passion trophy last weekend to Jeff Lipsky‘s Adopt Films. The New York-based outfit is distributing two admired but markedly similar West Bank thrillers — Yuval Adler‘s Bethlehem (opening 3.7) and Hany Abu-Assad‘s Oscar-nominated Omar. Lucid, taut and suspenseful, they both regard the Israeli-Palestinian conflict through a filter of double-agenting, family ties, anxiety and betrayal. And they both end in a sudden burst of violence. You have to see them both. They don’t compete with each other as much as form a greater sum.

Remaking West Side Story for the screen is a bad enough idea on its own. The original Oscar-winning 1961 original is easily accessible, and with more and more of the viewing today happening on big-screen TVs who needs to see a new musical version in a megaplex when the old one will more or less suffice? And is the world clamoring for a Stephen Sondheim-Leonard Bernstein musical version of Baz Luhrman‘s Romeo + Juliet (’96)? True, the ’61 version seems stiff and lacquered and overly theatrical by today’s standards. The challenge, I suppose, would be to make a version that feels a bit looser and more “street” verite, and set it against a real-life culture where gang warfare, turf battles and racial animosity are regular facts of life. But of all the directors in all the world who could possibly pull this off without causing major embarassment or nausea, Steven Spielberg would have to be at the bottom of the list. Helming a new West Side Story would arouse every treacly, gooey, sentimental impulse in his system. The result would be a disaster. And yet Deadline‘s Michael Fleming is reporting that a Spielberg West Side Story is an actual possibility if DreamWorks’ Stacey Snider winds up taking the reins at 20th Century Fox.

I’ve seen Wes Anderson‘s The Grand Budapest Hotel (Fox Searchlight, 3.7) twice now. (Here’s the rave review I filed from Berlin.) I’d love to see it a third time at tonight’s special members-only screening at Santa Monica’s Aero but I’m told there are no seats. I should have attended Monday’s screening of Rushmore, and in the bargain said hello to Matt Zoller Seitz, who’s been making the rounds to promote “The Wes Anderson Collection,” a four-and-a-half-pound, 336-page tribute & evaluation book. I’m hoping to lay my hands on a copy tomorrow or the next day.

Scott Johnson has posted a 3.4 Hollywood Reporter piece about the decisions and circumstances that led to the violent death of Midnight Rider camera assistant Sarah Jones on 2.20. It places the blame squarely on the apparent recklessness of director Randall Miller. No permission from the railroad, no medic, no production coordinator, no safety instructions, no nothing. Miller decided to cut corners and roll the dice so he could get his dream-sequence shot with a bed on the train tracks, and then suddenly the death train was approaching at 60 mph. And now Miller is the new John Landis. 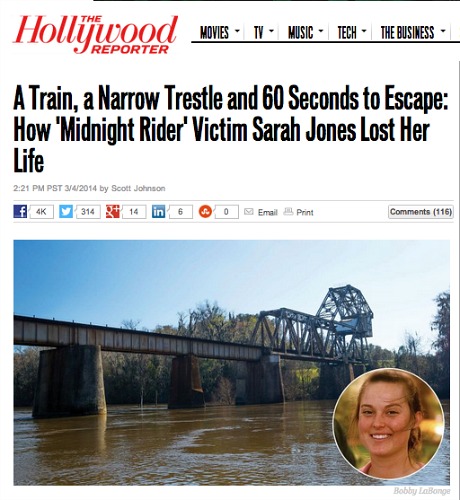 Johnson doesn’t discuss the two most obvious precautions which were also apparently ignored (which I brought up in my 2.20 piece about the tragedy, called “Railroad Chicken“) — i.e., failing to obtain a reliable estimate of when trains would be expected to pass, and failing to place two production assistants with cellphones or long-range walkie-talkies a couple of miles in either direction to give early warning about rogue trains.

My first reaction when I first heard about Jones’ death was “why didn’t she just drop everything and jump off the bridge into the Altamaha River?” That’s what I would have done, no question. To hell with the equipment. I would simply gone over the railing, Butch & Sundance-style.