People have always been appalled that Michael Bay‘s Platinum Dunes Productions wants to remake Alfred Hitchcock‘s The Birds. They were appalled by the notion when Variety first reported it six and a half years ago, and they’re probably equally appalled by today’s announcement, which basically states the same intention except with Diederik Van Rooijen to direct and Peter Guber‘s Mandalay Pictures partnered to produce with Bay’s company. 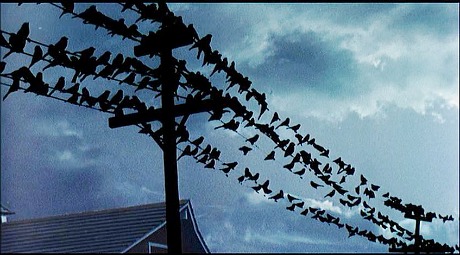 Keep in mind what I wrote back in October 2007: “People have forgotten (or don’t want to acknowledge) what a stiff, stilted and unnatural film Hitchcock’s The Birds really is. The first 30 to 40 minutes are pretty close to horrible. The child actors are detestable. It only takes off with the swallow attack on the house, Jessica Tandy‘s discovery of the farmer with the pecked-out eyes, the attack on the school, the legendary cafe scene (‘It’s the end of the world!’) and then the attic attack on Hedren. In short, it really could stand a remake, or some kind of ‘reimagining.'”

You can tell right away that director Tate Taylor (The Help) has made Get On Up (Universal, 8.1.14), a biopic about the legendary soul-and-blues singer James Brown, into a glossy, Hollywood-type, mainstream-friendly package. It would also seem that Chadwick Boseman (42) is too tall, too good-looking, too light-skinned and too smooth and mellow of voice to convincingly “be” Brown, who was shorter and darker with a rapscallion manner and a voice that had a raspy, rough gravel quality and was somewhat higher-pitched. It’s not “wrong” for this film to have softened Brown in the way that Dustin Hoffman softened Lenny Bruce in Bob Fosse‘s Lenny (’74), but…well, it’s early yet.

The trailer summary says Don Draper (Jon Hamm) was booted out of Sterling Cooper & Partners at the end of season #6. I thought he’d been forced to take a leave of absence but hadn’t actually been kicked to the curb. I never liked Draper. He’s a cold, angry, closed-off dick — always vaguely pissed or clenched up about something. Always lying. And his lack of social skills are sometimes breathtaking. Never, ever discuss your skanky personal secrets at the office…God! So season #7 is going to happen in 1969 and possibly ’70?

38 Comments
Scarborough Would Be Best Loser

Salon‘s Alex Pareene and Talking Points Memo‘s Tom Kludt are both pooh-poohing the notion of Morning Joe host, author and former Congressman Joe Scarborough looking like a reasonably promising candidate for the 2016 Republican Presidential Nomination. Pareene is saying that the conservative-minded MSNBC talkshow host is (a) not well known enough and (b) not crazy enough for the Republican nutters. But with Gov. Chris Christie suffering a thousand-cut death and most likely out of the race, Scarborough seems like the only guy around who could mount a substantial and engaging challenge to presumptive Democratic nominee Hillary Clinton. Scarborough is blustery at times but it’s hard to imagine that he’d be anywhere near as gaffe-prone as Mitt Romney was, and he’d surely be more appealing to country-club Republicans, independents and undecideds than a whacko like Rand Paul, who is absolutely guaranteed to lose. Scarborough, at least, would lose by a closer margin. I for one would like to see him win the Republican nomination. It would make a more civil and engaging contest of ideas and character. You know all the dumbfuck rural uglies will come out of the woodwork if Paul wins the nomination. 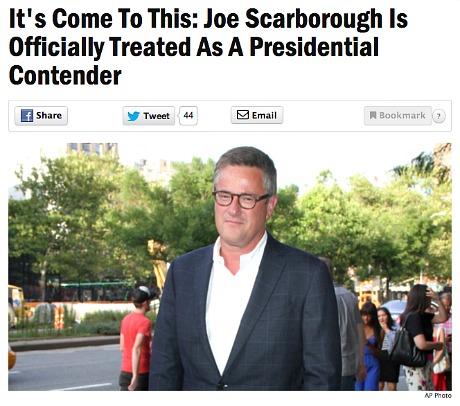 Sasha Stone‘s just-posted article, “Where The Oscars Go When Television Starts To Lead,” is well worth reading. It basically (a) acknowledges the steady, gradual drift of quality-level talent (especially writers) away from theatrical and over to cable television while (b) urging that the Academy needs to start giving a special annual Oscar to the Best Effects-Driven Film — “a separate category for the kinds of films they don’t like to award for Best Picture, the same way they’ve done for Foreign Language film and Animated Feature.”

Excerpt #1: “American film is moving away from good, quality storytelling and towards branded tent poles. This started during my childhood with the advent of the blockbuster. Now we’re actually rebooting Star Wars via JJ Abrams. Movies as video games, movies as amusement park rides, movies as familiar, comforting, non-challenging entertainment. Tent poles — get used to them. Get used to every beloved director being hired to make one. Branded tent poles are power in Hollywood. Directors can do those and then turn around and make what they want.”

This morning Carl Swanson‘s Vulture interview with Nymphomaniac star Charlotte Gainsbourg appeared. She’s been acting since the mid ’80s, but I’ve been paying close attention for only a bit more than a decade, or since she costarred in Alejandro Gonzalez Inarritu‘s 20 Grams. She costarred in Todd Haynes‘ I’m Not There and has been, of course, in two other Lars Von Trier films, Melancholia and Antichrist. I’m just saying I know her face pretty well, and that she’s definitely been touched up for the photo that runs with the interview. In a really seamless and attractive way, I mean. Hats off to the digital guy who made her look 37 as well as the Julian Watson Agency’s Cyril Laloue (hair), Megumi Zlatoff (makeup). It’s just that up until now I’ve always thought that CG makeovers belonged more to the realm of fashion magazines and advertisements. 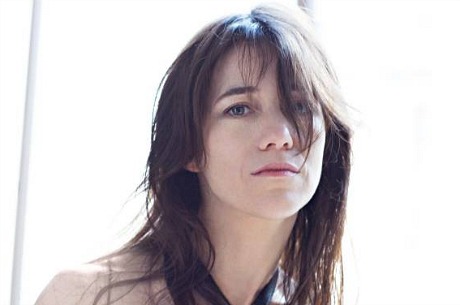 There are two versions of Drew McWeeny — the brilliant, amiable guy I talk to at film festivals and before screenings, and the other guy who tweets strident stuff that sometimes goes over the line. Today he tweeted that I “sided” with that retired police officer, Curtis Reeves, who killed a married father, Chad Oulson, in a Tampa-area movie theatre over a texting dispute last January. I didn’t side with Reeves, for Chrissake. I said the following: (a) “I blame Reeves, of course — this was obviously the act of an unstable personality“; and (b) “Oulson was [nonetheless] being unconscionably selfish and violating Reeves’ rights as a moviegoer.” Except it’s now been reported that Reeves was also texting at the time, and that the altercation happened during the trailers. So that “violating moviegoer rights” stuff doesn’t apply because everyone agrees, I think, that you’re free to do almost anything you want during trailers.

Two people (possibly South by Southwest music festival attendees) were killed in Austin last night by a drunk driver who was fleeing the fuzz. Over 20 others were hurt badly, five critically. The perp is in custody. Austin intends to charge him with capital murder, not manslaughter. I had an early-morning phoner scheduled with Indiewire critic Eric Kohn (who’s been covering the film festival). When he didn’t answer twice I imagined the worst, but he’s okay. We’ll be talking around 10 am L.A. time.