There are two versions of Drew McWeeny — the brilliant, amiable guy I talk to at film festivals and before screenings, and the other guy who tweets strident stuff that sometimes goes over the line. Today he tweeted that I “sided” with that retired police officer, Curtis Reeves, who killed a married father, Chad Oulson, in a Tampa-area movie theatre over a texting dispute last January. I didn’t side with Reeves, for Chrissake. I said the following: (a) “I blame Reeves, of course — this was obviously the act of an unstable personality“; and (b) “Oulson was [nonetheless] being unconscionably selfish and violating Reeves’ rights as a moviegoer.” Except it’s now been reported that Reeves was also texting at the time, and that the altercation happened during the trailers. So that “violating moviegoer rights” stuff doesn’t apply because everyone agrees, I think, that you’re free to do almost anything you want during trailers.

I also said in my original piece that (c) “If a theatre manager had calmly but firmly intervened and insisted that Oulson stop texting (or that he needed to text from the lobby), it’s entirely possible that Reeves would have felt placated and wouldn’t have shot Oulson; and (d) “Movie theatres have become chaotic, emotionally dangerous environments to some extent. Handguns, cell phones, hair-trigger rage…it’s Dodge City out there.” 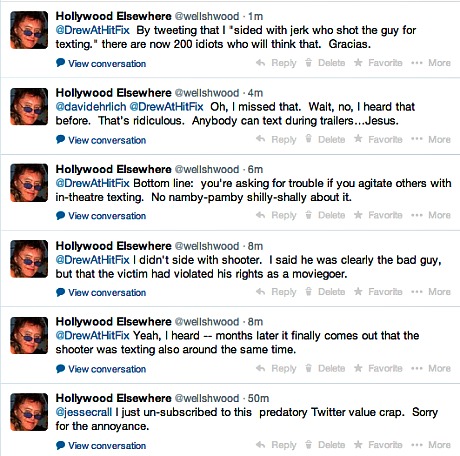