25 Comments
“Just As Sentimental As The Next Fella”

I could watch this Last Picture Show clip every day for the rest of my life. When’s the last time a 21st Century film stopped the narrative and did an extra-slow dolly into a close-up of a character delivering a quiet little soliloquy? This one begins when Ben Johnson says “20 years ago”; the cue for the dolly-back is “I bet she’s still got that silver dollar.”

“This is one superbly composed, austere, Robert Bresson– or Carl Dreyer-like art film — set in 1962 and shot in black-and-white with a 1.37 aspect ratio. It’s about nuns, vows, cigarettes, fate, family skeletons, sex and sexy saxophones, Nazis and Jews and the grim atmosphere of Communist Poland. And it’s anchored by two understated knockout performances — one by the quietly mesmerizing, ginger-haired Agata Trzebuchowska as a young almost-nun named Anna, the other by Agata Kulesza as Anna’s aunt — the morose, blunt-spoken, hard-drinking, somewhat promiscuous Wanda.

Diogo Morgado, the guy who played Jesus of Nazareth in Son of God (as well as in the History Channel mini-series The Bible), is from Portgual, but he basically looks American….like a nice big friendly professional football player or a juice-slurping, doobie-toking hippie farmer from Oregon or Washington. This is how conservative Christians, the audience for Son of God, like to think of their savior — as an ESPN anchor with a beard and cloak. The same syndrome prevailed in Nicholas Ray‘s King of Kings, of course, in which Jesus was played by the all-American, honey-haired, square-jawed Jeffrey Hunter with the freakish ice-blue eyes. That was in 1961, of course, when average Americans were even more caught up in self-reflecting mythology than today’s Christians. For what it’s worth I always presumed Hunter was chosen because of his peepers, which were meant to be perceived as a metaphor for inner divinity. My favorite Jesus is still The Last Temptation of Christ‘s Willem Dafoe, closely followed by The Gospel According to St. Matthew‘s Enrique Irazoqui. 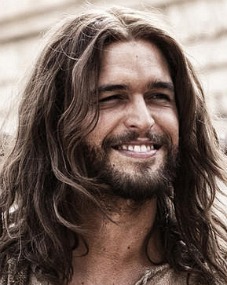 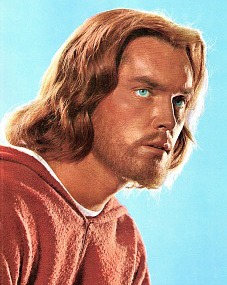 I really like Captain America: The Winter Soldier and so do most of the Rotten Tomato guys — 88%. It’s obviously going to make a huge pile of dough this weekend. But some crab-heads are going “yeah, I guess, sort of but actually naaahhh, not really.” Rope of Silicon‘s Brad Brevet says it’s “just another Marvel movie,” etc. I’ve been picking up on this elsewhere. First, this is bullshit — I know when a movie works so don’t tell me. Second, there seems to be a pattern whenever I like a comic-book or straight action flick. If it delivers the basic elements with low-key intelligence and economy and a semblance of complexity, the geeks say “Hey, why isn’t it geekier? What’s with all the intelligence and economy? Why isn’t it whooshier and more whoo-hoo?” I despise Marvel comic-book movies. For hate’s sake, I spit my last breath on The Avengers and screw any future Thor and Spider-Man flicks while you’re at it. But I come around for Winter Soldier and there’s a contingent saying “don’t make these movies for guys like Wells…who gives a shit what he likes? This is our genre! Make these movies for us or we’ll talk shit about them on comment threads.” Reviews are hereby requested by any and all viewers.

“It’s all about that question does he know or won’t say? Does he even care to know one way or another? Is he a salesman [so] lost inside his ability to sell that he’s no longer reflected in what he’s saying? He’s a man who does not think clearly about things…[who] has the capacity to say contradictory thing seemingly without even realizing that they’re contradictory.” — The Unknown Known director Errol Morris on former Secretary of State Donald Rumsfeld.

“Perhaps I need to see The Unknown Known: The Life and Times of Donald Rumsfeld once or twice more, but my initial impression was one of muted fascination and at the same time vague disappointment. I feel I know Rumsfeld pretty well from his innumerable interviews and press conferences during the Bush years so I went in wanting to know him a little better. I’m not sure that I got that from Morris’s film, although I was certainly engaged start to finish.

In the immediate wake of Field of Dreams Phil Alden Robinson‘s name was spoken in hushed tones. If you really let Dreams “in” (i.e., allowed it to slip past your crusty exterior) you probably developed a notion that it was more than just a movie. It was like Esalen therapy, a kind of spiritual bath. For baseball fans it was like attending church and hearing the greatest sermon of your life. And Robinson, who directed and wrote the screenplay (adapted from W.P. Kinsella‘s “Shoeless Joe“), was presumed to be some kind of pastor with a magic touch. Luck, timing, the hallucination stuff, Kevin Costner, chemistry, James Earl Jones, Ray Liotta…who knows why or whether anything like Dreams could ever happen again? I only know that the ingredients and the servings (i.e., that nighttime shot of a long line of headlights at the finale) were just right.

But then luck seemed to slip Robinson’s grasp. In ’92 he delivered Sneakers, a half-decent caper flick, and then directed Freedom Song, a TV movie about the ’60s civil rights movement (co-written with Stanley Weiser) and was one of the directors of HBO’s Band of Brothers miniseries, and then directed Ben Affleck and Morgan Freeman in The Sum of All Fears…God, what a comedown! The Field of Dreams spirit-soother directing a bullshit Jack Ryan movie about nuclear terrorism…yeesh!

10 Comments
No Offense to Valery

About 30 years ago I read (or remember reading) a quote attributed to Francois Truffaut: “Taste is composed of a thousand distastes.” Did I investigate further? Did I devote hours to learning if the line truly originated with Truffaut or if he was quoting someone else? No. Okay, so I’m lazy. This morning I read a 4.3 Richard Brody column that attributed the quote to poet Paul Valery, who was around before Truffaut. Got it. I’m wise and I know what time it is now. But I’m probably going to continue to attribute the quote to Truffaut. In my mind F.T. is the man — the nouvelle vague guy who made two of my favorite French-language films of all time (i.e., Shoot The Piano Player, The Woman Next Door) and whose name triggers particular cinematic endorphins that I never want to be without. (I once visited his grave in le Cimetiere de Montmartre.) I also prefer the soft but decisive sound of his name compared to Valery’s, which sounds a little bit flowery and wimpish. Sorry but that’s my decision.