As I understand it, editor Jack Severn somehow eliminated the music from the soundtrack of this Goodfellas scene in which Ray Liotta and Lorraine Bracco go into the Copacabana through the kitchen. Nice work. The scene obviously lacks a certain something without the Ronettes’ “Then He Kissed Me.” What other famous bravura scenes might be interesting to watch without the music track? (The music-free clip, which originated on Severn’s site, was totally lifted by yours truly from Brad Brevet‘s Rope of Silicon.)

Jon Favreau‘s Chef (Open Road, 5.9) “is a lot of things — it’s fitting that a road trip movie should be so all over the map — but what it is, most of all, is a celebration of tasty food and the people who make it, and I guess I can get behind that.” — Badass Digest SXSW review by Meredith Borders. I still say there’s a vague element of discomfort in watching a movie about an overweight chef. It’s not a huge stopper. I can get past it. I’m cool. But it is something to get past. If Robert Downey, Jr. had the lead role instead of a cameo, Chef would be a whole different kettle of fish.

Remember the relatively modest career of Kate Mulgrew (Star Trek: Voyager from ’95 to ’01, Star Trek: Nemesis, Throw Momma From The Train)? I’m asking because I’m honestly wondering about her sanity. Mulgrew’s reported opposition to abortion rights obviously indicates a conservative bent (and there’s nothing wrong with that) but her decision to narrate a right-wing religious documentary called The Principle, which advances a belief in geocentrism or a belief that our planet is the center of the universe, suggests she’s gone off the deep end. She couldn’t just be doing this for the money…right? She must be a believer to some extent. How does an actor who convinced hundreds of Hollywood coworkers for three decades that she was a reasonable, level-headed sort who could be trusted…how can a person like Mulgrew evolve into believing that the earth is the center of everything? That’s insane — a Sarah Palin conviction.

With the exception of a very occasional brand-new restoration (like Thursday night’s presentation of Schawn Belston‘s 30-frame Oklahoma! or last year’s special Shane restoration), the TCM Classic Film Festival (4.10 thru 4.13) is about savoring films you’ve seen several times at home but via expert big-screen projection with good (or at least fairy good) sound. If, that is, they’re being shown on (a) the big Chinese TCL IMAX screen or (b) on the almost-as-big screen at the American Cinematheque Egyptian. (All TCMCFF projection is handled by Boston Light and Sound’s Chapin Cutler, one of the best guys in the business, but the architecture of at least one of the Chinese multiplex houses is seriously flawed).

After Oklahoma‘s opening-night showing on Thursday night I have a mild interest in seeing the following films: (Friday, 4.11) Zulu at 11:45 am at the Egyptian, an alleged (i.e., vaguely suspect) 70th anniversary restoration of Double Indemnity at 6 pm at the TCL Chinese, and a 7pm Egyptian screening of Harold Lloyd‘s Why Worry? at 7pm; (Saturday, 4.12) The original 1954 Gojira at the Egyptian at 11:45 am, sAND the digitally-restored version of William Friedkin‘s Sorcerer at the TCL Chinese at 9:15 pm; (Sunday, 4.13) Nothing pops out.

The usual publicists are sending out the usual queries to Cannes-bound journalists: are you attending, for how long, what’s your contact info and where will you be staying? Answer to everyone: I always do the whole thing. (Who flies all the way over there to only attend half of it?) All contact info is the same everywhere. People used to rent European cell phones five or ten years ago but Skype’s cell or land-line calling options have invalidated that. It’s all texting and email. And no publicist or distributor will ever mail or messenger anything to my local address (7 rue Jean Mero) so I don’t know why they want that.

Three and half more weeks of spotty, low-energy April diversions and I’m off. Flying to NYC on 5.1 and staying there 8 days. Red-eye to Paris on Friday, 5.9. Stay there and acclimate until Tuesday, 5.10. Save money (Easy Jet baggage fees are ridiculous not to mention transportation out to Orly or CDG) by taking train down to Cannes that morning.

Say what you will about Anthony Lane not brandishing the right kind of Movie Catholic credentials, but in this 4.14 New Yorker review he’s captured the essence Jim Jarmusch‘s Only Lovers Left Alive (Sony Classics, 4.11) saying (as I’ve been observing repeatedly since I first saw it eleven months ago) that he’s “not sure that Jarmusch has really made a vampire film at all, still less a horror flick,” and that Tilda Swinton‘s Eve and Tim Huddleston‘s Adam “are more like junkies than predators.” 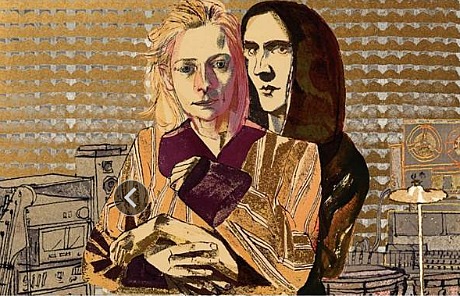 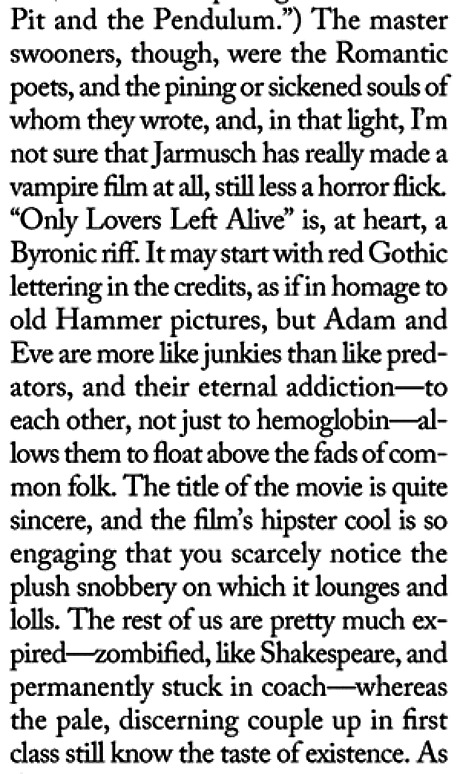 This Jamie Stuart interview with Only Lovers Left Alive star Tilda Swinton is cool as far as it goes, but it needs a kicker of some kind. I don’t know what kind of kicker exactly (I’ve got enough aggravation) but I know it needs one. I love Stuart’s video pieces, mainly because they’re always highly conceptualized and very thought-out in a dry, less-is-less way. For the 16th or 17th time, Jim Jarmusch‘s Only Lovers Left Alive (Sony Classics, 4.11) “is a very droll, no-laugh-funny vampire movie about middle-aged goth hipster musician types — a nocturnal lifestyle movie that Lou Reed would have loved. After catching it 11 months ago in Cannes I called it ‘a perfect William S. Burroughsian hipster mood trip…I sank into it like heroin.’ Swinton, Tom Hiddleston, Mia Wasikowska, John Hurt, Anton Yelchin and Jeffrey Wright.

Best Interview Ever from The Mutiny Company on Vimeo.