My beloved Birdman, which I haven’t seen a frame of but have really wanted to see for a long, long time, will not debut in Cannes next month. It’ll most likely have its first screenings in Venice and/or Telluride instead. I have to be honest and say that I’m very disappointed and more than a little sad…but I guess I can adapt. 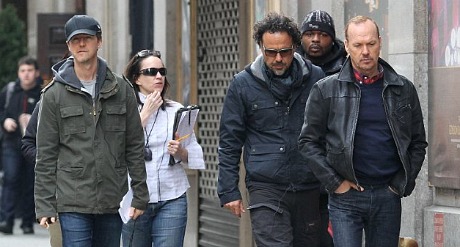 I’ve been presuming for eight and a half months now that Alejandro Gonzalez Inarritu‘s midlife-crisis comedy, which is about a former superhero actor (Michael Keaton a la Robert Downey ten years from now) trying to produce a stage play, would turn up at the Cannes Film Festival. Why? Because Inarritu screened a cut of Birdman last July for friends, and soon after one of them shared the following: “I know you and I know your taste, Jeff. And I am telling you this [film] is a mind-blowing exercise in pure cinema…it puts AGI in a different league. I was humbled, moved and full of love in seeing him bloom into an artist of a massive calibre…transforming, evolving.

Two and a half years ago (i.e., in August 2011) Go Home Productions‘ Mark Vidler posted this mix-mash of Paul McCartney‘s “Band on the Run” and John Lennon‘s “Imagine.” It took me all this time to catch up with it, but that’s how hip I am. This sounds great, I swear to God. It almost sounds magical. It’s mostly the McCartney tune, of course, but the more complex chords add a measure of soul. It’s a real-deal Lennon-McCartney collaboration.

Seven and a half years ago a BBC story reported the views of “evolutionary theorist” Dr. Oliver Curry about a Time Machine-like development in human evolution. The forthcoming Bluray of George Pal‘s The Time Machine goaded Luke Y. Thompson into discovering this story and passing it along. It said that Dr. Curry, based in ’06 at the of the London School of Economics, believes that “humanity may split into a genetic upper class and a dim-witted underclass in 100,000 years’ time. The human race would peak in the year 3000, he said, before a decline due to dependence on technology. People would become choosier about their sexual partners, causing humanity to divide into sub-species, he added. The descendants of the genetic upper class would be tall, slim, healthy, attractive, intelligent, and creative and a far cry from the ‘underclass’ humans who would have evolved into dim-witted, ugly, squat goblin-like creatures.” This, of course, is precisely how things are now in 2014, so what’s with the far-in-the-future scenario?

For the unpardonable sin of missing A Most Wanted Man (Lionsgate/Roadside, 7.25) at last January’s Sundance Film Festival, I am apparently doomed to wander the earth in a sack cloth until they finally show it to me…what, in June? I’d really like to catch it sometime this month. Some of those who saw it at Sundance were saying it was too grim and measured and downbeat, but a 91% Rotten Tomatoes rating is nothing to snort at.

The first thing that came to mind when I saw this crowd-funding pitch was a little graffiti cartoon that Griffin Dunne sees on a bathroom wall in After Hours, an image of a shark chomping down on some guy’s appendage. People are still falling for this shite after the Veronica Mars burn? They’re given the privelege of contributing X dollars in exchange for what exactly? What could Sharknado 2 possibly give or share that would be worth it, short of a possible cameo?

16 Comments
Hate At The Ace

A Film Independent member and friend-of-HE has managed to purchase a $200 ticket on my behalf to the Quentin Tarantino Hateful Eight script-reading event at the Ace Hotel theatre on Saturday, 4.19. I don’t pay to attend cool industry events or so I can sample hipster vibes first-hand, but I did this time. I am a sucker, yes, but at least I’ll be there and will deliver a good report. (How fat is Tarantino these days, or has he gone cockatoo?) The reading will presumably happen in the evening. “Quentin, please…please turn this deliciously well-written western into an actual film!…we need it in our communal bloodstream,” etc.

I’m not moving anywhere but I’ve got movers coming at 2 pm, or an hour from now. All the furniture is going outside for the night so new floors can be installed first thing tomorrow morning. I’ve been tossing stuff stuff left and right. I’m dumping 80% of my DVDs, or those which I haven’t watched in years and probably never will watch again. If I want to watch something I’ll just stream it — to hell with leftover physical media. Except for the Blurays, of course. It’s hot outside and I’m fairly damp and the cats are upset. I’ve been packing and dumping since late last night. Plus I have the TCM Classic Film Festival to attend tonight. If anyone knows how to do all this plus a 6 pm screening of Double Indemnity plus Harold Lloyd‘s Why Worry? at 7:15 pm plus bang out the usual six or seven HE stories, let me know.

Schawn Belston‘s restoration of the roadshow version of Oklahoma! (1955), which replicates the original 30-frame-per-second Todd-AO process for the first time in 30 years, was shown last night on the big TCL Chinese screen at the opening of the TCM Classic Film Festival.

The film itself is impossible — square, complacent, cornball, plodding, slow as a snail — but the visuals were a delight. Congrats again to Belston and his team for a job very well done.

But I have to say I was dumbfounded when TCM’s Robert Osborne omitted any mention of the 30-frame-per-second Todd-AO photography in his opening remarks. He just said once or twice that Todd-AO delivered a big, grand image…but no specifics. Either Osborne forgot or he decided that the term “30 frames per second” would go right over people’s heads. Amazing.

Oklahoma! itself is a glaze-over, for the most part. You sit and watch it, and it goes on a bit longer than you’d prefer. The tunes catch lightning every so often. I really enjoyed Rod Steiger and Gordon Macrae‘s “Poor Judd is Dead” duet. If only there wasn’t this feeling of complacency, of an overly revered stage play being shot by cameras that weight ten tons, of the filmmakers coasting on the laurels of the original 1943 Broadway stage production, which (along with the earlier production of Jerome Kern‘s Showboat) changed the character and upped the game of American musicals.

If only the Curly-Laurey-Judd triangle made a lick of sense. If only the photography wasn’t so conservative and the cutting so uninquisitive. If only Laurey’s dream sequence didn’t use replacement dancers for Macrae and Shirley Jones (why were they even hired if they couldn’t handle a few modest ballet moves?). If only it didn’t seem as if director Fred Zinneman was on a Thorazine drip and wearing a straightjacket during filming. If only those jutting Arizona mountain peaks (i.e., total fiction compared to the typography of the real Oklahoma) weren’t visible in all the exteriors.