Will 42 year-old Eli Roth ever attempt anything other than “ironic” exploitation fare about blood and organs and disembowelings? Of course not. Before he made The Green Inferno Roth hadn’t directed a film since ’07, but he seems perfectly happy being the Herschel Gordon Lewis of the 21st Century. (If he wanted to climb out of the genre dungeon he’d have made his move by now.) Compared to Roth, Robert Rodriguez and Quentin Tarantino, who share his enthusiasm for grindhouse genre wallowing, are Samuel Fuller and David Lean.

We’ve been down this jungle trail before. The holy grail of cannibal movies, of course, is Ruggero Deodato‘s Cannibal Holocaust (’80). For what it’s worth I was totally down with Jonathan Hensleigh’s Welcome to the Jungle (’07).

Allen Barra‘s 4.13 Salon review of Scott Eyman‘s “John Wayne: The Life and Legend” has at least two glaring factual errors. He writes that (a) The Petrified Forest, in which Humphrey Bogart launched his career as the fearsome Duke Mantee, was released in 1941 when it opened on 2.6.36, and (b) that The Big Trail, the 1930 Raoul Walsh western in which Wayne had his first major starring role, was in “Technicolor.” (It isn’t.) You’re obviously stuck with your errors in a print publication, but an online publication can correct wrongos immediately and repeatedly. (I post corrections almost every day.) Barr’s piece was posted last Sunday morning around 9 am, and yet as of right now — Wednesday, 4.16, at 3 pm — the errors are still in the article. What kind of bullshit absentee editing system does Salon have in place? If you want to acknowledge the errors, fine, but fix them. And not within days but hours if not minutes.

The interesting thing about some of Tom Junod‘s more colorful observations about Tom Hardy in the current Esquire (i.e., that he’s emotionally intense, has “taken swings at directors” and duked it out with Shia LaBeouf, that Mad Max: Fury Road costar Charlize Theron found him “weird and scary and wanted him kept away from her”) is that he radiates a Zen-like calm in Locke. The film “mostly works because of Steven Knight’s superior script and Hardy’s quiet, authoritative, carefully phrased performance…his best yet, I feel,” I wrote on 4.8. I ran into Hardy two or three years ago at the Four Seasons — he’s not a day-at-the-beach type but he’s no bullshitter and is basically cool. 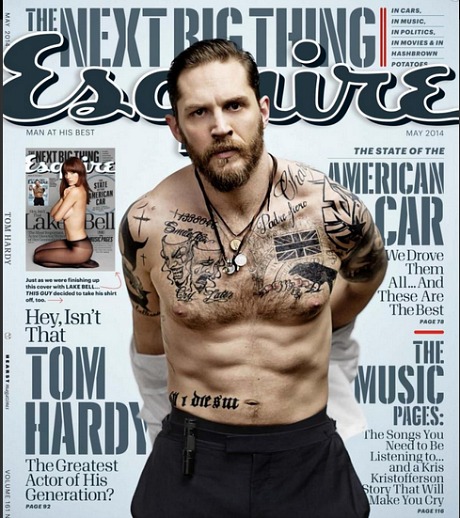 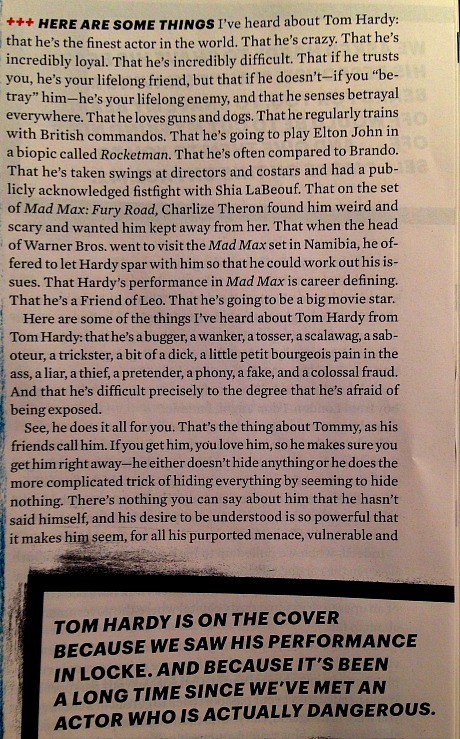 19 Comments
Heaven Will Be Profitable

Why is it that I find the the Heaven-accepting, death-defying premise of Warren Beatty‘s Heaven Can Wait deeply moving (especially the final scene inside the L.A. Coliseum), but the idea of watching Randall Wallace‘s Heaven Is For Real (Sony, 4.16) completely repulsive? Not just because of the loony-visions aspect (i.e., Jesus riding on a rainbow-colored horse), but because Gregg Kinnear‘s way of speaking to his on-screen son, played by Connor Corum, is horribly cloying and patronizing. (Never talk down to young kids — I always spoke to mine as if they were 30.) And Corum’s acting is quite grating. The trailer clips are oppressive enough — I can’t imagine sitting through the entire 100 minutes.

The film is based on Todd Burpo‘s 2010 book “Heaven Is For Real,” about a near-death death experience by his four year-old son Colton in which he visited a realm that he believed was “heaven.” Colton apparently claimed “that he personally met Jesus riding a rainbow-colored horse and sat in Jesus’ lap, while the angels sang songs to him. He also says he saw Mary kneeling before the throne of God and at other times standing beside Jesus.” Just reading that makes me quite angry. Seeing it in a film would be torture. Despite a 50% Rotten Tomatoes rating, Heaven Is For Real is expected to do very well commercially.

Right now the three Rotten Tomato reviews of Paul Haggis‘s Third Person are strongly negative, but a 9.10.13 review by Variety’s Peter Debruge differed: “With segments set in Paris, Rome and New York, this tony contempo romance serves as a Crash course in complex modern relationships, focusing primarily on issues of guilt and trust as they relate to love. Though virtually every twist on this emotional roller coaster feels preordained by its architect, [Haggis] leaves certain mysteries for the audience to interpret, making for a more open-ended and mature work all around. It’s hearty fare by arthouse standards, and should perform well with thinking auds the world over, boosted by a starry cast.”

There’s only thing that seems ill-considered about Cedric Klapisch‘s Chinese Puzzle (Cohen Media Group, 5.16) is the title. Yes, it’s largely set in Manhattan’s Chinatown and involves a somewhat puzzling tangle of relationships centering around a French writer in his late 30s (Romain Duris), but the title doesn’t even hint at the buoyant spirit and mood of the trailer. It hasn’t caught major festival heat so far, but it’s well liked. It played the London Film Festival last October. Positive reviews have surfaced in Australia, where it opens later this week. It’ll play at L.A.’s COLCOA Festival. I’m seeing it tomorrow morning at 10 am, and I hate attending screenings at that hour.

Women commonly say “you know what?” before declaring they’ve had it with you because you’ve crossed some kind of rhetorical or behavioral line. They’ll say it before deciding to terminate a conversation or a relationship or whatever. “You know what? We’re finished talking” or “You know what? I don’t think this is going to work out”…that line of country. I recall producer Stacy Sher saying this to me in the mid or late ’90s when I got a little too pushy during a phone interview. I’m mentioning this phrase because I’ve never once heard a guy, straight or gay, say “you know what?” This is strictly a female expression. There are very few that are exclusive to one gender or another, but “you know what?” is apparently one of them. Unless someone has different information.

In response to yesterday’s mystifying news about German director Fatih Akin having withdrawn The Cut, which had been submitted to the festival, for vague “personal reasons,” a reputable distribution source offers the following: “This is totally unconfirmed and 200 percent hearsay, but word has it Akin pulled out of Cannes because Thierry Fremaux wouldn’t offer him a definite slot in the competition, but wanted him in Un Certain Regard with a chance of being upgraded to competition if some other title wouldn’t come through. Akin felt shortchanged and didn’t want to go along with that plan.”

The source suggests that Fremaux’s alleged decision to include Christian Petzold‘s Phoenix as a competition title was behind the Cut snub, and therefore a factor in Akin’s withdrawal.

“It is considered a certainty — at least here in the German industry — that Christian Petzold‘s Phoenix, a drama starring Barbara‘s Nina Hoss, will screen in competition — everything else would be a big surprise (which apparently was the reason he didn’t even submit Phoenix to the Berlinale). Petzold (Barbara‘s director) is held in the highest regard among French cinephiles. Given Cannes’ problematic relationship with German cinema in the past, Fremaux probably didn’t want to have two German titles in competition. But that’s total conjecture on my part.”