Earlier today a Facebook post announced that Kim’s Video (124 1st Avenue, New York, NY 10009) will be closing soon. I just called a few minutes ago and one of the clerks said (a) the closing date will be 7.15 and (b) management is hunting around for another location. This is nothing short of devastating to me. Kim’s has always charged too much for Blurays but I love roaming the aisles and seeing what’s new. It’s my spiritual home away from home. Kim’s has Blurays or DVDs of every movie you’ve ever heard of and a lot that you haven’t. Their cult collection alone is worth regular visits, not to mention their Region 2 films. This is terrible news. An obvious devaluation of Lower East Side culture. 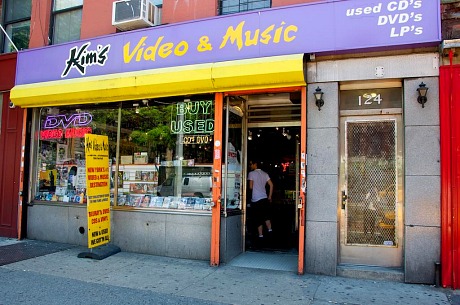 That classic 1971 American Tourister gorilla luggage commercial taught tens of millions of Americans a basic lesson about luggage at airports, which is that it’s going to get roughly thrown around. (The spot also said, quite obviously, that baggage handlers are unrefined types.) I therefore can’t fathom why anyone was shocked by that video of those two Air Canada guys throwing suitcases off the top of a landing gate…that’s totally normal. The two employees have been canned. Tony Montana: “You got to be kidding…five hundred? Who you think we are, baggage handlers? The going rate on a boat is a thousand a night, mang…you know that.”

I don’t get the relatively weak ratings (59% Rotten Tomatoes, 56% Metacritic) rating for John Turturro‘s Fading Gigolo (Millenium, opened on 4.18). It’s not great but it’s fine, and there’s just no reason to be brusque or dismissive. Last September I called it “a gentle, Brooklyn-based, light-touch, indie-romantic fable. It’s appealing in a kindly, burnished, old-fashioned way, and it happens in a realm entirely (and in some ways charmingly) of Turturro’s imagining. Eroticism, trust me, barely pokes through. The atmosphere is one of reverence, nostalgia, dignity, romance, class, compassion, tradition. The big standout element is gap-toothed Vanessa Paradis making her English-language debut.”

Then again what I’ve written above is a moot point as Fading Gigolo did pretty well last weekend. Audiences ignored naysaying critics as well as the general Woody Allen hate brigade. Here’s a piece by Deadline‘s Pete Hammond sussing out the numbers and the meaning of it all.

Update: Two Hollywood execs — Garth Ancier and David Newman — and a theme-park design guy, Gary Goddard, were named earlier today as defendants in new sex-abuse lawsuits announced by attorney Jeff Herman on behalf of Michael Egan. No offense but this isn’t the hot-news followup I was envisioning when Herman mentioned last week that more defendants would be named. Ancier, Newman and Goddard aren’t as well-known as Bryan Singer, whom Egan and Herman filed against last week in a civil action. They’re just not that “sexy” in a news sense. I’m just being honest.

The West Coast premiere of The Other Woman (20th Century Fox, 4.25) happens tonight in Westwood, and Hollywood Elsewhere will totally be there with bells, camera and notepad. An obviously broad sisterhood comedy (the term “sismance” doesn’t work at all) about taking revenge upon insensitive males, it’s been directed by Nick Cassevetes, produced by Julie Yorn and written by Melissa Stack. The Australian critics posting on Rotten Tomatoes are mostly negative (45%) — it might as well be faced. What I’d like to know is how does Cassevetes go from directing She’s So Lovely (’97), John Q (’02), The Notebook (’04) and the semi-respectable Alpha Dog (’06) to …uhm, this?