A producer friend told me yesterday she was unable to get tickets for a couple of films at COLCOA, or the City of Lights City of Angels Film Festival (4.21 thru 4.28), which is now in its 18th year. That turned a light on. I’ve been attending COLCOA for several years now without too much difficulty, but now demand is apparently surging. So I spoke late this afternoon with the fest’s executive producer & artistic director Francois Truffart to ask about this. He confirmed that yes, things are crowded and “we didn’t have this situation before…it’s very unanticipated for now.” But he stressed that while many seats are held for co-sponsoring guild members, that doesn’t mean last-minute seating is out of the question. Truffart stressed that “we don’t want people to feel discouraged.” Earlier today he told Screen International‘s Elbert Wyche that COLCOA “has a 20,000-seat capacity and [is] almost full…we are not able to accommodate every person that wants a ticket [but] every year we add new screenings. [And of course] we like to create this kind of demand for French cinema. We want people to go to the theatre to see the film or on VOD during the year.” Here’s an mp3 of my brief discussion with Truffart. 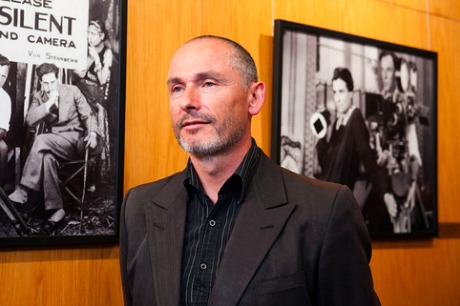 Metaphors for the devolution and degradation of mainstream movie culture are tumbling out of the pipe today. A Parkes+MacDonald Mattel Barbie movie for Sony. A marshmallow peeps movie. A movie based on the “It’s a Small World” Disney ride“…good God! There’s no level to which the opportunists in this town will not stoop. 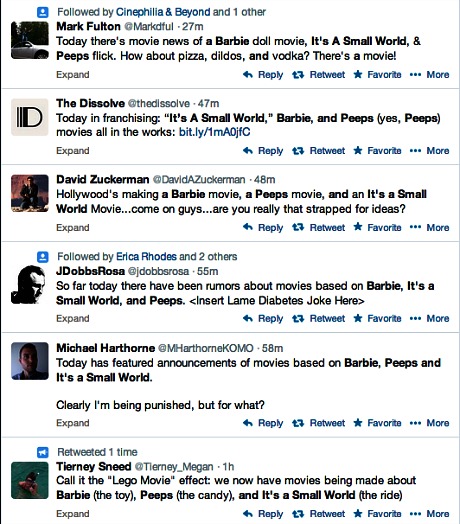 The grotesque cartoon art of Gahan Wilson has been lurking in a dark corner of my consciousness since…I forget. My exposure to Wilson began with I started flipping through issues of Playboy, which dates me, I realize. I never read up on the guy, much less chatted with him at some geek comic-cook convention, so I really wouldn’t mind seeing Born Dead, Still Weird when it surfaces on iTunes on 5.13.

Today’s Variety story about Paramount and MGM teaming on a theatrical remake of Ben-Hur is one thing, but agreeing to hire a known animal like Timur Bekmambetov to direct is…I don’t know how to react in a single phrase but “sick joke” is the first thing that came to mind. It’s not just that Bekmambetov (Wanted, Abraham Lincoln — Vampire Hunter) is generally regarded as lacking in aesthetic couth. It’s the metaphor suggested by this unholy alliance. What this project symbolizes is present-day corporate Hollywood (even with the respectable John Ridley having co-authored the screenplay) getting up and lumbering over and dropping its pants and taking a giant smelly gooey brown dump on classic Hollywood history. How do you like that milkshake, o ye ghosts of William Wyler and Charlton Heston? Your Oscar-winning 1959 revenge flick is about to be re-interpreted and CG-ed to death by a Russian-born director who looks like a vodka-swilling garbageman who beats his wife. Which reminds me: Wyler’s chariot-race sequence can not and will not be improved upon because it was all shot live and 100% organically, and there’s no way in hell Bekmambetov can hope to replicate its impact, much less better it.

Yesterday’s Other Woman riff was mainly about how Nick Cassevetes‘ hit-and-miss film, although by no means on the level of Lubitsch or Wilder, was at least better (i.e., “not half bad”) than the dumbass downmarket girly-girl film that 20th Century Fox marketing has been selling. Variety‘s Justin Chang has ignored this discrepancy and just reviewed it head-on. Chang is less admiring than myself (okay, he’s 65% dismissive), but he also feels it’s an interesting mixed-bag.

“The Other Woman often feels stranded between gross-out comedy, romantic fantasy and distaff psychodrama in a way that compels fascination and impatience alike,” he says at mid-point. “The film’s structure and pacing feel haphazard at best, the musical choices clumsily tacked on, the raunchy elements weak and unnecessary. There are moments when Cassavetes seems to be operating on Hollywood-hack autopilot, and others when you can almost feel him nudging the production in the sort of rougher, more offbeat character-driven direction that his famous father, John, might well have encouraged.

For whatever reason I decided during Monday night’s screening of The Other Woman that costar Taylor Kinney (the co-lead on NBC’s Chicago Fire) is likable and cool. I’ll admit that this 32 year-old actor doesn’t seem all that deep or intriguing in this red-carpet interview clip (in which he oddly refuses to discuss what The Other Woman is about) but in the film he comes off as an entirely nice, decent, intelligent Irishman (i.e., an XY counter-balance to Nikolaj Coster-Waldau‘s flaming asshole). Some actors aren’t that Albert Einstein-y or Carl Sagan-ish on their own dime, but they deliver a steady, agreeable and positive vibe on-screen and that’s what counts in the end. He’s been romantically linked with Lady Gaga since 2011, but most showbiz relationship go south after 18 to 24 months so who knows if it’s still happening? Kinney had a minor costarring role in Zero Dark Thirty but I don’t remember him. I’m told he played a SEAL in Act Three.