I don’t think the ’77 version is fatty or draggy at all. If you cut the “fat” out of any film you remove the connective tissue (atmosphere, downtime, minutiae) that made it a flavorful, semi-organic experience in the first place. The fat is an essential ingredient in the overall — this is what the ADD generation can’t seem to get. At least Nusair’s cut will fan interest in the real thing.

I’ll be seeing All The Way, the LBJ play with Bryan Cranston, and the acclaimed but under-attended Bridges of Madison County during my week-long stay in Manhattan (5.2 through 5.9). All The Way has now been Tony-nominated for Best Play along with Cranston for Best Actor, but poor Bridges, which has been struggling with ticket sales, didn’t snag a Best Musical nomination…shocker. It was nominated for Best Score (music and lyrics by Jason Robert Brown) and Best Actress in a Musical (Kelli O’Hara). Here’s hoping it survives, at least until I attend next week.

What else should I see? I can only afford what I can afford, but I’m open on Friday night (5.2). A friend recommends Lady Day at the Emerson Bar and Grill with Audra McDonald or Hedwig and the Angry Inch or Beautiful, the Carole King musical.

I suspect that if CBS had offered David Letterman‘s slot to Craig Ferguson, he wouldn’t be talking about leaving. You can say “oh, no…he’s not pissed” and “he’s definitely not quitting out of pride” but I’m not buying. The Letterman slot opened up, Feruguson must have wanted it, he didn’t get it and so “eff this pop stand.” It’s one thing to be the 12:30 am guy after Letterman but after Stephen Colbert? I don’t blame him for a second.

Comments a friend: “Ferguson had it written into his contract that if he wasn’t offered the Letterman show, CBS would pay him a one-time $10 million dollar fee. I think he must have received it in his bank account today, took one look at it, and said, ‘Done by December!'”

How do you watch Josh Boone‘s The Fault Is In Our Stars or read John Green‘s novel of the same name without wondering which character will die first? What else is there to do when your story is about young kids with cancer (Shailene Woodley, Ansel Elgort)? You know at least one will be gone by the end of Act Three. If this didn’t happen audiences would feel jerked around. Yeah, I know — nobody’s assured of a long life. Distributed by Temple Hill, Fault opens on 6.6.

I was informed today that Warner Bros. won’t be screening Godzilla for me and other critics and columnists on my level until the evening of Wednesday, 5.14, or two days before it opens in the States, at which point I’ll be in Cannes. WB publicity knows, of course, that a fair-sized portion (a majority?) of the critic-and-columnist fraternity will be in Cannes from 5.13 through 5.25 so almost nobody will be around for the 5.14 showings. WB obviously wants the Twitter buzz on a low flame until the last possible minute. They’ll be screening Godzilla this week to ultra-elite editors and electronic media types (the first two Manhattan showings are on Thursday, 5.1, and Friday, 5.2), and I’m sure subsequent screenings on both coasts will follow next week. Guys like me will just have to cool our jets. As Godzilla opens commercially in France on Wednesday, 5.14, my best option is to pay to see the first show at a commercial cinema in Cannes and then file right away. Doing so will conflict with the first day of Cannes Film Festival screenings but I guess I can manage.

I’ve been driving up and down Benedict Canyon a lot lately, and I don’t mind saying it’s a wee bit creepy glancing at a big gorilla statue with glowing red eyes every time I drive by 1280 Benedict Canyon Drive, which is just beyond the Beverly Hills city line. The gorilla is a few inches from the curb and right next to the driveway. There’s also a chimpanzee sculpture on the other side of the driveway and a King Kong-sized gorilla sitting on a hill just inside the gate. What is a home owner saying by having three apes “guard” his property? He’s saying he’s eccentric, has a bit of an ego, isn’t a timid businessman, somebody with a machismo complex, looking for attention. A seemingly reliable source (www.city-data.com) says the owner is Urban S. Hirsch III, the founder of Ink Systems, Inc. I suppose that life-sized ape sculptures are cool in and of themselves, but it’s just…I don’t know, a little weird to see these big apes as you’re driving by. Then again it’s no biggie. I can roll with it. 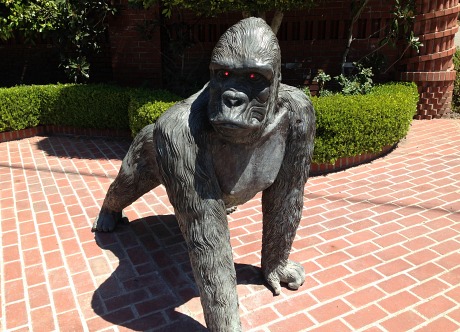 Damon Lindelof and Tom Perrotta‘s The Leftovers (HBO, 6.29) is basically about a rapture-like event in which 2% of the world’s population (roughly 143,000,000 souls) suddenly vaporizes. Or “ascends,” if you’re a believer. Based on Perotta’s 2011 novel, it would appear to be a close relation of Michael Tolkin‘s The Rapture (’91), hands down the most horrific film about born-again Christians ever made. The pilot was directed by Peter Berg. The lead costars are Justin Theroux (what’s be been doing besides lying around with Jennifer Aniston?), Amy Brenneman, Christopher Eccleston, Liv Tyler and Ann Dowd.

The 2014 Cannes Film Festival jury members were announced earlier today — Carole Bouquet, Iranian actress Leila Hatami, Willem Dafoe, Gael Garcia Bernal, Nicholas Winding-Refn, director Sofia Coppola, South Korean actress Jeon Do-yeon and Chinese director Jia Zhangke plus previously announced Jury boss Jane Campion. Is it unfair to suspect that the women will probably vote as a bloc, favoring films that engage with the usual female concerns (families, emotions, relationships)? Bernal is an engaged liberal humanist who’s probably inclined to reward engaged liberal humanism in films. Dafoe is an adventurous actor but at the same time one suspects that he might be an obliging metrosexual go-alonger (i.e., loves to work and very much wants to stay in the game so no obstinate, against-the-grain opinions). Refn is the only certifiable loon (no other term applies if you’ve seen Only God Forgives) in the group. I don’t know what Jia Zhangke’s deal is but…naah, I shouldn’t say. By and large it doesn’t feel like any kind of contrarian, thorny-minded group. I’m getting a vibe that they might be a bit on the mushy, accommodating side — the kind of jury that mainly wants to show love whenever and wherever possible. But you never know.

With Gareth Edwards‘ Godzilla (Warner Bros., 5.16) just around the corner, Edwards‘ Monsters (’10) is worth recalling. I loved the look of the trailer but for some reason I never got around to the feature, which Magnolia distributed. It earned a lousy $237,301 domestic and $4,005,677 international. So nobody saw it including me. As part of my Godzilla prep I intend to see it this week on Netflix.

“The one film you must see if you haven’t is Monsters,” Hollywood Reporter critic Todd McCarthy wrote this morning. “I saw Edwards introduce the restored original Godzilla at the TCM festival a couple of weeks ago and he’s very impressive — a smart, quite self-deprecating young Brit who, on Monsters, directed, shot, wrote, did the production design and all the effects himself. It was shot on location in Mexico, Guatemala, Costa Rica and the U.S. The camerawork is fantastic, the sense of being on the road and living by your wits in Central America, the music and the uncliched and novel approach to making a monster movie — all exceptional. 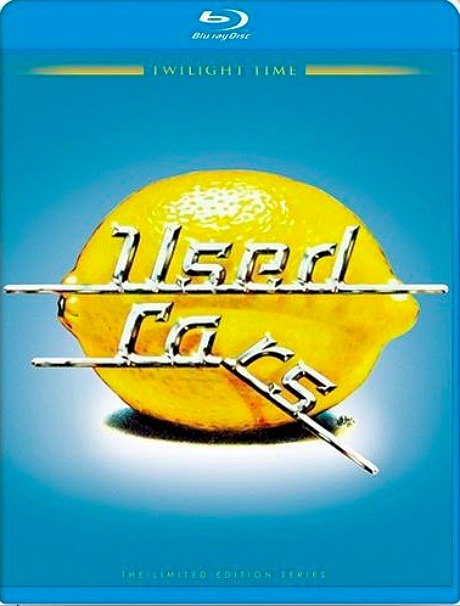 The Knick is a 10-episode period drama (set in the early 1900s) from director Steven Soderbergh.and starring Clive Owen as Dr. John W. Thackery: “We live in a time of endless possibility…more has been learned about the treatment of the human body in the last five years than was learned in the previous 500…that is where we’ll start unlocking the mystery.” Costarring Andre Holland, Eve Hewson, Cara Seymour and Juliet Rylance. 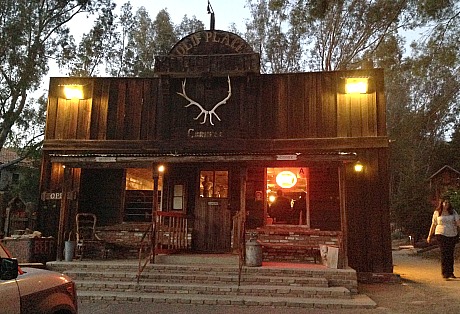 The Old Place, which I’ve now visited three times counting last night, is located in the little hamlet of Cornell, tucked away in the hills above Malibu. Sadly, the wrong kind of people (low-rent zombie developers without a smidgen of taste or class…people who just don’t “get it”) have built homes there. This used to be a ’60s and 70s time-capsule community (you can faintly sense the hovering presence of the ghosts of Sam Peckinpah, Steve McQueen and Jason Robards) but the old funky flavor is fading fast. 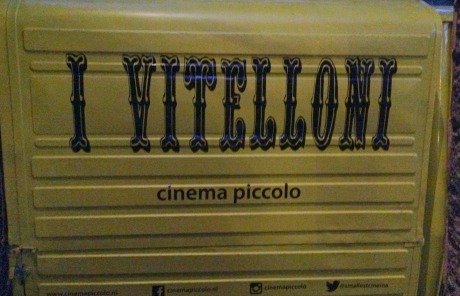 I don’t know why but the little yellow Cinema Piccolo van (i.e., “the world’s smallest cinema“), which was seen around Los Angeles in February and March, was looking lonely and abandoned last night in front of The Old Place. 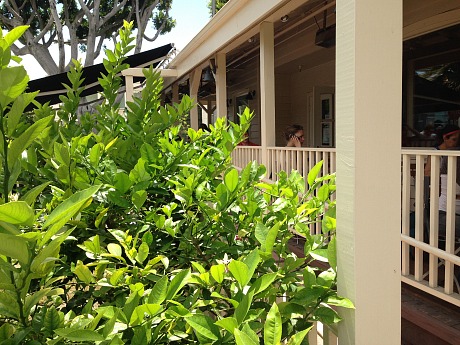 Today was/is one of the most sunny and beautiful sky-blue Los Angeles days in a long time. 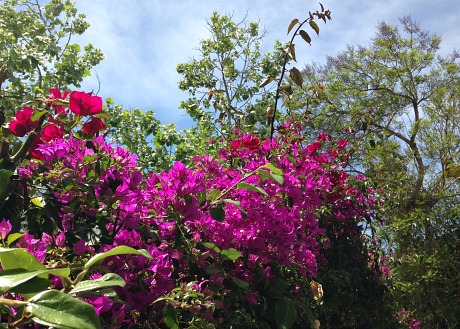