Here’s to the legendary Efrem Zimbalist, Jr., who passed earlier today at age 95. Zimbalist was an old-style Republican whose best-known role was Inspector Lew Erskine on The FBI, the Quinn Martin series that ran from ’65 to ’74. But Erskine wasn’t cool. Zimbalist (an apparently interesting guy who fell under the sway of Maharishi Mahesh Yogi for a period) unfortunately played an FBI agent and spread pro-FBI, pro-J. Edgar Hoover propaganda during a period in American history when it was really, really uncool to do that. At least Zimbalist delivered classic coolness as Stu Bailey, senior shamus along with Roger Smith and Ed “Kookie” Byrnes, in 77 Sunset Strip, which ran from ’58 to ’64. Zimbalist acted in several features (I remember his playing a commercial pilot in Airport ’75) but he was first and foremost a TV guy. His Russian-born father was a celebrated violinist.

From my 6.13.09 review of Robert Kenner‘s Food, Inc.: “[This] is a stirring film, all right. It makes you never want to eat anything other than organic fruit and vegetables ever again. It quite rightly raises suspicions that poisons are coursing through your system. And let’s face it — if you’re any kind of meat-eater or frequenter of fast-food joints, they probably are. On top of which you’re probably a bit more of a porker than you should be. Don’t think corporate America isn’t down with that.

In this Bloomberg video excerpt, Steve Wynn is basically saying that George Clooney is a molly-coddled, reality-detached lying drunk. Wynn claims that Clooney (a) is “a victim of [a] special prejudice” because he’s been so well-paid and so thoroughly coddled by the film industry, (b) is incorrect about Wynn, a conservative, having allegedly called President Obama an “asshole” and is incorrect about Clooney having called Wynn the same, either due to Clooney being an outright liar or a fantasist, and (c) that Clooney’s fantasy is perhaps due to his having been bombed on tequila when the incident in question happened.

Most of what Wynn says sounds like bullshit to me. I know Clooney somewhat (spoken to him two or three times, hung with him a bit on the set on Monuments Men) and he’s not my idea of a typical fiddle-dee-dee Hollywood jerkwad. He’s a straight-shooting hombre with refined taste in movies, and a guy who keeps his word. On top of which Wynn went to the wrong plastic surgeon. What’s with that jawline?

Clooney’s response: “[Wynn] said I live in a bubble. More of a bubble than Las Vegas? Honestly? He says I’m ‘money coddled,’ that I’m surrounded by people who coddle me. I would suggest that Mr. Wynn look to his left and right and find anyone in his sphere that says anything but ‘yes’ to him. Emphatically. I did not attend a private boys’ school. I worked in tobacco fields and in stock rooms and construction sites. I’ve been broke more of my life than I have been successful, and I understand the meaning of being an employee and how difficult it is to make ends meet.”

The late Bob Hoskins and the still-among-us Cheryl Campbell in a scene from Dennis Potter and Piers Haggard’s Pennies From Heaven (’78), a landmark BBC miniseries that put Hoskins permanently on the map. I tried re-watching one of the episodes after Hoskins’ passing, but it’s so dark and murky-looking (on YouTube, that is) that I gave up.

From journalist-critic Chris Willman, a longtime Entertainment Weekly staffer: “I have grain on the brain just because I’m an HE reader, so I couldn’t help but noticing a surprising amount of the stuff when I saw the restored A Hard Day’s Night at the Chinese during the recent TCM Festival. Grain doesn’t bother me, but it was noticeable enough on that big screen that I was conscious of it several times and thinking about how it may be an issue for some folks, if it looks on Bluray like it did in this new digital print.

“I guess I was most aware of it during outdoor daytime sequences, where the overcast English sky was anything but a pure blinding white. I don’t remember being aware of grain when I’d seen it in the past, but I tend to be accepting of grain in contemporary remasters, because I assume it’s there in the source material and I’m okay with that. I do wonder, Jeff, if it’ll be an issue for you or if I’m just overestimating what I saw.”

Wells to Willman: I’ll hold off until I see the Bluray, but this sure sounds like Criterion. I’ve never been aware of any strong grain presence in this film, but if your assessment is correct I guess we’re all going to have to get used to one.

I got the usual two hours of sleep (if that) on the LA-to-NY redeye. Whipped isn’t the word. Everything was either a struggle or an irritation as I trudged around Newark airport, frowning and scowling and staring at my iPhone screen. By the time I got to the corner of Sixth Avenue and 42nd Street to catch the F train down to my Brooklyn rental, I decided I just couldn’t lug those fucking bags down three flights of stairs, and then lug them back up again. So I popped for a $35 cab ride. My crib is on 11th Street near Prospect Park. I dropped the bags off and went over to the park and took a 45-minute nap on a bed of pine needles, in a nice shady spot. Now I’m sitting in a Connecticut Muffin on the southwest corner of Prospect Park. Montgomery Clift is buried in a Quaker cemetery not far from here. 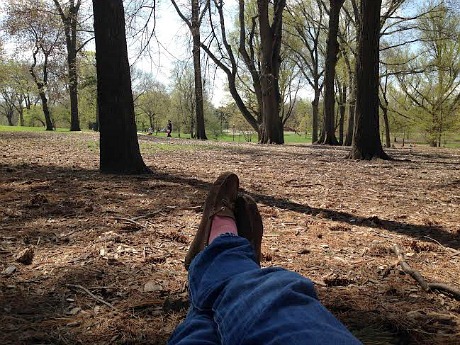 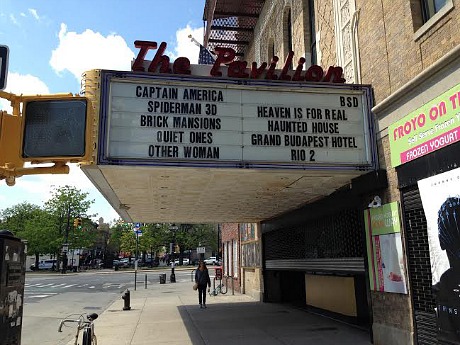 24 Comments
Star Wars Grouch, or Get Off My Sci-Fi Lawn

Lewis Beale has posted a CNN.com piece about how the Star Wars franchise ruined the reputation of big-screen science fiction by dumbing it down and aiming at a younger, less thoughtful demographic. What he essentially means is that the huge popularity of Star Wars mde it easier for studio execs to nudge aside weightier, more thoughtful sci-fi projects.

“Science fiction is in fact one of the most creative literary genres around,” Beale reminds. “The best of sci-fi is filled with meditations on what’s out there, what makes us human, how technology is used and how it is changing us. It takes up issues of race, sexuality and quite literally everything else under the sun. It is essentially about ideas, not action, and that’s the problem, as far as Hollywood is concerned.

Last night Vulture‘s Kyle Buchanan filed a limited but interesting reaction to the first press screening of Gareth Edwards‘ Godzilla (Warner Bros., 5.16), to wit: the beast is camera-shy and doesn’t really show himself until the very end. “[If] you throw everything you can at the screen, you’ve got nowhere else to go,” Edwards told Buchanan after the screening. The goal, he said, is “not to frustrate the audience, but to tease them. It’s kind of like cinematic foreplay. [We’re trying] to incrementally build and build. So hopefully, you get the big climax at the end and it has the maximum power possible — and then it’s the end credits.”

The Godzilla review embargo prevented Buchanan from saying any more. The embargo lifts on 5.10 at 10pm Pacific. In fact the first reviews will be out a few hours before that, or a couple of hours after the big public premiere screening in Paris on Saturday, May 10th, which yours truly will attend and review from. It’s quite possible (though far from certain) that I’ll be the only American lone wolf on the Godzilla beat in Paris that evening. Johnny on the spot, can’t wait, bated breath, etc.