Exhibition scholar and aspect-ratio authority Bob Furmanek has posted what appears to be the most fully researched and most definitive study of the aspect ratio changes implemented by the major studios in 1953, a.k.a. “The First Year of Widescreen Production.” The study will “hopefully help to dispel many of the myths associated with this era,” Furmanek writes. He’s done some very good work here and hats off, but it won’t dispel the HE aspect-ratio theology any time soon. Because Furmanek’s work will be used to justify 1.85 and 1.75 aspect ratios for 1950s films on Bluray and Hi-Def streaming, and that is just wrong. The Movie Godz will tell you it’s better to open things up and let the light and space into the frame. Boxy is better and beautiful. The 1.37 version of Sabrina on Vudu is much more captivating than the 1.75 Bluray version that recently popped. For the 167th time, nobody needs to give a shit any more about the fear of television that was motivating the major studios 60 years ago. That was then and this is now. Just throw the research out the window. We can remaster old films any way we want these days. Screening Shane at 1.66 was an abomination, but Furmanek simply reports that it was presented that way in all the big urban theatres without comment. Those who care about this stuff need to wean themselves off history. At the very least alternative versions of ’50s films (1.37 plus 1.66 or 1.75 or 1.85) need to be presented. Free your mind, free your souls, and reject the office-of-Orson Bean-in-Being John Malkovich cropping that Furmanek and his ilk are still pushing for. Remember the triple-aspect-ratio Criterion Bluray of On The Waterfront, and move forward.

Due respect to J.J. Abrams, but it seems like a terrible idea to cast Mark Hamill in a cameo role in the currently-shooting Star Wars Episode VII. Right now, Hamill looks more like Jabba the Hut than Luke Skywalker, and it’ll just be too great of a shock. Harrison Ford looks like an older-but-still-studly Han Solo and that’s cool, but Hamill looks like a wreck. I’m not chuckling or gloating at this. From Hamill’s Wikipage: “In September 2013, Robert Englund said that Hamill, a longtime friend, was currently working out in the gym. ‘Mark now…they’ve got Mark in the gym, because Mark’s coming back as Luke Skywalker. They’ve got him doing his sit-ups.’ It was previously reported that both Hamill and Fisher had been assigned nutritionists and personal trainers to work with ahead of production.” 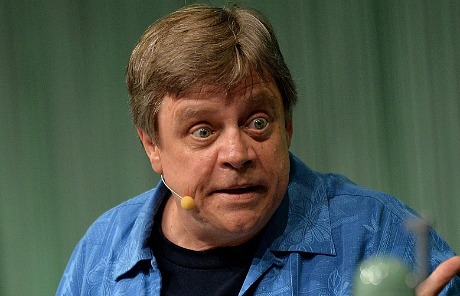 I finally saw Jon Favreau‘s Chef today…one of the last press guys on the planet to do so. (The Wall Street Journal‘s Joe Morgenstern, Salon‘s Andrew O’Hehir and grumpy Lou Lumenick were at the same noon screening.) I had gotten an impression from speaking with Indiewire‘s Eric Kohn that Chef is negligible fluff, but it’s too engaging to be dismissed as such. It’s basically a celebration-of-good-fortune movie…a celebration of perfect, scrumptious art-food (the cooking and serving shots are to-die-for), of clever guy humor and pothole-free narrative charm, of Favreau’s acting and writing skills (as well John Leguizamo and Robert Downey, Jr.‘s)…okay, it’s fluff but it’s very tangy and alive and well-constructed fluff. It never once reached in and got me in that deep-down place, but I never felt the least bit irked or antagonistic toward it. It’s a nice easy cruise, this film. There’s really no substantial reason to put it down with any passion. In fact, Chef is so well crafted and engaging and satisfying that I forgot about the weight issue that I’ve mentioned once or twice. I still say that if Downey had Favreau’s role instead of a cameo, Chef would be that much more engaging. Because it would be. There’s something about a guy with a weight problem that goes against the basic grain of escapism, which is what this movie is basically selling. But I forgot about it. Or at least, it didn’t get in the way. Coming from me, that’s a serious compliment. Cheers also to costars Sofía Vergara, Scarlett Johansson, Oliver Platt, Bobby Cannavale and Dustin Hoffman.

A second lawsuit filed by a former teenaged “twink” against Bryan Singer was announced yesterday by attorney Jeff Herman. The plaintiff is anonymous and British and younger than the first plaintiff, Michael Egan, as he claims to have been violated at a tender age at a Superman Returns after-party, or eight years ago. A statement reads that the plaintiff has only recently become cognizant of the “psychological and emotional injuries, mental anguish and loss of enjoyment of life” as a result of the alleged sexual abuse. Translation: the plaintiff read about Egan’s lawsuit against Singer and figured he could join in.

Singer has led a libertine life over the past 18 or so years. No one’s disputing that. Perhaps an age-of-consent line was inadvertently crossed once or twice, but powerful Hollywood types have been liberally partaking of sexual opportunities with young, looking-to-break-in partners for a long, long time. It’s how things have operated since the days of the Jesse L. Lasky Feature Play Company and the 1914 release of The Squaw Man. Favor for favor. An industry friend believes that Herman is on to something and that many more plaintiffs will be coming forward once the momentum really starts.