I chuckled several times during Saturday night’s sold-out public premiere of Gareth Edwards‘ Godzilla (Warner Bros., 5.16) at Le Grand Rex in Paris. And three or four times I laughed out loud, which is saying something considering that my legs were aching due to the cramped balcony seating. For me, chuckling and laughing at a monster film is a thumbs-up reaction. It means I’m having a fairly good time, which Godzilla definitely provided until the finale. Overall it left me feeling cranked up and a bit surprised in a “wait…what?” sense of the term and yet taken care of for the most part. It’s not a great monster film but a very good one, I feel. Or at least until the end. It’s a hell of a lot better that the 1998 Roland Emmerich and Dean Devlin version, I can tell you that.

The best blow-your-socks-off sequence, I feel, comes around the middle — a monster- attack-on-Honolulu sequence that includes a big tsunami crashing and racing through the streets and wreaking all kind of non-consequential, eye-popping destruction — ten if not twenty times what this city suffered through when Michael Bay staged his Japanese aerial attack in Pearl Harbor (’00). The swelling wave effects are pretty damned persuasive, I must say. In fact nearly every damned visual effect seems at least above average. On a purely technical level Godzilla is one hell of a ride.

And I loved, loved, loved seeing Las Vegas get levelled all to hell. Like the original 1954 version that started the franchise, Edwards’ Godzilla is supposed to be a metaphor about nature’s wrath pushing back against man’s industrial arrogance and technological excess. It therefore seemed fitting if not delightful that the “worst money-grubbing place in the world” (which I’ve never had any love for, unlike Ben Affleck and a million other guys who actually worship the place) should be one of the cities to pay the price. I laughed and almost cheered when I realized what was happening to this overdeveloped shithole. Eat it, Steve Wynn! Maybe you’ve been crushed to death under the rubble of your own hotel. Just desserts, asshole!

And I liked the fact Edwards tones Godzilla down for most of its running time. Over and over he uses suggestion — visual and aural hints and implications — instead of blatant show-and-tells. He deserves admiration for delaying Godzilla’s first big MCU roar until the two-thirds mark and also holding back on the trademark fire-breathing until the big super-finale, in which San Francisco gets it but good.

The following image is from a comment thread below a David Poland riff about an economical solution to cell phone usage during the Cannes Film Festival. Hey, David…why not ease up and drop by the La Pizza gathering on Tuesday night? Life is short. We don’t have to sit next to each other or chat too much. Relax and enjoy. 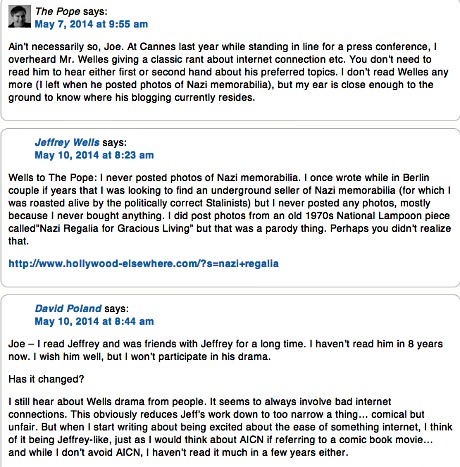 This appears to be more or less a re-heating and re-shuffling of Sam Raimi‘s A Simple Plan. That Scott Rudin-produced Paramount release is now 15 and 1/2 years old, but it seems better and better the more I think back upon it. Scott Smith‘s screenplay was based on his novel of the same name. Bill Paxton, Billy Bob Thornton and Bridget Fonda were never better. Thornton snagged a Best Supporting Actor Oscar nominated, and Smith was nominated for Best Adapted Screenplay.

This is obviously…okay, seemingly of a very high order. Maybe. If your idea of “a very high order” is a mixture of Runaway Train, the “political exiles on a long ride to the Urals in a cattle car” sequence from Dr. Zhivago (which incidentally contains my beloved “I am the only free man on this train!” scene with Klaus Kinski) and the “realistic” CG panache of Robert Zemeckis‘s Polar Express. I’m also figuring you can’t go wrong with Tilda Swinton in a scenery-chewing mode

I don’t know what crawled up the ass of the Parisian Weather Gods but the air was like mid-November when I stepped out of Charles DeGaulle airport this morning around 8:30 am. Not to mention the gusty breezes…how much would it cost to buy a winter overcoat? Not to mention the misty moisture that wasn’t quite rain but was close enough. Not cool, not welcome. Where the hell is global warming when you really need it? Took the good old Roissy bus into town. My Airb&b sublet in the 17th wouldn’t be ready until 1 pm so my landlady let me drop my bags off at her place. Enjoyed a nice omelette and two cafe noirs at a Montmartre cafe but the wifi (boldly promoted on a sign outside this humble establishment) was on the fritz. It wasn’t exactly cost-efficient to buy a scarf but I was chilly and uncomfortable so I got one. The sublet is in a downmarket area of the 17th (near the La Fourche metro stop) but it’s not too bad. The place itself is terrific — quaint, cozy, homey. The Godzilla screening at the Rex starts in a couple of hours. I guess I’ll just come back here to write the review. 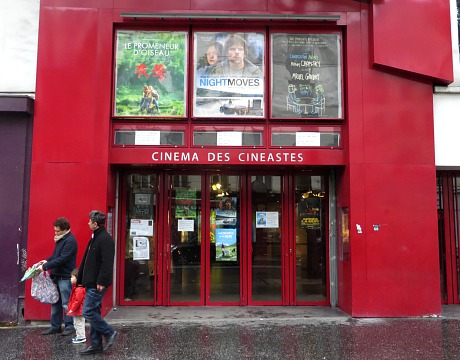 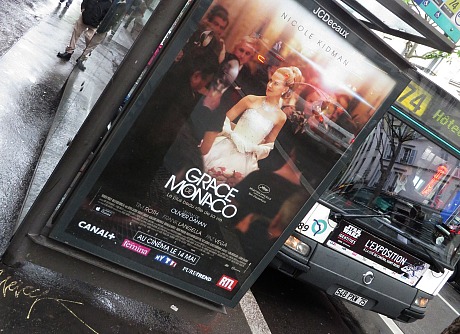 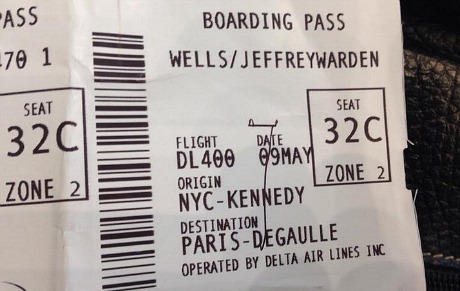