Support on Patreon Follow @wellshwood
17 Comments
See What I Mean?

The first Annie trailer popped on March 5th or thereabouts. Now we have a newbie, which is smartly cut and rhythmic and so on, but which basically delivers the same spunk and pizazz. We’ll probably see version #3 sometime around Labor Day, and then version #4 in early November. And then it opens on 12.19. So eight more months of this and then the Oscar campaign, which HE, of course, will be delighted to banner. It still looks like spirited wealth porn, which there’s an audience for above and beyond the fans of the stage musical and the 1982 John Huston-directed screen version. As I said before, if the new Annie turns out to be half-decent Quvenzhane Wallis…well, let’s see what happens.

Ari Folman‘s The Congress debuted at Director’s Fortnight in Cannes a year ago and got all kinds of nice attention and good reviews. Then it more or less vanished. Now it’s being trailered for commercial release on 8.29 via Drafthouse Films and Films We Like, but it feels like old news at this point. Robin Wright, more or less playing herself, agrees to be digitally replicated for use in various media but, of course, there are complications. Costarring Kodi Smit-McPhee, Danny Huston, Harvey Keitel and Paul Giamatti. The title is awful, a non-starter.

Quentin Tarantino in Cannes a few days ago: “As far as I’m concerned, digital projection and DCPs is the death of cinema as I know it. It’s not even about shooting your film on film or shooting your film on digital. The fact that most films now are not presented in 35 millimeter means that the war is lost. And digital projections, that’s just television in public. And apparently the whole world is okay with television in public, but what I knew as cinema is dead.” HE response: Except for an apparently still-unsolved problem with inky blacks, digital projection is heaven for me. Movies these days don’t just look better on big screens — they look and sound extraordinary. QT is just sentimentally or romantically attached to the organic 35mm experience of the ’70s, which Grindhouse was a huge tribute to. He can have it. Too many green scratches and sound pops, not to mention those occasional faulty reel changes. I used to be a projectionist so don’t tell me. Eight at the gate.

In Ryan Murphy and Larry Kramer‘s The Normal Heart (HBO, now airing), a wrenching drama about the dawn of the AIDS crisis in the ’80s, Mark Ruffalo‘s Ned Weeks, a stand-in for Kramer, angrily pushes an initially resistant gay community and the political establishment to face up to the epidemic and stop hiding their heads in the sand. In the view of N.Y. Times critic Neil Genzlinger, Ruffalo/Weeks “is incredibly irritating (as he’s supposed to be)…all annoyance, all the time; no empathy for him allowed, even though, at this point, we know he is on the right side of history.”

There’s a passage in Tom O’Neil and Michael Musto‘s just-posted Gold Derby discussion of the upcoming June 8th Tony Awards that caught my attention. Musto predicts that Byran Cranston will win Best Actor for his ball-of-fire portrayal of Lyndon Johnson in All The Way (which I saw earlier this month), but his caveat about Cranston not really playing the “laconic” Johnson Musto remembers is beside the point. (Here’s the mp3.) He’s correct in observing that in public appearances Johnson was no firecracker and did, as Musto notes, sound a little bit “like Huckleberry Hound.” But even though he doesn’t attempt to mimic Johnson’s laid-back South Texas drawl, Cranston is playing the real, behind-the-scenes, wheeler-dealing LBJ — the man behind the curtain.

11 Comments
We Don’t Need No Platisher, or The Pushback

In a 5.25 article about Medium, a site/app for telling and reading stories, N.Y. Times “Media Equation” columnist and ex-Bagger David Carr has ignited a mini-Twitter shitstorm by calling the Evan Williams-led operation behind Medium a “platisher,” which Sulia CEO Jonathan Glick defined last February as “both a platform and a publisher.” The Twitter reaction to Carr’s mention of the term was instantaneous. No way, get outta here, shove it, etc. Why the hostility? I can only explain my resistance. A new term works or not depending on the sound of it. If it sounds fleet and cool, it’s in. If it sounds twerpy or dorky, forget it. Nonsensical as this may sound, platisher sounds to me like a mixture of platypus and phisher. Nuff said. Into the wolf pit like Ernest Borgnine in The Vikings…”Odin!!!” 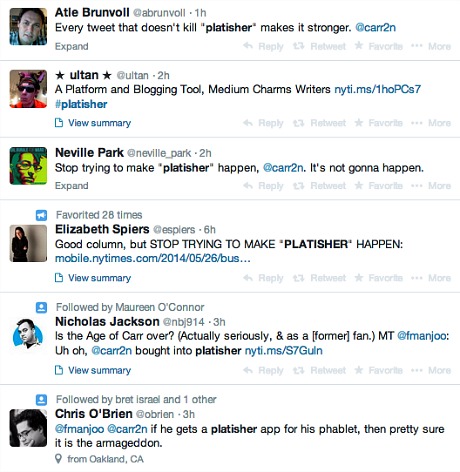