Day-After Flashback: I was a bit southeast of Long Beach on the 405 around 5:20 pm when rush hour hit. Instant parking lot, no point. So I got off and consulted Yelp and drove over to a Starbucks in a bedroom community called Fountain Valley. (I saw no fountains or valleys but I did see an endless sprawl of soul-less corporate chain stores.) The Starbucks was spacious and quiet and soothing to hang in — an oasis surrounded by soul-numbing emptiness. I sat in a nice comfy leather chair and tapped out two or three stories and then I leaned back and closed my eyes. I woke up two hours and 15 minutes later (or around 8:35 pm) — same position, nothing stolen, iPhone in my pocket, Macbook Pro on my lap. But my head was a little foggy. I looked at this trailer for Frontera and thought, “Ed Harris is basically playing a Tommy Lee Jones role here.” And so I tapped out the title of this post and got up and walked across the sprawling parking lot and got in the car and drove back to WeHo.

I drove down to Tijuana this morning (another dental appointment) and then made my way back this afternoon. It took almost two full hours of bumper-to-bumper traffic to get through the U.S. border checkpoint. Anyway, as I was idling and enjoying the warmth of the Mexican sun on my left arm, I discovered a piece on The Awl that seemed at first glance to be a reasonably comprehensive abridged history of the rise and fall of Entertainment Weekly, for which I served as a freelancer from ’91 through ’96. The author is Anne Helen Petersen, who was just a tyke when EW began publishing 24 years ago. I sent the piece to a couple of ex-EW staffers but no replies thus far. It’s composed from the perspective of upper-echelon staffers. I could have used a few more anecdotes and first-hand recollections but it’s not a bad stab for an article of this size. Petersen excerpt: “Some would suggest it [it’s not] the content but the delivery system. Who wants to pay for a magazine, delivered once a week, when you can find deeper, more visual, more immediate content online and for free?” 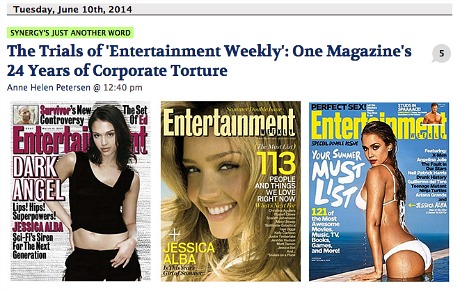 Genuine verisimilitude in the depiction of 20th Century warfare (such as Stanley Kubrick‘s depiction of WWI trench warfare in Paths of Glory) is out the window these days. I despise this state of affairs but I accept it. All 21st Century action-conflict movies are more or less expected to (a) somehow out-perform the last similar action-conflict movie in terms of outrageous grandeur or explosions or audacious visual effects and (b) have to deliver X-treme action scenes that defy basic physics and blow your socks off. I don’t know how David Ayer‘s Fury (Columbia, 11.14) will actually play, but I’ll be flabbergasted if it doesn’t follow these mandates.

The Telluride Film Festival has never been primarily about showing classic films or staging tributes to this or that legendary figure. It’s always been a here-and-now-and-into-the-future type of thing. So why create a festival poster full of sprocket holes? “I decided to celebrate celluloid at a time when the old analog medium is being replaced by digital technology,” artist Christian Marclay has written. “I also wanted to show how cinema is an art of collage — fragments are collected and assembled to tell a story. The filmstrip with its sprocket holes and optical sound track is instantly recognized as the universal symbol for film. I wonder what will replace it?” Well, that’s the creative challenge in this instance, isn’t it? 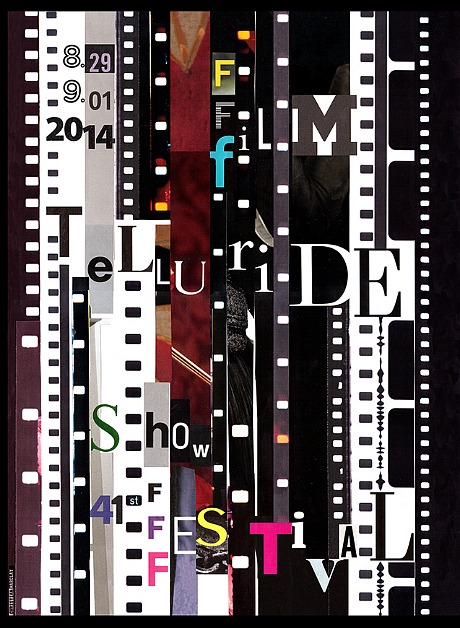 Hillary Clinton will be elected president in 2016 despite the fact that she’s never been particularly likable. But she’s smart and savvy and tough enough for the job, and that’s the bottom line. I’d always respected her until she went low and dirty during her 2008 primary battles with Barack Obama (i.e., pandering to white-yokel prejudices). That prompted a re-assessment. But she’s going to win in ’16 — guaranteed. Just about every woman in the country is going to vote for her for gender-empowerment reasons. The right will do everything they can to tarnish her (i.e., blood thinners, Benghazi) and it won’t matter. In fact their attacks will probably help among woman voters. There’s nothing they can do. How can she lose?

The actions of Bob Bergdahl prior to his son’s Bowe‘s release are “now under increased public scrutiny. Was he a worried parent who would do anything to gain the release of his child as the U.S. government’s efforts lagged? Was it, as some have suggested, a secondhand case of Stockholm syndrome, in which hostages express empathy for their captors? Or was it something more — an aggrieved American family that had come to doubt its own country? Bob Bergdahl, many say, was waging his own undeclared war at home.” — from a 6.4 L.A. Times story by John M. Glionna.

My feelings about the Afghanistan military campaign are probably similar to Bob and Bowe Bergdahl’s in some respects, but Bowe’s desertion sounds to me like an act of a mentally unstable asshole, particularly since his desertion led to a search party that resulted in the deaths of fellow combatants.

I’ll always have a soft spot for Shailene Woodley for her gracious response to my having accidentally whacked her across the chops during a Descendants party in Telluride three years ago. Because she cut me a nice break I’m determined to cut her one from here to eternity. That said, the photo on the cover of the new Vanity Fair makes her look too honed-down or something — the vibe feels a little too fine and exacting. But the most interesting riff since last weekend’s surprise success of The Fault In Our Stars is Matt Patches‘ Vulture piece accusing Ansel Elgort‘s Augustus Waters as a vaguely creepy “manic pixie dream guy.” It’s all hard to refute, but I liked Elgort’s performance anyway — the charm and charisma had a lulling effect. I sat there saying to myself, “This guy’s got it.” 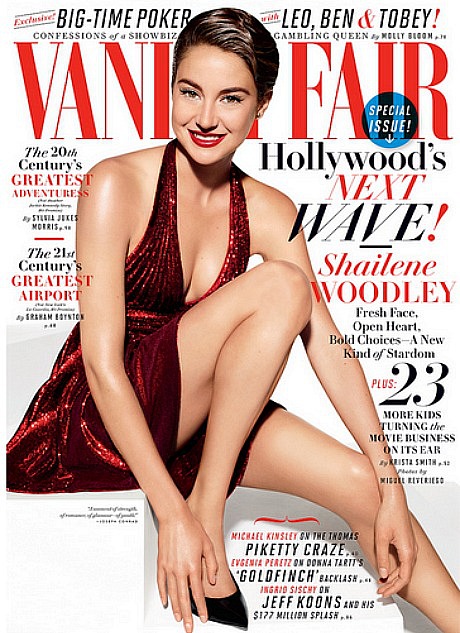 In a 6.7 Observer piece, Phillip French offered a rote analysis of Kirk Douglas‘s Chuck Tatum, an avaricious journalist, in Billy Wilder‘s Ace In The Hole (’51): “Like the tarnished heroes of Double Indemnity, The Lost Weekend, Sunset Boulevard and The Apartment, Tatum is a characteristic Wilder protagonist, a self-loathing anti-hero on his way down and eventually finding redemption or salvation as he approaches rock bottom. [The film] is morally gripping and unsentimental in its refusal to give the audience an easy point of sympathetic identification.”

In fact Ace In The Hole offers a much darker and more rancid portrait of a self-loathing character that the other Wilder films mentioned. I’ve always felt at least some measure of affection or compassion for Sunset Boulevard‘s Joe Gillis, Double Indemnity‘s Walter Neff and The Apartment‘s C.C. Baxter. These guys had ethical issues but were obviously human in various respects. (Baxter was pretty much a cuddly love bunny.)

Tatum isn’t inhuman as much as a conceit — Wilder’s concept of cynical behavior pushed to level 11. A snapping turtle, a piss-and-vinegar reptile from start to finish. His only half-tender moment is when he rhapsodizes about the spiritual glories of New York City. The last time I watched Ace in The Hole (on a Criterion DVD) Tatum began to piss me off. Is there anything about him that isn’t fueled by resentment and spit?