Yesterday I happened to notice that Brutal Youth author Anthony Breznican (otherwise and more routinely known as the high-profile Entertainment Weekly movie writer) is signing copies of his book this evening at Santa Monica’s Aero Theatre, more specifically before a screening of Jason Reitman‘s Young Adult at 7:30 pm. (Signing begins at 6:30 pm.) I wrote Breznican and asked what was up. Is Reitman a fan of the book or something? Is he thinking about adapting it into a film? 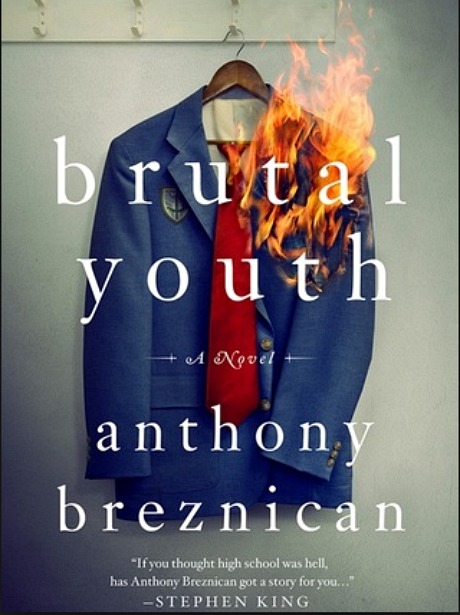 Breznican’s response (in part): “I would be thrilled if Jason felt like adapting my book, but no bullshit — that is not the case. He has a full slate, and that’s not in the cards. The thing this evening is strictly casual, strictly friendly.

What did the proverbial room feel like while Jersey Boys was playing, and what was the after-vibe as the crowd shuffled out? Obviously $13.5 million isn’t that great for an opening weekend, and even if it triples this a final gross in the mid 30s has to be seen as a flop for a film that cost $38 million to shoot, not counting marketing costs. What I’m sensing is that the none-too-hip 60-plus crowd is fairly pleased with Boys and that it might have longer legs than anticipated….maybe. How did it play? Did anyone notice any under-40s?

I wouldn’t pay to see Michael Bay‘s Transformers: Age of Extinction (Paramount, 6.27) with a knife at my back, but even if I was half thinking about going I would be having second thoughts because it just hit me that it runs 165 minutes. If anything a film like this should run shorter (85 or 90 minutes), like any overripe, over-cranked assault movie that promises an audio-visual pummeling until it hurts.

Fox Searchlight will release Michael Roskam and Dennis Lehane‘s The Drop (formerly known as Animal Rescue) on 9.12.14, or right smack dab in the middle of the Toronto Film Festival. I don’t know if anyone’s seen or reviewed this Boston-set crime drama, but the trailer is selling a variation on the old Charley Varrick formula (mob money stolen by cowboys), etc. It’s also about a bartender (Tom Hardy or James Gandolfini?) who rescues a puppy found in a garbage can, which of course results in all kinds of bile and rage from the dog’s abusive and mentally unstable former owner (played by…?). Costarring Noomi Rapace, Matthias Schoenaerts, John Ortiz and James Frecheville.

I saw Roman Polanski‘s Venus in Fur at the tail end of the 2013 Cannes Film Festival. It finally opened two days ago (6.20) via Sundance Selects. “Spoken in French, it’s a one-set, two-character piece that’s set inside a smallish theatre in Paris during an evening rainstorm, and which began as an English-language play by David Ives,” I wrote on 9.24. “It was re-written by Ives and Polanski for the screen. It seems to mirror on some level the relationship between Polanski and his wife Emmanuelle Seigner, who costars along with Mathieu Almaric, who portrays the Polanski stand-in, a stage director, and who vaguely resembles the younger Polanski of the ’80s. Other than that it’s…well, I don’t want to abruptly dismiss any work by a great filmmaker but it really does feel like a minor work in a minor and restrictive key. Seigner delivers a snappy, saucy, highly-charged performance — I’ll give her that.”

Yesterday’s trailer posting for The Good Lie prompted a friend to remind me that this Imagine/Alcon/Warner Bros. release (opening on 10.3) would most likely be collecting dust at Paramount if it hadn’t been for the efforts of screenwriter Margaret Nagle. Nagle wrote the script roughly ten years ago, or in the wake of Megan Mylan and John Shenk‘s The Lost Boys of Sudan, a 2003 documentary. (Nagle’s script was allegedly referred to in development circles by the same title.) The project sat at Paramount for five years without a discernible pulse, and then Nagle took advantage of a WGA regulation that allows writers of projects that have languished in development to reclaim them after five years. Dallas Buyer’s Club screenwriter Craig Borten revived that project the same way, saving it from development tedium at Universal. Nagle eventually set Lost Boys up with the fellows at Imagine and Alcon, which gradually led to Reese Witherspoon‘s coming on board in July 2013. “Sometimes the writer matters,” my friend says. Yes and good for that, but if Nagle really did rescue the Lost Boys project from a flatline situation at Paramount and then re-launch it with Imagine and Alcon and so on, why doesn’t she have a producer credit? Doesn’t that seem like a fair thing, that she would get a producer credit? Mainstream Hollywood answer: Sorry but no. You don’t get a producer credit because you’ve been tenacious and resourceful. You get a producer credit by fighting or muscling your way into the inner production circle and then baring your fangs and claws just as fearsomely as the other guys. 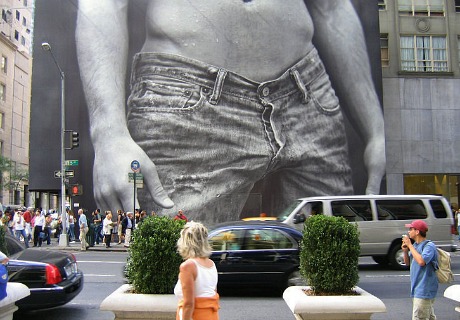 Snapped on Fifth Avenue during the summer of ’09. (I think.) I honestly feel this is among the best midtown Manhattan shots I’ve ever taken. 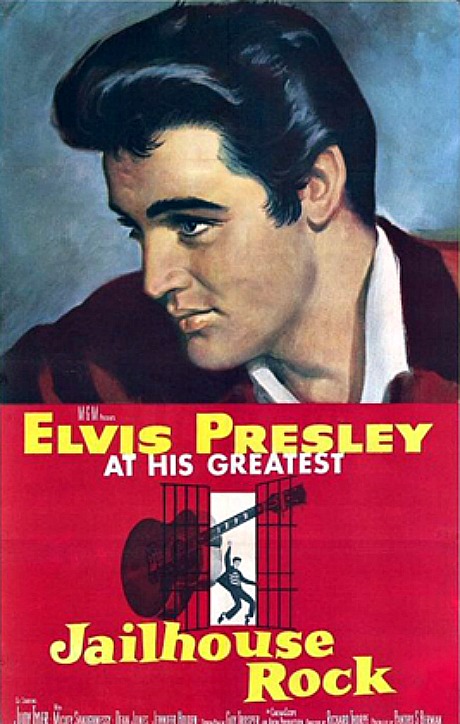 The guy with the sharply-chiselled features in this 56 year-old one-sheet for Jailhouse Rock (’58) has an Elvis Presley-like appearance, but he never looked like Presley himself. Presley had a sultry, slightly more feminine face. You know who this guy DOES resemble, and I mean closely? Jersey Boys costar Vincent Piazza, who plays Tommy DeVito. 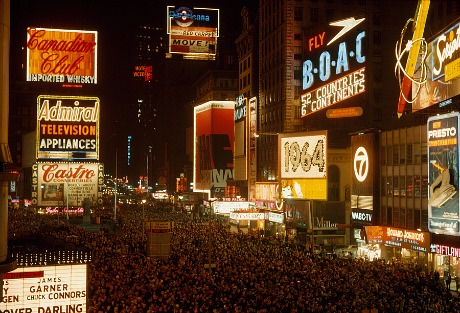