A friend who’d never seen Lewis Milestone, Aaron Rosenberg and Marlon Brando‘s Mutiny on the Bounty (’62) said he’d be catching it tonight at the New Beverly, where it was being shown in 35mm. It won’t be worth it, I replied. I like the idea of the New Beverly as much as the next guy, but it’s never been anything special projection- or sound-wise. It’s certainly no place to see a large-format film that was meant to be savored on a big, super-wide screen (if not at the ideal 2.76:1 aspect ratio then at least 2.55:1) with six-track, well-amplified directional sound. But I nonetheless imagined that Brando’s Bounty might look better than I expected, and so, like a moron, I went there tonight and took a seat in the second row. It looked like dogshit. Dupey, brownish tones, substandard projection lighting (I’d say around 8 foot lamberts, or 6 lower than the ASCAP standard) and nowhere near wide enough. The New Beverly doesn’t even present a true Scope aspect ratio (i.e., 2.35:1). It looked to me like 2.25:1. Robert Surtees shot Bounty in Ultra Panavision 70 (2.76:1), and his work looks terrific on the Warner Home Video Bluray. The New Beverly not only took a dump on Surtees’ efforts tonight, but on everyone who paid money to see their abysmal 35mm presentation. I left after ten minutes. My own damn fault. 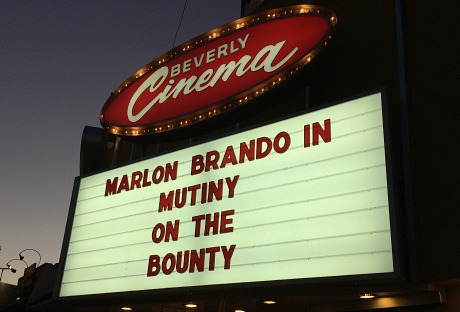 A flattering approximation of how Mutiny on the Bounty looked tonight at the New Beverly — dupey textures, brownish colors, insufficient 2.25:1 aspect ratio. It actually looked worse than this, browner and less sharp.

Another approximation of tonight’s projected image at New Beverly.

This has been a bad filing day but I too saw Sex Tape the other night, and I have to say that while I only laughed once (i.e., a bit of slapstick about slugging a dog and knocking him unconscious), I wasn’t in pain for the most part. It’s very hard to make a frenetic slapstick comedy work, and this is a straight-ahead, not awful, reasonably inventive try. I don’t know how sexually risque the premise is, but it’s been launched with a fairly intelligent attitude and what I regard as self-aware, non-ludicrous dialogue. I felt marginally engaged, not bored, somewhat amused. How’s that for a quote line? “I didn’t laugh — well, I laughed once — but it didn’t make me feel miserable either” — Jeffrey Wells, Hollywood Elsewhere. I honestly liked it a bit more than 22 Jump Street, which I hated. There’s a cameo from a well-known funny man that is more than just a “cameo” — it’s a tender moment. More tomorrow.

“I wasn’t expecting that much from Lynn Shelton‘s Laggies (A24, 2.26). I was actually a bit fearful before tonight’s Eccles screening. Having more or less hated Touchy Feely, I thought she might be on a downturn. But surprise — Laggies is the best Shelton pic since Humpday (’09), and that was essentially a bromance. Laggies is a Keira Knightley movie aimed at women and couples, but I swear to God Shelton and screenwriter Andrea Siegel get it right. The only problem is that Knightley’s character lies her teeth off in almost every scene or something like 80% of the film. She doesn’t lie emotionally or behaviorally in our eyes but she’s almost constantly fibbing to…you know what? This needs a more thorough explanation and I can’t tap one out in the back of a moving cab.” — posted on 1.17 during Sundance Film Festival. 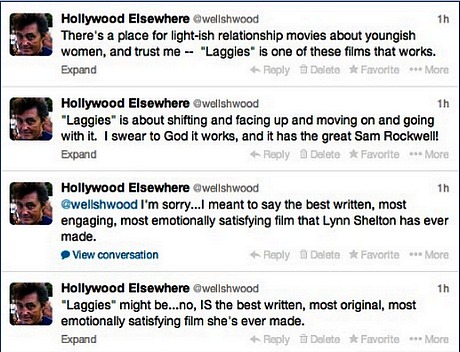 I hate the narrator’s voice at the beginning of this trailer. The guy thinks he’s narrating an apocalyptic disaster movie costarring Bruce Willis and Antonio Banderas. All purring machismo, that Don LaFontaine sound. He should try a little discipline. I like to tell myself that my carbon footprint is a bit less now that I’m mostly getting around on a 400 cc Yamaha scooter. (I only use the regular wheels when it rains.) I know I only spend $20 to $25 weekly for gas, if that. $10 or $12 per fill-up, two fill-ups per week if I’m really running around. Yes, I know — to be truly carbon-averse I should be walking or riding my bike all the time. But I don’t live in Amsterdam, you see.

Eddie Murphy did James Brown two or three times on Saturday Night Live, but the Delirious version is my favorite. 31 years ago and obviously old hat, but now it’s renewed hat with Get On Up opening on 8.1. How good is Chadwick Boseman‘s Brown? Pretty good, I’m hearing, but Murphy’s, for me, will always be the shit. How hard is it to do Brown? Just (a) get raspy and snappy and gravelly and (b) ignore your consonants. Concentrate on mood sounds rather than words.

As noted, so far the Get On Up trailers have emphasized the glossy peppy side of James Brown’s persona and performances along with a little taste of some underlying personal issues. They’ve also indicated that Chadwick Boseman was chosen to play Brown at least partly because of his charm and good looks. This new clip indicates a bit more, sombers things up, etc.