Earlier this month I mentioned that I’d heard “convincing chatter” about Chris Nolan‘s Interstellar possibly debuting sometime during the span of the 52nd New York Film Festival (9.26 through 10.12), “although the most recent buzz says that Interstellar could play Telluride first.” Now I’m hearing that Nolan’s time-travel film, an 11.7 Paramount release, may not…uhm, let me phrase this carefully. So far, I’m told, there’s been a reluctance on Nolan’s part to screen the film for reps of at least one of the hot-shot fall festivals. That means he’s probably saying the same thing to all the other reps. Interstellar is understood to be a very effects-heavy film, but Nolan can’t play this “not ready” game much longer. Interstellar may not be ready to screen for festival programmers right now (i.e., 7.19) and it may not ultimately be ready to screen at the Telluride or Toronto festivals, which span from late August to mid September. But it would have to be ready to theoretically close the New York Film Festival on Sunday, 10.12, which would be less than four weeks before the commercial opening. Bottom line: If there was a serious interest on Nolan’s part to premiere Interstellar at one of the early fall festivals (New York being the most favorable in terms of post-production leeway), he would be playing ball at this stage by letting certain persons see it in whatever form it happens to be. But so far he hasn’t, I’m told. Read into this what you will.

I’ve never been much of a fan of John Ford‘s Monument Valley westerns. I “respect” them as far as it goes but I’ve never been able to get around the fact that it’s completely ridiculous for a community of any kind (settlers, soldiers) to be living in a place about as life-nurturing as the surface of the moon — no river or grass so you can’t raise cattle or grow crops or do anything except savor the scenery. (I’ve been to Monument Valley so don’t tell me.) On top of which I’ve never really cared for Ford’s collaborations with Henry Fonda — My Darling Clementine, Fort Apache, Young Mr. Lincoln — as they’ve always seemed…I don’t know, kind of smug and even lazy on some level. Fonda always seems to be posing in these films. Plus I’m generally sick of the Earps vs. the Clantons…I just don’t want to do that whole O.K. Corral thing again, no offense. So if it’s okay I’ll be taking a pass on Criterion’s forthcoming Clementine Bluray, 4K digital restoration or not. I’d pay $6 bucks to stream it but Criterion doesn’t offer that stuff…will they ever? 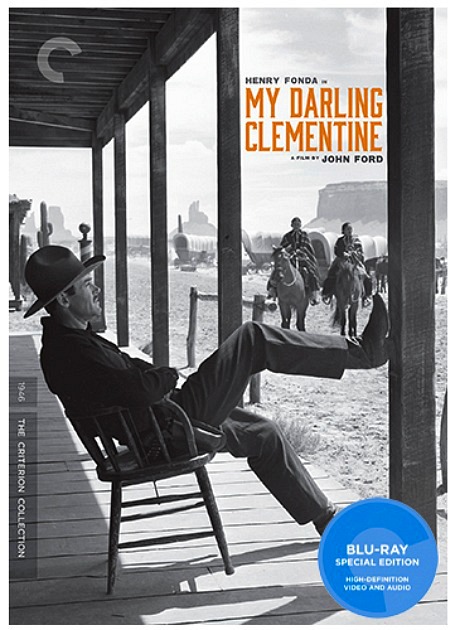 It was announced yesterday that Angelina Jolie‘s next directing project will be By The Sea, a smallish relationship drama costarring herself and husband Brad Pitt. It shoots next month (partly in Malta) with Universal distributing. Last May The Hollywood Reporter‘s Borys Kit wrote that “some insiders [are speculating] it could be a relationship drama that Jolie wrote several years ago, [about] a couple with issues who take a vacation in a last-ditch effort to save their marriage.”

Well and good, except with one or two exceptions husband-and-wife collaborations have not worked out. At the very least they’re spotty. All good films come about through creative collaboration and, to a certain extent, conflict. But the best ones are almost always the result of a single, all-powerful director being the absolute boss — a creative dictator whose vision and control is mostly unchallenged. (Or at least is not strongly interfered with.) It follows that this dynamic can’t prevail when a husband and wife make a film together as all successful, healthy marriages rest upon an understanding that they have a partnership to maintain, and that this means showing mutual respect and some deference and that neither party is the CEO…well, that’s not really true, is it?

20 Comments
If You Haven’t Read The Book…

“Mr. Putin gave some delinquent children a can of gasoline and a pack of matches, and he’s now shocked to see that they’ve started a fire.” — assessment offered yesterday during ABC News report about Thursday’s Malaysian air massacre in East Ukraine.